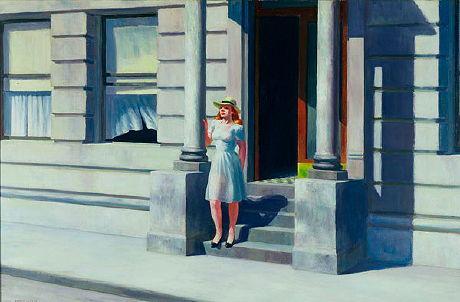 Hopper comes back to Paris

PARIS  During his first forty years he hardly sold one single painting. Now, nearly fifty years after his demise, he is a superstar. Edward Hopper (1882-1967) has the crowds rushing to the Grand Palais after having conquered Madrid. Why are we so fascinated by these images of a disincarnated world, in which any communication between the individuals in them seems to be interrupted, in which each person seems closed in an endless solitude? Is it because they describe a somber reality behind a smiling surface? Or is it because they synthesize an urban, indifferent and consumer century? All great artists allow for various interpretations  The exhibition insists on Hoppers Parisian years -1906, 1909, 1910  and on the break in 1924 where he finally met success at the Brooklyn museum though he had only sold one single painting in his life, at the Armory Show in 1913, where Duchamp created such a scandal. We may discover at the Grand Palais that this American icon of the XXth century is more metaphysical than realistic, a sort of American version of De Chirico
 Edward Hopper at the Grand Palais until 28 January 2013.

VIENA - Pierre et Gilles have been censored! The poster for the exhibition, an interpretation of the French national football team completely in the nude, was considered far too provocative, and it was removed. It still needs to be said though that their objective is quite brave. They wish to trace a landscape of masculine nudity in art from the XVIIIth century to today. This should please supporters of gender equality and the Gorilla Girls, who revolted against the fact that women need to be naked in order to access the Metropolitan Museum (85% of the nudes exposed are female). The exhibit offers us very varied approaches of the male body, from the academies in 1800 to Egon Schiele, including the Sicilian young men Von Gloeden fancied, including Andy Warhols silkscreen paintings and the disturbing Fillettes by Louise Bourgeois.
 Nude Men at the Leopold museum from 19 October 2012 to 28 January 2013

ALBA - The Fondazione Ferrero dedicates a retrospective to Carlo Carra, the metaphysical painter, a contemporary of De Chirico, and presents nearly 80 paintings. From 27 October 2012 to 27 January 2013.

PARIS  At the Cité des sciences, Léonard de Vinci, projets, dessins, machines, brings back to life numerous models from the universe of the genius of the Renaissance. From 23 October 2012 to 18 August 2013.

PARIS  The Collection Giuliana and Tommaso Setari offers a personal look on international contemporary art, a collection assembled over these past few years and presented at Maison rouge. From 20 October 2012 to 13 January 2013

PARIS  She died at the age of 43, five days after giving birth; she had time to become the mistress of Voltaire, of Maupertuis and of the poet Saint-Lambert, to write Commentaires sur les Actes des apôtres, Propos sur le bonheur and to start, with Voltaires help - he who saw in her a genius  the French translation of Newtons works. Emilie du Châtelet (1706-1749) can not be classified and she was the first woman to have one of her works, la Dissertation sur la nature et la propagation du feu honored by the French Academy of Sciences. This auction offers some of her manuscripts  the 174 pages of a Cours sur la géométrie, an Essai sur loptique, an Anatomie de loreille which all show the width of her interests, as well as various documents such as the inventory following her demise of her private home on rue Traversière.
 Emilie du Châtelet, ses travaux scientifiques & le château de Cirey at Christies on 29 October 2012

Dewar & Gicquel in a Duchamp mood

Saturday morning, like every Saturday morning during the FIAC, was busy with the traditional award ceremony of the prix Marcel-Duchamp, given by the ADIAF (International Association for the international diffusion of French art). It was given to a duo in 2012, and one could believe that as some sort of cosmopolitan complicity at a time when nationalisms seem to pop up this a brave promotion of Franco-British art. The pair made of Grégory Gicquel (French, born in 1975) and Deniel Dewar (British, born in 1976) enjoys other types of provocations. Their kaolin hippopotamus, their greyhound sculpted in oak but wearing real tennis socks, their Ferrari in marble from Castelnou, their glass sandals, are all inspired from great classical sculpture which they ridicule. This attitude is pushed to its extreme with the work rewarded, a body of a palmed feet diver

The webiste of ADIAF

One hundred drawings at the Louvre

The Louvre has such a quantity of magnificent works of art that we often neglect an important part of its patrimony, the drawings. The fund is inherited from the Cabinet du roi, then from the three keyed cabinet during the Revolution it was protected by three keys entrusted to three different persons  and today it has some 150 000 works of art. Arlette Sérullaz, the curator for various decades, drew up a hit-parade with numbers, very much the fashion in her time, but which reflects a true passion. Next to the eternal works of Watteau, Ingres and Géricault, one discovers names that are not as well-known by the public at large such as the mysterious Maître E.S. or the eccentric Gabriel de Saint-Aubin who spent his time drawing (they said he had caught drawing priapism from which he died, leaving a magnificent notebook known as the carnet Groult, that combined in a very modern manner, texts and drawings. In conclusion, a list of vocabulary helps to make the difference between tempera, wash drawing, stump and mounting
 100 dessins du musée du Louvre by Arlette Sérullaz, La Martinière, 2012, 256 p., 45

PARIS  Two new galleries have opened in Paris during the FIAC art fair, both with an Anselm Kiefer show: Gagosian at Le Bourget (Jean Nouvel architect) and Thaddaeus Ropac at Pantin (Buttazzoni architects).