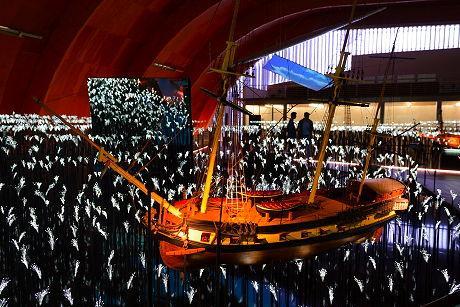 In Seville it is time for the comeback: Julio Iglesias has been announced after an absence of sixteen years while Placido Domingo has just triumphed at the Maestranza theater in a production of Thaïs by Massenet. The major city in Andalusia would like for things to be as they were for Expo 92, a period of prosperity. But the crisis is very present as we can see in the red light put on the project to enlarge the museum of Fine Arts, the second largest in Spain, while the rhythm of exhibitions has slowed down everywhere (we await impatiently the one dedicated to the Saints of Zurbarán, next spring). It is in hard times that the Renaissance can be prepared: though the church of Santa Catalina is desperately closed, various renovations works as at Santa María la Blanca, San Luís de los Franceses, the cathedrals Flemish altarpiece show the patrimony is still privileged. But the most encouraging sign is undoubtedly given by the Navigation Pavilion. This building by Guillermo Vázquez Consuegra, in the district of Expo 92 that slowly comes out of its sleep has been turned into a state of the arts museum, using avant-guard technologies Led, generalized interactivity, giant screens  to explain the major saga of discoveries. With the past lightened by an attractive museum environment we see that culture can also contribute to the revival

The crisis also nourishes the Grotesque

MALAGA - Ever since it was created at the time of the Renaissance, the term grotesque has seen an extraordinary posterity. In the beginning it referred to the strange drawings and decorations found underground, in a sort of grotto that was actually Nerons Domus Aurea ad was discovered by archaeologists at the time. The field of todays grotesque has no limits and artists have greatly been inspired by it, from Messerschmidt to Francis Bacon, including James Ensor, Otto Dix and of course, Picasso the host. The exhibit offers, through nearly 300 works by some 75 artists in a varied number of disciplines, including movies, a complete tour of the genre including contemporary creators such as Cindy Sherman or Bill Viola.
 El factor grotesco at the Picasso museum, from 22 October 2012 to 10 February 2013

Cézanne and the past

BUDAPEST  At the museum of Fine Arts, Cézanne and the past is enhanced by many international loans to show how the art of the painter from Aix was nourished by the great masters of the past. Until 17 February 2013.

PARIS  Though not as wealthy as those in Vienna, Paris churches keep many paintings. At the musée Carnavalet, les Couleurs du ciel shows the most beautiful productions of the XVIIth century. Until 24 February 2013.

ROME  At the MAXXI, LItalia di Le Corbusier presented in partnership with the Fondation Le Corbusier of Paris, shows through an average de 600 drawings and sketches the influence of Italy on the work of the great architect. Until 17 February 2013.

Ivan Picelj, the love for circles

He died in February 2011, only a year after his dear Parisian friend Denise René, where he often held his exhibits since 1961. It is nevertheless in the same gallery, relaunched by her successors, that the exhibition of Ivan Picelj is presented as testimony of a relationship that was built over half a century, together with other great names of geometric abstraction such as Vasarely, Soto or Pol Bury. Ivan Picelj (1924-2011) was also part of the Nouvelles Tendances movement and he explored the action of light and the minute variations of composition or materials on simple geometric formations, and also oriented his research towards typography and industrial design. The works presented are shaded circles inscribed in squares that attract the eye towards increasingly different looks. The exhibition is programmed in the Cultural Croate Season, and is a good example of loyalty: Peter Knapp and Annie Le Brun, who just like Denise René followed Piceljs work for the last fifty years, took part in the catalogue.
 Ivan Picelj at the galerie Denise René, from 30 October to 24 November 2012.

Geneva looks into its past

In 1901, the room of the Conseil dEtat (State Council) in the town hall of Geneva was restored. The wood work and the tapestries were taken down and specialists discovered in awe paintings that had been hidden for two centuries. Judges with their hands cut off, surrounded by David and Salomon, and a series of major personalities, mixing heroes from Ancient times such as Aristotle and Virgil and more modern paladins such as Alain de Lille, the theologian of the XIIth century, or Gautier de Châtillon, the poet from the same period. A new restoration campaign, carrie dout in 2011, allowed specialists to study the technique, the iconography and the symbolic of these two different cycles in depth. This book retraces the whole itinerary giving the details for example of the six coats Hugues Boulard used in 1501 (plaster, yellow background, pigment, polish, white, glaze). Were these frescoes or dry paint? Was César Giglio the author of the second campaign, towards 1601, and who would have paid him ten ducats? What part did Léon Gaud, the restorer in 1901 really play? These essays bring up as many questions as they solve, which is always excellent to stimulate research
 Peindre à Genève au XVIe siècle directed by Frédéric Elsig and Nicolas Schätti, Georg editor, 2012, 172 p., 25

The fair presents around 60 artists and intends to reflect the young contemporary art scene (photo: a work by Emilien Adage)

BARCELONA -A ceramic statuette dated back to 4500 B.C., was discovered in the Catalan town of Begues. It would be the most ancient manifestation of ceramic art on the Iberian Peninsula.

The article in ABC dated 27 October

COLOGNE -The 10the edition of Art Fair 21, dedicated to young galleries of contemporary art, will be held from 1 to 4 November 2012.

GUATEMALA -The ruins of the oldest royal tomb of the Olmeca-Maya civilization have been discovered on the national archaeological site of Takalik Abaj. They are probably from between 770 and 500B.C. They were discovered last June and the news was published on 25 October.