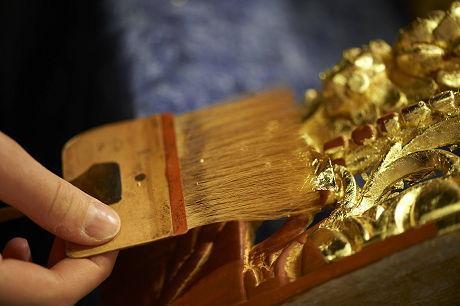 November is a dark month  but it is the month of heritage. In any case that is the idea we get from the multitude of specialized fairs in this period of the year. It is to the point of complicating schedules for amateurs as two of these events will be held at the same time. In Paris, at the Carrousel du Louvre, the Salon international du patrimoine culturel will hold its 18th edition from 8 to 11 November, with 270 participants, a cycle of conferences and a real off event to include the visit of 13 artists workshops. At the same time, Florence will be hosting its 3rd Salone dellArte e del Restauro. This biannual event also combines the presence of various stands at the Fortezza da Basso with visits in situ, to the basilica de lAnnunziata for example to see the result of the restoration of frescoes by Andrea del Sarto. The Denkmal in Leipzig, equally bi-annual, will not suffer from this type of competition. Its 10th edition, scheduled from 22 to 24 November, will focus above all on the role of wood in the architecture of old monuments with Russia as the guest country a reference in the matter even though its historic towns such as Irkoutsk and Tomsk, have seen their heritage suffer damages repeatedly.

The Salone del Restauro in Florence

The Denkmal fair in Leipzig

PARIS  A State of 160 millions inhabitants, with 250 ethnic groups and 500 languages, which we only remember because of the war of Biafra, the religious conflicts or the kidnappings of managers on the oil exploitations. Actually, Nigeria, the most populated country in Africa, has a lot more to offer as can be seen in this ambitious exhibition dedicated to the valley of the Bénoué river, an affluent of the Niger and over 1000 kilometres long. A great number of cultures have developed along its shores, with names never pronounced in the Western world - Ebira, Jukun, Chamba or Yungur  and underline our ignorance. In the midst of constant population movements caused by the pressure by the Muslim Peuls, wooden masks that we traditionally associate to Africa have been produced, as well as a wealthy patrimony of metal and ceramics: some 150 objects from American and European collections are there to prove it.
 Nigéria, arts de la vallée de la Bénoué at the musée du quai Branly, from 13 November 2012 to 27 January 2013.

These exhibitions also to be seen

A century of Cyprus

PARIS  At the Louvre, Chypre entre Byzance et lOccident describes one thousand years of the islands history by presenting icons, frescoes, silverware and other art objects. From 28 October 2012 to 28 January 2013.

PARIS  At the Bibliothèque nationale de France, lÂge dor des cartes marines is a voyage to the universe of great discoveries. Until 27 January 2013.

The architects of tomorrow

PARIS  At the Cité de lArchitecture, Albums des jeunes architectes et paysagistes 2012 (Albums of young architects and urban planners) show the most recent creations (professionals under the age of 35) in the field of architecture in France Until 9 December 2012.

REGGIO EMILIA  At Palazzo Magnani, Women in Fluxus sheds light on the role played by women in the Fluxus movement. From 10 November 2012 to 10 February 2013

Marcel Aymé, in paper and ink

PARIS  Would you like to read the original manuscript of La jument verte? It will only cost, theoretically, 70 000. You can also choose Lucienne et le boucher, La Vouivre ou La rue sans nom, hardly less expensive (respectively estimated at 35 000, 70 000 and 45 000). This exceptional group of manuscripts of Marcel Aymé (1902-1967), a prolific, precocious (he was rewarded the prix Corrard from the Société des gens de lettres for Brûlebois in 1926, at the age of 23) and independent author (he fought against the crime of opinion and all types of cleansing that occurred in cultural circles during the la Liberation) will be of interest first of all to all institutions (among them the BNF and the Bibliothèque historique of the city of Paris). But a few lots should remain for passionate individuals, such as this manuscript of the novel La retraite de Russie, from 1930 (estimated at 1800). A major object by Marguerite Duras, the definite typed script of Lamant (60 000 ) will wrap up the sale.
 Manuscrits de Marcel Aymé et Marguerite Duras at hôtel-Drouot on 14 November 2012 (Binoche et Giquello)

Bruno Perramant, to see or not to see

He is crazy about Fra Angelico, he is a figurative artist, he paints polyptychs and yet he is very contemporary  This strange enigma of contemporary art has a name, it is Bruno Perramant. Nourished on the brutality and the violence of our world, working by series (ghosts, for example), including or not texts into his paintings, the artist born in 1962 produces work that likes to ask questions: What do we look at? How do we look? What is the status of an image? 2011 was marked by a huge tetralogy named History of abstraction, exhibited in various galleries. One of the sections is adapted for the sacristy of the Collège des Bernardins and named Les aveugles: do these two large polyptychs, adapted to the dimensions of the venue, really talk to the blind? Or of our own incapacity to see?
 Bruno Perramant exhibits Les aveugles at the Collège des Bernardins, from 9 November 2012 to 20 January 2013.

As a symbol of the strength of nature, simple potatoes are transfigured by the artist

Our selection of new exhibitions in France, Switzerland, Belgium

For nearly a century and in particular following the lobbying carried out by art historian Roberto Longhibetween th two wars, Caravaggio became a sacred star of ancient art. His adventurous life, his iconoclasm (to represent religious scenes with Roman robbers), his mysterious death on a beach in Tuscany had all nourished the myth. Caravaggio is seen today as being at the head of a school and each of his retrospectives is a real succcess. The author signs a bood that is just as iconoclastic: he takes Caravaggio from his pedestal -while expressing his admiration for him - by showing that hte innovations he is admired for, such as the half figures, the scenes placed next to a religious allegory in one same painting are allshared with other artists such as Ribera. In the same manner, his so-called 'school' does not correspond to a group of students but rather to competitors such as Bartolomeo Manfredi who systemazed his choice for realisms and the chiaro-scuro. The artist was nourished with statistics by going through the major Roman collections of the XVIIth century, describing sequences of real concrete life (Borgianni, Guidotti), of passionate developments on the figure of the bohemian or the theme of the concert, and the reader goes through the book almost lke a police mystery.
 Après Caravage by Olivier Bonfait, Hazan, 2012, 224 p., 19

ABU DHABI- The 4th edition of the contemporary art fair Art Abu Dhabi will be held from 7 to 10 November 2012.

BUDAPEST- Art Market Budapest, a contemporary art fair, will hold its 2nd edition from 8 to 11 November 2012.

EAST LANSING (USA) - The Ely and Edythe Broad Art Museum, designed by Zaha Hadid in the heart of State University of Michigan to host a part of the collection of these philanthropists, will open on 10 November 2012.

MOSCOW  The new Russian Jewish Museum, dedicated to the history of the Jewish community in Russia will be inaugurated on 8 November in an ancent bus depot designed by Constantin Melnikov and readapted by the German agency Graft Architects.

NEW YORK-The Salon, a creation of the Biennale des antiquaires de Paris, will bring together some fifty antique dealers from 8 to 12 November 2012.

PARIS -The salon Paris Tableau, dedicated to the great masters, will be held from 7 to 12 November 2012 at the Palais de la Bourse.

PARIS-The fashion film festival, ASVOFF, will be held at the Centre Pompidou, from 9 to 11 November 2012.

TORINO - The contemporary art fair Artissima will hold its 18th edition from 9 to 11 November 2012 in the Oval pavilion.