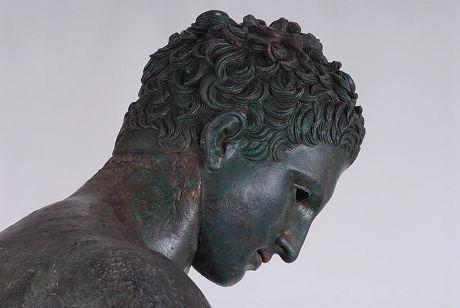 The Croatian Apoxyomenos, bronze, red-copper inlaids. H. 192 cm. Hellenistic or Roman replica after a Greek original from the 4th century BC. Croatia, Ministry of Culture © Croatian Institute for Restoration

The most beautiful bronze of the Mediterranean?

Greek and Roman antiquity were enamored with bronze statues. And yet they left very few. Most of them have disappeared or were melted down. It takes some unforeseen events  diggings in a site following an earthquake or the sinking of a ship  to unveil them. The most famous are the colossal ones from Riace, even though no one has seen them since they were discovered almost 40 years ago. Fortunately, the family of bronzes fished out of the Mediterranean is growing slowly but surely. It has recently welcomed a new member, an athlete with a complicated name, Apoxyomenos, due to his attitude. He is the "Scraper" because he acutally 'scrapes' the sweat and sand off with a strigil. In fct his disappeared a long time ago, no doubt in the depths of the sea. He was discovered in 1997 by Belgian diver René Wouters, who has since passed away. The statue was 45 metres deep along the island of Losinj, at the height of Ravenna and Zadar. Apoxyomenos was patiently restored between 1999 2007. The huge scar that marked his thigh has been absorbed and now the tall ephebe (1.92 m) has arrived at the Louvre, where he is one of the jewels of the Croate Season.
 The Apoxyomenos of Croatia is exhibited at the musée du Louvre, from 23 November 2012 to 25 February 2013.

 The bronzes of Riace, which have also been greatly restored, were to be elegantly installed in the Museo della Magna Grecia in Reggio Calabria at the end of 2012. No specific date has been givne for the inauguration that seem sto hae been pushed forward without any further explanation

Lebanon, so young and yet so old

GENEVA  It is beyond what Napoleon proclaimed at the feet of the pyramides: Lebanon looks down on us from its sixty centuries of history. The media have ignored this event, since they prefer the news that comes right off the burner from the night before  The exihibition at the Rath museum invites us to an interesting exchange of points of view by accumulating over 300 'proofs' of this impressive antiquity. Most of them come from the National Museum of Beyruth, and range from an idol in limestone from the bronze age to a coin from the iron age, Greek statues with Eucheristic bread molds, up to the elements from the Meyyade palace of Anjar and the Melkite icons. We can well imagine this is not a simple collection of ages but rather an unlimited crossing of influences and religions  Greece, the Phoenicians, Rome, Byzantium, the first Christians, Islam. We can easily not thaMiddle East, globalization is a very ancient story
 Fascination du Liban: soixante siècles dhistoire at the Rath museum, from 30 November 2012 to 31 March 2013.

PARIS  The Institut du monde arabe looks into A Thousand and One Nights, a fundamental text that entered for the first time in Western languages thanks to the translation by Antoine Galland at the beginning of the XVIIIth century. From the illuminated books to the drawings by Picasso and Diaghilev's ballet, some 350 works show the myth in detail. From 27 November 2012 to 28 April 2013

PARIS  The Louvre presents an unknown Baroque sculptor from Galicia (Poland), Johann Georg Pinsel, who lived in the middle of the XVIIIth century and was a master of polychrome wood. From 22 November 2012 to 25 February 2013.

Dietrich, a virtuoso in copying

SAINT-PETERSBURG  The Hermitage museum dedicates a retrospective to Christian Wilhelm Dietrich (1712-1774), a painter who was active in the court of August III, the Elector of Saxe, and known to have been inspired by his famous predecessors such as Rembrandt. From 28 November 2012 to 24 February 2013.

The Wolf spouses, collectors from the new world

PARIS - The pleasure with collections is the fact they bring together very personal works which never meet the same rules. This is the case with the Liuba and Ernesto Wolf collection, built up by a couple who seemed to represent the wide horizons: hei, Ernesto Wolf (1918-2003), the descendant of a family of German Jewish industrialists who had settled in Argentina in the 1930s. She, Liuba (1923-2005), a Brazilian of Bulgarian origin. It was in São Paulo tha they grouped together the books of hours, Virgins and the Child, Dan anthropomorphic spoons from the Ivory Coast as well as Matisse's Jazz album(150 000) or a Sitting Clown by Rouault. One of the most important - visually speakng - objects is the De Laudibus by Rabanus Maurus Magnentius (8000), a work from the German Renaissance dedicated to the Crucifixion, that shows that design, the art of typography and visual poetry did not just pop up recenty Collection Liuba et Ernesto Wolf chez Artcurial les 4 et 12 décembre 2012.

Eugenio Carmi, half a century of geometry

At the age of ninety and slightly more, he is the sole survivor of post-war art in Italy. Enamored with Abstraction, Eugenio Carmi (born in 1920 in Genoa) has manipulated for decades the square, the circle, the triangle, the spiral, by makng them interpenetrate one another and he continues to explore the theme of the golden number. As director of graphism at the multinational steel plant, Italsider, for the years between 1956 and 1965, he was separated from Casorat's figurative teaching to sit down to study the divine proportion theorized by Luca Pacioli at the time of Leonardo da Vinci.After contributing to the foundation of aself-managed gallery in the village of Boccadasse in Liguria, together with artists such as Achille Perilli, he was remarked at the Biennale of Venice in 1966, the year in which Lucio Fontana was rewarded the great prize for painting. A friend of David Smith, Max Bill or Vasarely, Carmi has had a true friend for more than fifty years, Umberto Eco, for whose children stories he illustrated once upon a time.
 Eugenio Carmi is shown at the galerie Orenda (54 rue de Verneuil, 75007 Paris) until 12 January 2013.

Our selection of new exhibitions in France, Belgium and Switzerland

On 16 May 1940, a week after the campaign of France was launched, Duchamp settled in Arcachon. On 20 October 1944, Arletty, accused of collaborating with the Germans, was arrested at the hotel Lancaster. Between those two dates, in occupied France and in particular in Paris, four dark but in no way empty years went by. Picasso worked in his workshop in rue des Grands-Augustins, Kees van Dongen exhibited at the gallery Charpentier, Sacha Guitry, Cocteau and Paul Morand wrote, Charles Munch directed at the Conservatory, Abel Gance, Pagnol, Raimu and Fernandel made movies. Should they have done it? Should Marie Laurencin have given illustrations to the weekly Comoedia? Should 56 million francs have been spent to produce Les Enfants du paradis ? It is not so easy as one first thinks to answer these questions. The book is organized like a diary and describes the Occupation in detail, its key-characters, its major works, on one side and the other - from Décombres by Rebatet to Corbeau by Clouzot.
 Les arts sous l'Occupation, directed by Stéphane Guégan, Beaux Arts éditions, 2012, 280 p., 39.50

ANGKOR - The 8th Angkor Photography Festival will be held from 1 to 8 December 2012.

LONDON - The Victoria & Albert Museum will open on 1 December its new galleries dedicated to furniture.

TOURCOING  The Institut du monde arabe celebrates its 25th anniversary by opening on 21 November 2012 a new space in a former textile plant.