This is our last issue for 2012. Our next newsletter will appear on January 10 2013. MERRY CHRISTMAS AND HAPPY NEW YEAR! 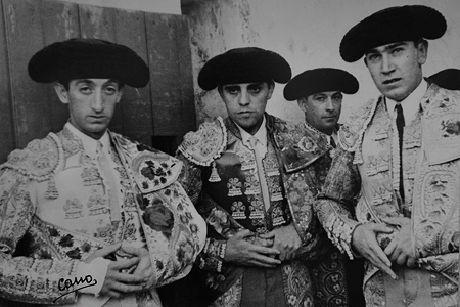 One hundred year old men versus the end of the world

Everyone has blathered about it to no end, and the media have been busy as well. The so-called end of the world is programmed for the day following the publication of this newsletter and would have the inconvenience of making the same useless  not to mention the wonderful books we wish to present for you to enjoy during the holidays. This Maya prophecy must surely have made photographer Paco Cano chuckle. To hear about the end of the world after all he has been through - from the Spanish Civil War to the cornada that killed bullfighter Manolete in Linares in 1947. The photographer, who is still present in the plazas de toros throughout Spain, celebrated his 100th birthday on 18 December, in Valencia. People talk less of him than of Niemeyer who died on 5 December, 10 days before his 105th birthday, or of movie director Manoel de Oliveira who celebrated his 104th birthday on 11 December. But he too illustrates the extraordinary longevity of certain creators. December seems more like the month of centennial men than that of the apocalypse. May this elixir of eternal youth accompany our world to come

The recent fame of the 1001 nights

Alep has sadly been on the headlines for the last few months. To talk about this Syrian city in a less sombre manner we may just remember the role it played in making the corpus of the Thousand and one Nights known to the world. Indeed, Christian Maronites from Alep were the ones to give Antoine Galland the translator-to-be, at the beginning of the XVIIIth century, the matter of what would give birth to a great classic of world literature. Ever since its first publication in 1704, its success has never waned, as can be read in this ballade through some of its numerous visual incarnations, going from the Turkish Karagoz theatre of shadows to Baksts costumes for the Ballets russes of Diaghilev, including a movie by Georges Méliès that can be currently seen at the Institut du monde arabe in Paris. While the genesis of these stories goes back to the Abbasid Caliph of Bagdad, in the IXth century, they were echoed to the world by the modern Western civilization. They fascinated Andersen as well as Borges, were carried by Dutch merchants all the way to Nagasaki, and glued adventurer Burton he who discovered the sources of the Nile - to his chair to carry out his unforgettable translation. These stories also revealed another fascinating cosmopolitan character, Joseph-Charles Mardrus (1868-1949). He was born in Cairo in an Armenian family, studied with the Jesuits in Beirut before dedicating himself to medicine in Paris. He is best known for a non-censured version of the stories
 Les Mille et Une Nuits, Hazan, 2012, 400 p., 39.

Impressionnism, a reflection of fashion

'The satin corset may be the Nude of our times' Manet said. The major exhibition at the musée d'Orsay on the relations between Impressionism and fashion shows 'fashion addicts' are not an invention of our century. Numerous specialised magazines such as Paris-Charmant or La toilette de paris and teh powerful big department stores show that fashion already generated high revenue in the last decade of the XIXth century, a period during which Parisian Haute Couture triumphed, Art could not remain unsensitive to this phenomenon. While Tissot continued in a style of meticulous realism, rendering materials in an extraordianry manner, Renoir, Degas and Berthe Morisot declared war to the classic portrait of the elegant woman standing. Their models struck more natural poses in a new environment and different light, while they reproduced a the fashion of their time. The permanent criss-cross between paintings and real objects such as dresses and shoes complement the demonstration.
 L'Impressionnisme et la Mode, Flammation/Musée d'Orsay, 2012, 320 p., 45.

Another museum in Istanbul

One of Orhan Pamuk's heroes felt 'The attachment one feels for objects is one of life's great consolations.' After buidling his novel, 'The museum of innocence' like a museum catalogue, the writer went a step further by truly creating his collection that opened to the public in April 2012 in the district of Cukurcuma. This museum of innocence hosts a very personal, haphazard collection that speaks of an Istambul that is disappearing, that of postcards with boats, tulip-shaped glasses to drink tea out of, chromos of actresses and football players, or an earring that brings long-gone lovers back to life. This cabinet of curiosities that is miles away from the universal and impersonal 'real' museums, one that can be seen like a part of one's life, like an instant photograph of the XXth century on the wane. Almost like a novel, for aren't art and objects - like literature - mirrors one takes along a wide road?
 L'innocence des objets, by Orhan Pamuk, Gallimard, 2012, 264 p., 35.

The aim of this book with exquisiste reproductions on a elegant black background is to retrace the history of jewelry since 1800. Te authors know what they are doing as they are specialsits from Sotheby's who chose to concnetrate on the pieces they saw up close, as they all went through their hands. David Bennett has a record he can boast of, the bid of $46 million for the Graff Pink diamond in 2010. The book gives preference to creations from the Belle Epoque and Lalique as its spearhead, or Art deco with a cigarette case by Raymond Templier, among other works. The book also focuses on various revivals like neo-Etruscan, neo Renaissance, etc. Italian workshops exceled in most of these periods, such as those of Castellani. Among these glisttering bracelets and necklaces designed by Cartier, Van Cleef & Arpels or Sterlé, ceratin pieces have an amazing pedigree, such as the 'Hindu' clip by René Boivin in diamond, ebony and gold, engraved with precious stones and which princess Baby de Faucigny-Lucinge wore in a Vogue magazine in 1937.
 Célébration du bijou by David Bennett and Daniela Mascetti, Bibliothèque des Arts, 2012, 324 p., 85.

Creation during the occupation

Under a kraft coloured cover that is reminiscent of the deprivation of those somber years, the book shows how, even under the oppressor's boot, artists continued to produce. Some of them, and at different degrees, bent their heads such as Vlamink and his ill-reputed trip to Germany; or the curators of the Musée d'art moderne inaugurating it in 1942 with an array of outdated attitude; Cocteau making an eology of Arno Breker, Hitler's favorite sculptor. But not all of them reacted in that manner as the book recalls in various chapters dedicated to Picasso whose request for French nationality had just been refused and who at the time painted in his workshop on rue des Grands Augustins his famous Aubade. Or Jeanne Bucher, the gallery owner who exhibited representatives of 'degerated art' like Otto Freundlich who died in a cocentration camp, and protected other artists such as photographer Rogi André who lived, in hiding in her attic. The catalogue of the exhibition at the Musée d'art modern of la Ville de Paris hs the public rediscover poorly known artists who created under very difficult and harsh conditions, such as Roger Payen, who worked at la Santé prison on a 'poor' support, match boxes. A final glossary combines characters, events and venues locations, from Jean Cassou at the Exode, after passing through the Drouin gallery.
 L'art en guerre, France 1938-1947, directed by Laurence Bertrand Dorléac and Jacqueline Munck, Musée d'art moderne de la Ville de Paris / Paris Musées, 2012, 400 p., 39.