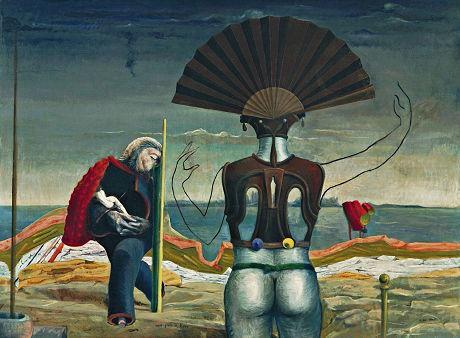 In the past, airports were used to catch a plane, or to get off one. Today, one can eat there -not very gourmet style grant you  you can shop, meditate in a chapel or sleep in one of the international hotels. Culture was never considered. But things change. The hub at Schiphol in Amsterdam was the first to offer a museum space; indeed, since 2002, the Rijksmuseum manages an annex there. Gallery owner Larry Gagosian, always eager to be a forerunner, recently asked Jean Nouvel to adapt a hangar at the Bourget that opened during the FIAC 2012. The airport of Roissy-Charles de Gaulle, often criticized for the poor quality of its services in comparison to those of Madrid or Frankfurt, decided to get ahead of all the others. It has just inaugurated in hall M of terminal 2E its Espace musées (Museum space-, an ambitious name for the 250 m2 access free area (i.e. 1% of the boarding gates), designed by Wilmottes heir and of which the curator is Serge Lemoine, the former boss of the musée dOrsay. The first guest will be the musée Rodin that has loaned some fifty works, among which the famous Penseur. It is said the sculptor declared just a century ago, in 1912 when he saw a plane, There is Vincis dream going by. Airports are becoming civilized, thats the good news. The time has come to demand auditoriums, libraries and movie theaters

The Rijksmuseum area in the airport of Schiphol

Le Corbusier and the North

STOCKHOLM  In 1932, Le Corbusier gave conferences in Stockholm. The following year he participated to a think tank on town development in the Swedish capital. In 1961, he was the object of a retrospective. And in 1962, he drew up the plans of a museum for real estate developer Theodor Ahrenberg that was never built. The relationship between Le Corbusier and Sweden could have sufficed for an exhibition but while this theme is looked into, a much wider approach was chosen. It is focused on the masters secret laboratory, the workshop where he painted and where he thought out his theories, from the purism of the 20s to the merge of the different art forms after World War II. This exhibition brings together some 200 works and opens a very rich year on Le Corbusier since it will also include a retrospective at the MoMA in New York on 9 June with the same curator, Jean-Louis Cohen and another one dedicated to brutalism of his last years, as of 11 October at the J1 in Marseille.
 Le Corbusier: The Secret Laboratory at the Moderna Museet, 19 January to 18 April 2013.

The exhibition at the MoMA

The exhibition in Marseille

6 other exhibitions that open this week

BADEN-BADEN  Before heading to the musée Cantini in Marseille in February Matta (1911-2002), the independent Surrealist, the apostle of tropical colors who had his doubts about technologic excesses, will be celebrated at the Frieder Burda museum. From 19 January to 2 June 2013.

MADRID  The Collection Phelps de Cisneros, built by a family of Venezuelan magnates in Caracas and New York, is one of the most important ones in Latin America. It includes a very important fund of geometric abstraction presented at the museo Reina Sofía. From 23 January to 16 September 2013.

NEW YORK  At the International Center of Photography, Roman Vishniac Rediscovered recalls the extraordinary work carried out by the photographer (1897-1990) who built a complete summary of life in Jewish communities in Central Europe in the period between the two wars. From 18 January to 5 May 2013.

PARIS  One of the most influential gallery owners in the field of photography, New Yorker Howard Greenberg presents his collection at the Fondation Henri Cartier-Bresson. Among the one hundred works presented, we will admire vintage prints of Dorothea Lange (photo), Berenice Abbott and Eugene Smith. From 16 January to 28 April 2013

5 The street according to Meyerowitz

PARIS  The Maison européenne de la photographie launches a new series of exhibitions. The most ambitious is a retrospective dedicated to New-Yorker Joel Meyerowitz (1938), who left his mark on street photography for nearly half a century. From 23 January to 7 April 2013.

6 Max Ernst, a giant of the XXth century

VIENNA  The list of the techniques he used is unlimited. Max Ernst used paint, drawing, decals, scratching or collage, and used them all in his work that flirted with Expressionism, Dadaism, Surrealism or fantastic realism. The Albertina dedicates a retrospective to the artist with 180 of his works. From 23 January to 5 May 2013.

Walid Raad and the aggiornamento of Islam

The recent opening of the department of arts of Islam at the Louvre shed light on a very rich patrimony. But what is lacking is a perspective on contemporary art, given that it would go against the chronological limits that define this museum. Walid Raad, born in 1967 in Lebanon and settled in New York, remedies to this through an installation set up in the salle de la Maquette and a selection of images taken from the Louvres photographic fund. The use of a synthesis of texts, videos, a game of change of scales and hybridizations leads to the central issue, something of a curse. We see that wars, religious conflicts and endemic violence prevent Islam in the XXIth century from taking ownership of its artistic and cultural heritage. This order is part of a long-term project since it foresees three phases over three years, thus confirming the recent interest the Louvre has in contemporary creation.
 Walid Raad, préface à la première édition at the musée du Louvre, from 19 January to 8 April 2013.

From Portuguese origin, grown up in Luxembourg, active over Europe, Mario Godinho (1978) feeds his art on geography, travel and cultural uprooting

Intellectuals in the land of the Soviets

A catalogue that is well built enjoys a life after the exhibition. That is the case for this one that accompanied during a discreet 2012 Franco-Prussian year the event Intelligentsia, recently closed at the Beaux-arts in Paris. It examines closely a century of relations between French and Russian intellectuals, and presented a rich ensemble of original documents  photographs, films, manifestoes, letters and oukazes. From the hand written report of the conversation in 1935 between Staline and the greatest writer in the world (Romain Rolland) to the declaration of a furious André Breton on the day following the process of Moscow in September 1936, we can see that objective positions vis-à-vis of the Soviet Union were not customary. One was either for (Aragon, Sartre, Pierre Daix for a certain period), with all the compromises that could entail, or one was against (father Chaleil, David Rousset, Camus, Gide after his trip) with all the related dangers. This large volume brings together Picasso and his famous Colombe, Troyat and Kessel (asking for their French naturalization), Barbusse who died in Moscow in 1935 and Malraux, and is a reference with particularly touching documents. Such is the case of these instructions written in purple ink, in perfect French and a tiny hand writing, with which Pasternak covered post cards sent to Jacqueline de Proyart, the young Slavist who sneaked his manuscript out to the West.
 Intelligentsia, directed by Véronique Jobert and Lorraine de Meaux, Beaux-arts de Paris les Editions/Institut français, 536 p., 49.

AMSTERDAM  The Realism fair, dedicated to figurative painting, will be held from 17 to 20 January 2013 at the Passenger Terminal.

MALAGA -The capital of Andalucia will inaugurate on 18 January 2013 a new cultural infrastructure, La Térmica. Over nearly 15 000 m2, it will host workshops and artistic events. La première exposition is dedicated to Lady Warhol, a series of photographs by Christopher Makos.

MIAMI -The 4th contemporary art fair Miami International Fair will be held at Seafair from 18 to 21 January 2013.