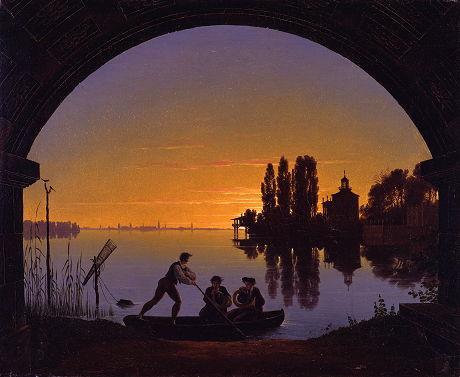 Where did I put my head?

The recent buzz regarding Courbet reminds us of a good old ad in the 80s. The claim of the discovery of the head that belongs to the artists lOrigine du monde, published on the cover of the magazine Paris Match - which has not always showed such interest in the art world  reminds Parisians of an advertising campaign that had everyone holding their breath. From one day to the next a beautiful young woman, presented in 4x3 mts. billboards, uncovered herself. Her promise Tomorrow I will take off the bottom was held as well as Courbets red headed model, for indeed the posters showed her completely naked, but seen from behind. Do we always need a top and a bottom? The research for the missing link is a noble and often long lasting activity. This brings to mind the desperate search for a fragment of the Adoration of the mystic lamb by the Van Eyck brothers in Ghent, already mentioned in this newsletter or Carpaccios Two Courtesans at the museo Correr in Venice who became two dignified ladies once their husbands were found a few years ago while duck hunting at the Getty Museum. In the case of Courbet, as for the pretended drawings by Caravaggio found in Milano a year ago, the foreseen impact in the media caused a great commotion. These so-called revelations should be looked at with a cool head

The article in Libération

A wind of folly

PARIS  RAVENNA  For a long time art made by the mentally disturbed, or the simple minded was considered non-receivable. I took time for the way of looking at things to change, stimulated by pioneers such as the psychiatrist Hans Prinzhorn or artist Jean Dubuffet for alternative productions to be taken into consideration. In Ravenna, the exhibition Borderline pulls the threads of this current and goes much further back , from its roots with Bosch to more recent productions such as those of Wols, Aloïse Corbaz or Ligabue. At the same time, Sous influence at the Maison rouge, studies psychotropic substances as unequaled creative instruments. They bring together 250 works among which those by Michaux and Artaud and show the artists as they become the writers of an altered reality. The FDA is watching you
 Borderline, artisti tra normalità e follia at the Museo della città, in Ravenna, from 17 February to 16 June 2013.
 Sous influences at the Maison rouge, from 15 February to 19 May 2013.

The exhibition in Ravena

The exhibition in Paris

The sources of neo-classicism

FRANKFURT  Beauty and Revolution at the Städel Museum shows how neo-classicism paved the way for Romanticism, by showing some one hundred works of art, from Mengs to Canova, from David to Ingres. From 20 February to 26 May 2013.

When Picasso was twenty years old

LONDON  The century was one year old and Picasso was undoubtedly going to be a major actor in it. That is what is shown in Becoming Picasso: Paris 1901 at the Courtauld Gallery around the emblematic Enterrement de Casagemas. From 14 February to 26 May 2013.

Duchamp stripped naked by his disciples

LONDON  How did Marcel Duchamp influence the American avant-gardes? The Bride and the Bachelors studies three emulators, around the famous Nu descendant lescalier in a rich music and dance program (photo: Strings 1-20, 1980 ©John Cage Trust). From 14 February to 9 June 2013.

Matta on the Vieux-Port

MARSEILLE  During the year of Marseille as European cultural capital, the musée Cantini will re-open to the public and will present a retrospective by Chilean painter Matta (1911-2002). From 15 February to19 May 2013.

Gutai, the pioneers of performances

NEW YORK  The Japanese Gutai movement, that expressed itself through movement and performance, was a fundamental avant-garde in the 1950s and 1960s. The MoMA groups together some 120 works to show it. From 15 February to 8 May 2013.

Breuer, the spirit of Bauhaus

PARIS  He designed a chair starting with the handle bar of a bicycle, but he also designed the Whitney Museum in New York: the Cité de larchitecture gives us a complete tour of the genius of Marcel Breuer 1902-1981). From 20 February to 17 July 2013.

PARIS  The Mona Bismarck Foundation shows a typically American tradition, based on patchwork and the use of geometric motifs. It presents a few remarkable examples in Quilt. From 13 February to19 May 2013.

PARIS  Though she had been nearly forgotten for 40 years, her dragon armchairs created a sensation in 2011 at the Bergé-Yves Saint Laurent auction and were sold for more than 10 million. The Centre Pompidou dedicates a detailed retrospective to designer Eileen Gray (1878-1976). From 20 February to 20 May 2013.

Ziem, an apostle of color

Jean-Hubert Martin, looking for the outsider

He became famous with the exhibition Les magiciens de la Terre in 1989 at the Centre Pompidou and at the Grande Halle de la Villette in which he questioned the concepts of centre and the periphery and shed light on certain tribal artists next to stars of contemporary art. Jean-Hubert Martin likes to bring down barriers and in the context of his very fulfilling career as a museum curator he also directed the Kunst Palast in Düsseldorf and was the curator for the current Dali exhibition at the Centre Pompidou. He proves this in his writings of which the interest varies, but that cover a quarter of a century. His travel journals from the end of the 1980s show the energy spent and the numerable preparatory encounters, and shed an interesting light on the genesis of the Magiciens de la Terre. His thoughts on art and religion are less convincing than those dedicated to the cabinet de curiosités, which has been the object of a rekindled interest the author is somewhat responsible for. He indeed was a pioneer of those mixes between the present and Antiquity, between art and the scientific disciplines when he directed the château dOiron. We only regret there is no biography, not even a short one, that would allow us to connect some texts that are often very personal to a period of his life.
Lart au large, by Jean-Hubert Martin, Flammarion, 2012, 384 p., 29

A recent series of large paintings between abstract and figurative art

LENS -La Liberté guidant le peuple by Delacroix, one of the masterpieces shown at the new Louvre-Lens, was vandalized on 8 Febuary 2013 by a female visitor who wrote "AE911" with a black felt pen. The restorers were able to erase the writing.

PARIS - Chiara Parisi, the director of the Cultural programs at the Monnaie de Paris, and Julie Pellegrin, director of la Ferme du Buisson, have been named artistic directors for the next Nuit blanche on Saturday 5 October 2013.

PARIS - The Nouveau Festival at the Centre Pompidou will offer from 20 February to 11 March 2013 some one hundred events on the theme of imaginary languages.

PARIS - The Déprez-Bellorget gallery, located at 15, rue de Seine, will definitely close on 23 February 2013. It is organizing a sale of drawings, prints and furniture from 14 to 16 February.

ROME - The Biblioteca Hertziana that belongs to the Institut Max-Planck and is dedicated to the study of the Renaissance, inaugurated on 1 February its new building, designed by architect Juan Navarro Baldeweg.

STOCKOLM - The 8th edition of the Market fair, dedicated to contemporary art in the Nordic countries, will be held from 15 to 17 February 2013.