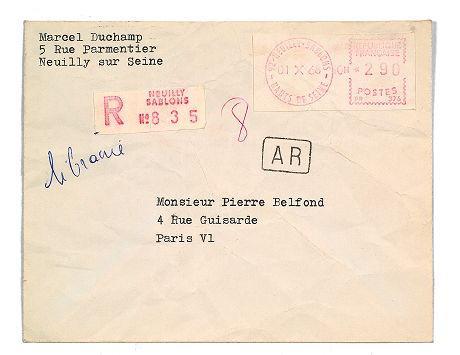 The last letter of Marcel Duchamp

Concerning the creator of the ready-made, this one tops them all  The auction house is going to reveal a rather curious object, impossible to estimate and which could attract the museum of Philadelphia, the Getty Institute, the Musée des Lettres et Manuscrits in Paris, or a wealthy oligarch from an emerging country. It is the last note sent by Marcel Duchamp. It is addressed to an editor, Pierre Belfond, and has no double meaning. It simply asks him to pay Duchamp his last authors rights as soon as possible for a series called Entretiens done jointly with critic Pierre Cabanne. It is dated 29 September 1968, and was actually mailed -with an acknowledgement of receipt - on 1st October. That same evening there was a lot of drinking at the home of Marcel and Teeny Duchamp, at 5 rue Parmentier in Neuilly, where Robert Lebel and Man Ray were also present. Duchamp turned out being faster than the mail service, and when Belfond received the letter on 3 October during his breakfast, the artist had already passed away, the previous evening, at one in the morning. It was Duchamps last happening, a dead letter
 Duchamps last letter is part of the sale Autour des Cahiers du regard, collection Pierre et Franca Belfond, on 26 Mars 2013 at Artcurial, which includes works by Man Ray, Wols, Masson, Picabia, Kandinsky, Vasarely, etc.

MADRID  This is surely not the first Klee retrospective but it is undoubtedly the most important ever mounted in Spain. While it brings together nearly 140 works created over four decades (1899-1940), it is mostly distinguished by the attention given to the artists writings. This corpus, with a total of 4000 manuscripts, follows the artists whole itinerary from the herbarium to the tables of color, including the diagrams and other pathologies. A place of honor is given to the notes for the courses given at the Bauhaus in Weimar and Dessau in the twenties. German speakers may now consult all of this work as it was been put on-line by the Zentrum Paul Klee of Berne in August 2012.
 Paul Klee : maestro de la Bauhaus at the Fundación March, from 22 March to 30 June 2013

Boudin, the king of skies

PARIS  He was a forerunner of Impressionism but once too often he has been limited to scenes of crinolines on the beach. The musée Jacquemart-André dedicates a retrospective to Eugène Boudin. From 22 March to 22 July 2013.

REGGIO EMILIA  Paul Delvaux, who represents a Belgian style, Surrealist-type painting is the object of a major presentation of works at the Fondazione Magnani Rocca. From 23 March to 30 June 2013.

TOULON  The aim of the exhibition Mappamundi at the Hôtel des arts is to discover how artists integrate the topographic and cartographic dimension in their work (photo: David Reimondo). From 16 March to 12 May 2013.

Roberto Platé, the world is a stage

He was part of the merry team of the Tse troupe, all those iconoclastic Argentines who took over Paris in the 1970s, such as Copi, Arias, Facundo Bo, forced to exile by the military regime in their country. Roberto Platé, born in 1940, accompanied them as a theater decorator before widening his world to other authors - from Chekhov to Marguerite Duras and to the opera for productions of Mozart or Wagner at the Monnaie in Brussels or the Scala in Milano. The retrospective dedicated to this polymorphic creator shows the extent of his interests, the mixing and interbreeding between genres  drawing, sculpture, trompe-lil, installations. Aside from the room of Reflet, one of the strong points of this itinerary is the reconstitution of his happening Los Baños at the Instituto Di Tella in Buenos Aires in January 1968. Visitors were invited in these real-false public toilets, to carry out their obscene graffiti which actually became calls against the dictatorship. The exhibition caused a scandal, a reaction from the authorities and the symbolic beginning of the resistance.
 Roberto Platé, tableau de scène at the Maison de lAmérique latine, from 20 March to 24 July 2013.

PARIS  Sales of pre-Colombian art give auctioneers the jitters since the countries of origin are often ready to pull out summary judgements to bring back home works they feel have been the object of illicit trafficking. This is the threat that hovers over the rather remarkable sale of the Barbier-Mueller collection, estimated at more than 20 millions. 5 million of this amount is accumulated by two stars, the Great Kallipygos Venus of the Chupicuaro culture and the Duck ready for flight of the Tarasco culture. The city of Barcelona could kick itself for not having kept this fund that they exhibited until now. The income from the sale should allow the Barbier-Mueller museum from Geneva to concentrate on its strong point, the art of Africa and the Pacific.
 Collection Barbier-Mueller dart précolombien at Sothebys on 22 and 23 March 2013.

Artists in 1914, the art of camouflage

You all painters back home? Well then, go and color us up! There is a possibility this type of barracks joke was used to enroll sargent Dunoyer de Segonzac, Paul Landowski, André Lhote, Paul Laurens, Joé Hamman... and so many other pastel and Orientalist artists, engravers or decorators transferred to the camouflage section. In 1914, France dressed up its soldiers for the war in bright red pants  while the Germans were hidden in feldgrau and the British Tommies in mignonette green. Our pros of color and trompe-loeil were so shocked by the slaughter that they offered their services to copy the middle, break the lines, decompose the tones... Cécile Coutin, head curator at the BNF and a great specialist of contemporary history, shows us how they set up false trees under the shells, they painted up the jalopies, or disguised the canons in the rear workshops. These artists went all the way out, often with a good sense of humor, always with genius, to protect the soldiers at the front from the view, the binoculars and consequently from ammunition. They dared do the most baroque creations, such as the poilus in paper mâché, boastful in their trenches that were empty. They even tried to hide the Grand Canal, and to create a cardboard Paris at Conflans-Sainte-Honorine to the north west of the city- to divert the bomb of the zeppelins! These artists were forerunners and invented the snow suits of the mountain soldiers and the leopard one of todays paratroopers. But most important, these drafted action painters or Cubist saved thousands of lives with the tip of their spatula or their paintbrush. In a book illustrated with 300 documents nseen before, a trip into an invisible page of the war... and of art.
 Tromper l'ennemi - L'invention du camouflage en 1914-1918, by Cécile Coutin, preface by Jean-Charles de Castelbajac, Pierre de Taillac publisher, 2012, 240 p., 35.

BAYEUX  The musée Baron Gérard dart et dhistoire will reopen on 23 March 2013 after 10 years of being closed and 4 years of works.

MARSEILLE  The new building of the Fonds régional dart contemporain Provence Alpes Côte dAzur, designed by Kengo Kuma, will be inaugurated on 23 March 2013 with the exhibitions "La Fabrique des possibles" (The manufacture of possibles) and "Esthétique du livre dartiste" (Aesthetics of the artist's book).

PARIS  Le Pavillon des Arts et du Design, a fair specialised in the XXth century, will be held at the Jardin des Tuileries from 27 March to 1 April 2013.