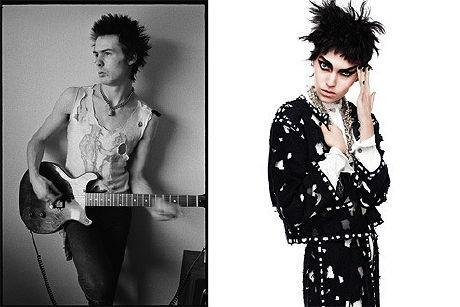 The punks walk into the Met

NEW YORK  Where does art begin and where does it end? The question is rather banal and has been asked one hundred times. In the permanent redefinition of borders, the major museums play a major role. Unforgettable exhibitions on movies, on cartoon strips and on design have contributed to give these genres a place of their own. Retrospectives on literature and fashion have contributed to healthy hybridizations. In this field the Metropolitan Museum of Art is quite daring. Just a few days after announcing the mega-donation by Ronald Lauder -a Cubist collection estimated at one billion dollars - it inaugurates a daring exhibition on the punk movement and its influence on fashion. We can see photos of Sid Vicious, the ephemeral standard bearer of the group Sex Pistols, of Patti Smith or even the Ramones. But it also presents all that which this movement classified as No Future inspired to creators such as Jean-Paul Gaultier, Vivienne Westwood or, closer to home, Viktor & Rolf or Miuccia Prada. Art deco had waited half a century before being rediscovered, art punk only waited for half that time. It is a fact, history is picking up speed
 Punk : Chaos to Culture at the Metropolitan Museum of Art, from 9 May to 14 August 2013

LONDON -In the past little boys also wore dresses and the dictatorship of fashion is not something new. These facts are particularly well shown in this selection of royal collections and show the splendors of the courts of the Tudor and Stuart dynasties. A real accumulation of blue blood, it shows Ann of Denmark, the great Elizabeth, Charles II and even Marie of Modena as well as portraits of enriched bourgeois, such as this little boy cramped in his dress and holding a coral rattle to soothe his teeth. The painters scrupulously reproduced the sumptuous materials  lace, taffetas, ruffles, braids and gold materials. The sovereigns were not always grateful though. We learn for example that Charles I was faché contre le painter Vandec' (cross with the painter Vandec) i.e. Van Dyck, for having represented his son in a skirt and not in pants as he should have done, as he had gone by the fateful age of five Holbein, Steen, Hoskins, Rembrandt and Pourbus are some of the great names who at that time played the part of history reporters.
 In Fine Style: the Art of Tudor and Stuart Fashion at the Queens Gallery, from 10 May to 6 October 2013.

BRUGES  Fabienne Verdier, hommage aux maîtres flamands, at the Groeningemuseum shows the fascination the artist -known mainly for her links with the Far-East - had for Van Eyck or Memling. From 4 May to 25 August 2013.

MILANO - Cesare Zavattini (1902-1989) was a great Italian screenwriter but a colletor and painter as well. But he was interested in one single format, the 8 x 10 cm, of which he had a collection of 1500 works. In this series, the Pinacoteca di Brera shows a series of 152 self-portraits it was able to buy last year.From 7 May to 8 September 2013.

The motif of the moucharabieh is an obsession for her and she works on it in various forms: sculpture, photography and drawing. That is because she was bon in Egypt and spent her childhood there but after that she has submitted the geometric canvas of that grid through a completely international grid. Susan Hefuna, born in 1962, did indeed grow up and study in Germany, lived in New York, exhibited her work in Sidney, Doha or Vancouver. The lines and dots she draws can host letters and numbers, transform when she works in three dimensions  into display windows, boxes or even partitions that resemble perfectly pixeled screens. When she draws she is guided by one principle in the creation of this rigid structure and, strangely enough, it is the greatest spontaneity. She was awarded the drawing prize of the Fondation Guerlain in 2013.

Susan Hefuna will exhibit at Rose Issa Projects in London in July 2013.

Sketches along the way

It is no longer typical in our time to stroll without being pushed by time, to wander to the rhythm of encounters and fate. Yet it is the attitude Michel Longuet has adopted in his quest to follow the footsteps of sacred characters such as Méliès, Beckett or Calder. Equipped with his erudition, his notebook and his pen, he looks for number 13, rue Laffitte, where Gauguin worked, the gate to the workshop of Toulouse-Lautrec on rue Frochot, or Jean Follains bombed house in Saint-Lô. The result is a book illustrated like an aesthetic tracking, combining drawings, notes and comments collected according to a search for what is unusual and wonderful. To follow Méliès for example, the author goes close to a candy plant in Montreuil while the Albert Marquet path put him into contact with the owners of the apartments where the painter lived, and he discovered in doing so that each one of them was systematically on the fifth floor.
 Adresses fantômes, by Michel Longuet, Grasset, 2013, 112 p., 18.50.

A collective creation under the direction of Thierry Fournier: how the landscape seen through the camera can become a contemporary artwork