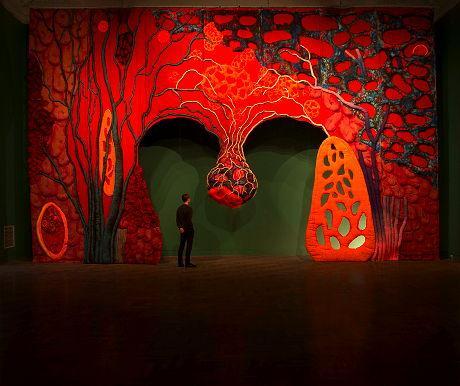 All is well, we are in a crisis.

The theory is proven right every time: art has never sold so well as in a time of crisis. We are talking here of "major" pieces - since the secondary works, the "little masters" are the real victims of the recession. On 15 May Christies sold for nearly 500 million in one single auction. On 5 June, Bonhams broke the record for a Russian painting by selling Madonna Laboris, a work by Nicolas Roerich, at £7.9 million. Another example that tells it all: Art Basel, the most important art fair of modern and contemporary art, has never done so well. Like all the previous years, it will host over 300 finely selected galleries, and transactions for various millions of Euros will be the run of the mill. Its success is measured with another indicator: it is about to become a true "global brand". Following the succes of its offspring in the United States (Art Basel Miami Beach, since 2002), its new frontier is now in Asia with Art Basel Hong Kong, launched last May. Globalization is criticized by some but it helps those who know how to ride the wave
 Art Basel wil be held at Basel, from 13 to 16 June 2013.

AIX-EN-PROVENCE  This is one of the key events of Marseille cultural capital, acting more like a territory since it is organized in two parts. The first is at the musée des Beaux Arts in Marseille, at the palais Longchamp that reopened for this event-, the second is delocalized to Aix, at the musée Granet. How did the color and light of the South increasingly bewitch the artists? With Signacs and Van Goghs discovery trips in the 1880s, the painters brush away the assumption according to which one stays in the South only during the cold season. They also spend the Summer there, nourished by the sun, and at as pilot-fish for the tourists who would not follow them before the 1920s, thanks to the American pioneers described by Scott Fitzgerald in Tender is the night. Of course Cézanne is an important link in this awakening; but Monet, Braque, Matisse, Picasso and Modigliani did not stay behind. This is easily proven by the nearly 200 paintings exposed, on loan from many institutions.
 Le grand atelier du Midi, from 13 June to 13 October 2013 at the musée Granet (Aix-en-Provence) and the palais Longchamp (Marseille)

 Also in Marseille : Château Borely, the museum dedicated to ceramics and decorative arts, will reopen to the public on 14 June 2013.

BADEN-BADEN  With Emil Nolde, the splendor of colors, the Frieder Burda offers a retrospective of the German painters' whole career, including in particular landscapes and portraits, as well as a few watercolors of those "non-painted paintings" done when the Nazis forbid him from painting. From 15 June to 13 October 2013.

The mirage of the Normandie

EVIAN  How did people live on the luxury cruisers at the time of the Belle Epoque? The exhibition Légendes des mers at the Palais Lumière plunges us into the golden age of the Normandie and the Ile-de-France, with their Lalique and Dufy decoration, and their Daum and Christofle plates and flatware. From 15 June to 22 September 2013.

NEW YORK  The publication of the architect's Journal - see our newsletter from last week - has revealed a whole part of the architect's intimate life. Le Corbusier is now the object of a complete retrospective at the MoMA that explores his relationship to landscapes. From 15 June to 23 September 2013.

The pedigree of the candelabra

PARIS  They had not left their collection in over 18 years. And this is not just any collection but that of the Seligmann, among the greatest dynasties of art dealers next to those of the Wildenstein and the Bernheim Jeune. The objects concerned will surely not interest the public at large given their price (estimate: 1.5 million) and the fact they are no longer of use today. But their history of course is fascinating. They are emblematic of a Parisian know-how, these four candelabras with golden bronze mermaids, with five candles. They have already been auctioned before, in 1882, during the unforgettable sale of the collections of Hamilton Palace, that lasted 4 weeks in London, with 2213 lots, and which were attended by the Agnew, Colnaghi and other Wertheimer. At the time they were bought by a certain Edwards, who got rid of them ten years later when the Seligmann took hold of them and did not let them go for a century. The last antique dealer in the family, François-Gérard, died in 1999. So the time had come to put them back on the market
 Tableaux anciens et mobilier dart on 19 June 2013 at hôtel Drouot (Piasa SVV)

The birth of Spirou

He is one of the best-known heroes of the Franco-Belgian comic strips. That is the country that also gave the world the Smurfs, Lucky Luke and Astérix. But, while Tintins birth was greatly documented, no one knows much about Spirous. There is a simple reason for that: while Tintin only depended on Hergé, a true Commander, Spirou on the other hand had various fathers, going from one designer to another for nearly 75 years. This major volume, to be followed by many others, focuses on these first years, when a Belgian editor with a Catholic sensitivity, Jean Dupuis, decided to create a hero who was brave, curious and full of drive. This was in 1938 and the world conflict had a strong impact on the evolution of the young groom designed by cartoonist Rob-Vel. He would change from one cartoon designer to another over a very short period of time, among them a talented painter who died prematurely (Luc Lafnet), then a brilliant jack-of-all-trades (Jijé) before ending up in the hands of André Franquin, a true genius, who gave him all of his aura. The book unreels the role of each one of them, documenting all of the editors work during the war, he who chose to interrupt the publication rather thansubmit to the German censorship. It also talks of the merry improvisation these pioneers of comic trips gave out every day, as they were expected to hand out a sheet of drawings every week to give shape to this true tradition of the ninth art.
 La véritable histoire de Spirou, 1939-1946 by Christelle and Bertrand Pissavy-Yvernault, éditions Dupuis, 2013,

An important figure of outsider art (born in 1927), specialized in assemblages-reliefs