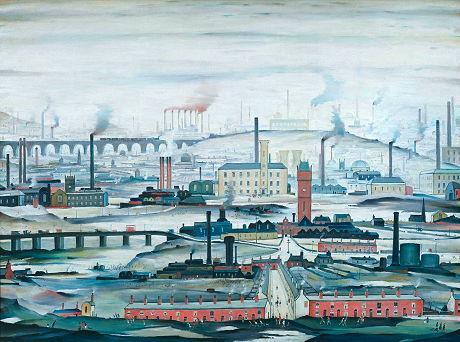 LONDON - In the Lowry family we know Malcolm, the author of Under the volcano, or Glen the director of the MoMA these last twenty years. Now we have a new member who is making a name for himself. Laurence Stephen, known as L.S. He is not really unknown. The English think very highly of their compatriot. But he is not what you would call a household name abroad. Yet this painter lived a very full life -1887-1976. More than any other he was capable of capturing the atmosphere of an industrial society on the wane, the poetry of the workes' quarters, the texture of the large brick plants, the silent crowds in the railway stations. But he also depicted the tragedies of the mine and the illnesses that destroyed populations without any resources at the very beginning of generalized social welfare. He had an independent mind and was allergic to official recognition. More than once he refused the honor of the Order of the British Empire. Lowry is the worthy heir of the Impressionists and the Symbolists. As we near the 50th anniversary of his death the Tate Britain pays a tribute to him as a major figure of the XXth century.
 Lowry and the Painting of Modern Lifeat the Tate Britain, from 26 June to 20 October 2013.

Ratton, the call from beyond

PARIS  Like many others in his time, he was at the crossroads of various currents, had a passion for Medieval Art, was active in the Surrealist movement but above all was the great discoverer of what is called the primitive arts. A well-known gallery owner, a friend of Tzara, of Man Ray, of Matisse Jr, Charles Ratton (1897-1986) had remarkable works go through his hands, before being added to the collections of the greatest museums in the world. An emblematic example is the statuette of Queen Bangwa, from the collection of Helena Rubinstein, the queen of cosmetics, and which was the first African work of art to compete -by its price- with traditional art during a sale in New York in 1966. It was present by the intermediary of a photograph by Man Ray. Some 200 works trace the itinerary of the art dealer who furthered widened his centers of interest after the war by knitting a close relationship with Dubuffet and art brut.
 Charles Ratton, linvention des arts primitifs, from 25 June to 22 September 2013.

LONDON - Vermeer and music? The link is obvious even if the Dutch painter only left a handful of paintings. The National Gallery pushes the demonstration by focusing on five of his works and a selection of other paintings from his time. From 26 June to 8 September 2013.

MARTIGNY - A meteor in modern art, the typical example of the cursed artist. Modigliani is the star this Summer at the Gianadda foundation which emptied the funds of the Centre Pompidou for this event and added some loans from private collections. From 21 June to 24 November 2013.

In praise of all that is small

PARIS  Where can we place, in our homes cluttered with objects, clothes and books, emblems of our materialistic civilization, new works of art? Maybe if we look towards miniatures, a sector very much in fashion at a time but which has greatly been abandoned. Portraits of princesses, tabacco boxes, engraved boxes, travel forks, robots, lorgnettes, ink pots, cases of all sorts, for needles, for toothpicks: all thes eobjects were greatly sought in France at the end of the Ancien Régime and the beginning of the Empire with a few rebirths as with the beautiful cigrette boxes from the 1920s  Sothebys offers a selection of these refined objects, focused on the XIXth century. The resurrection of the candy box and compact could be coming next?
 Orfèvrerie européenne et objets de vitrine At Sothebys on 26 June 2013

In public museums, the principle of the inalienability of works of art hardly leaves any space for discussion. It is not the case for private establishments as the unexpected gesture of the Aboriginal Art Museum of Utrecht, in the Netherands, reminds us. The museum has put a part of its collection up for sale with the avowed aim of having means for new purchases and, above all, to spread the works of contemporay aboriginal artists. The estimates start at 200. This should be an opportunity to get to better know its representatives, some of which have already died such as Tjungurrayi Yala Yala Gibbs or Kngwarreye Emily Kame, to whom a museum was dedicated in 2013 near Melbourne. Others are still fully active, such as Djukulul Dorothy or Kngwarreye Lion Michel. Times have changed very quickly for this ritual art. Past creations were linked to initiatory ceremonies, to evoke the travels of the ancestors, and were carried out on specific supports such as the bark of the eucalyptus tree. These pantings have undergone a complete change in their form and their use, fed by the interest of European collectors. Now the artists often use linolium, paper and acrylic paint, and women -who were not allowed to paint before the sixties -, are quite present
 Vente d'art aborigène at Richelieu-Drouot chez Castor-Hara on 22 June 2013 (lots 118 to 199). Public exhibition on 21 June from 11 a.m. to 6 p.m.

In the framework of the Nouvelles Vagues festival initiated by the Palais de Tokyo, the first Parisian exhibition of a US street artist

Another case of a homonym that could have caused trouble to its bearer, Tony Garnier. Born in 1869, died in 1948, he certainly suffered from the comparison with Charles Garnier, the designer of the Opéra de Paris, even if their styles are totally opposite. The author traces the life of the architect from Lyons, born in a family from the textile bourgeoisie of Croix-Rousse, and examines each of his major works: the stadium of Gerland, the slaughter houses of la Mouche, Garnier's iconic masterpiece together with the Grande Halle, the hospital Edouard-Herriot, the Cité des Etats-Unis. All of these works are in Lyons, except for his last, belated creation, when he was past the age of 60 and WW II interrupted that last enthusiasm: the townhall at Boulogne-Billancourt. The key question remains: why was an author considered very young in life as a visionnary -when he published his work La cité industrielle (1904), the demonstration of the vital function of townplaning - why was his influence so reduced compared to that of his almost contemporary Le Corbusier?
 Tony Garnier, by Pierre Gras, Editions du Patrimoine, 2013, 192 p., 22 .

GAND- The Herbert Foundation, a collection of contemporary works created between the key dates of 1968 and 1989, will open on 20 June 2013.

LONDON - The Masterpiece fair, dedicated to ancient painting, will hold its 4th edition from 27 June to 3 July 2013.

VENDOME - The annual festival of Promenades Photographiques will be held this year from 21 June to 15 September.