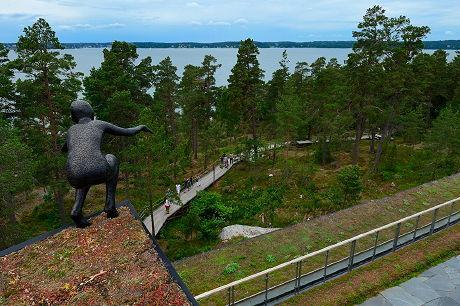 A view of the Artipelag Art Centre in Stockholm (sculpture by Maria Miesenberger). Photo: Bertrand Rieger.

Summer nights continue to be the best ambassadors for the Baltic capitals. Indeed, in June, night never seems to fall  Stockholm is no exception- except with one little difference in regard to Saint-Petersburg or Tallinn: it has been a long time since a cruise or the visit of a royal palace were the only reasons for visiting. In ten years the Swedish capital has acquired an impressive collection of contemporary art. First Rafael Moneo renovated the Moderna Museet where Niki de Saint Phalle held a famous exhibition in 1966. Since then we have seen the birth of Fotografiska, set up in 2010 in the former Customs building. It is one of the most beautiful museums dedicated to photography in Europe. Then we have the Sven-Harrys Konstmuseum with its façade covered with large gold stripes. The latest site is the Artipelag is undoubtedly the most impressive: an art center set on an island of the archipelago hence its name. It was the will of Björn Jakobson, a self-made-man who made his fortune by inventing the baby carrier, the kangourou, back in the sixties. The structure of the building designed by architect Johan Nyrén is totally interwoven with Nature and obliterates its unusual size (3000 m2 of exhibition space with 12 metres height from the ceiling). A true biological art center, that joins its insular cousins of Vassivière or Naoshima in Japan

The colors of philosophy

Philosophers who paint, painters who philosophyWeve seen that before. But the game between painters and philosophers goes beyond this simple game of ping-pong. How cab philosophy be disturbed by the simple idea of representation? How can painting embody a concept? Can we paint Hegels thoughts? These and other similar questions are intricate, be it recondite. Bernard Henri Lévy wishes to give his personal answers, for his strongest desire is no doubt to create debates around them. Indeed, the former young philosopher is the curator of the great exhibition this summer at the Fondation Maeght. From Bronzino as Kosuth, to Picabia as Basquiat, or Abramovic as Cattelan, as seen through short movies done by BHL himself, it is a disconcerting and debatable itinerary that awaits us. At least our summer will not be limited to fun and sun
 Les aventures de la vérité at the Fondation Maeght, from 29 June to 6 October 2013.

Lichtenstein, is not who we think he is

PARIS  We saw it in London, but now the exhibition has finally reached France. The retrospective on Roy Lichtenstein (1923-1997) will undoubtedly be one of the Summers blockbusters, given the artists reputation, he who was the first to merge painting and comic strips, to transcend the framework of contemporary art. The exhibition, with some one hundred paintings, intends to break that image, if only partially. Lichtenstein was the most famous pop artist next to Warhol, was a wise manipulator of the codes of consumer society, and not simply a machine to enlarge comic strips. He was more than that. He experimented with various materials and techniques, in particular with sculpture, he produced a series inspired by Matisse (the Artists Studios from 1973-74), turned towards nudes in the 1990s and delved on landscapes close to those of the Song in China when he died
 Roy Lichtenstein at the Centre Pompidou, from 3 July to 4 November 2013.

Frida Kahlo and her friends

BIARRITZ - Lart mexicain 1920-1960, léloge du corps (the tribute to the body): a lovely presentation of creativity presented at the Bellevue as the major exhibition of the Summer, with among others- Frida Kahlo, Diego Rivera, Manuel Alvarez-Bravo. From 30 June to 6 October 2013.

Plants from the XVIIth century

VERSAILLES  The vellum of botanical illustrations from the Museum dhistoire naturelle are rarely shown. During the year dedicated to Le Nôtre, they are presented at the Grand Trianon. From 2 July to 29 September 2013.

VOGUË  Produced by the musée du quai Branly and presented at the château de Voguë, Chasses magiques plunges us into the daily life of man in the Paleolithic and Neolithic periods, those who gave us the decorative cycles at the Chauvet caves, of which a copy is going to open by the end of 2014.

ARLES  Even though there are many nuances of black and grey, the Rencontres internationales de la photographie have made a daring choice this year, with all the exhibitions celebrating two-color works So, the 44th edition will all be in black and white and reminds us that color is actually quite recent. Up to the beginning of the 1980s it was regarded as intrinsically vulgar. Hiroshi Sugimoto, known for his highly conceptual sea horizons, Sergio Larraín, the magician of a vertical Valparaiso, or Gilbert Garcin, a Surrealist grand-daddy and one of the major re-discoveries of these last years, are some of the authors that remain faithful to this ancient way of looking in two colors. They will be accompanied by very contemporary creators such as South-African Pieter Hugo whose images sometimes put shivers down our backs, or traditional artists with a love of life, like the eternal Lartigue
 44e Rencontres internationales de la photographie at Arles, from 1 July to 22 September 2013.

He is the most famous serial killer in Frances history. And yet he almost escaped justice. Henri-Désiré Landru (1869-1922) slipped through everyones fingers and was only caught through the insight of inspector Belin, who saw through the many fantastic disguises -Guillet, Frémiet, an insurance agent, a garage mechanic, etc.  the monster woman-killer. Landru would bait them by proposing to marry them through small ads in the press. He would eliminate them before selling their goods. The exhibits that were used to condemn him are shown and published in this catalogue, in particular his small notebook in which he wrote the victims names and his small, detailed sheets. When he retired to his sinister villa of Gambais, in the Yvelines area, Landru bought a round-trip ticket for himself, a one-way for the sweetheart of the day Unfortunately though the most famous charges against him  the famous stove in which it seems he burned his victims bones was sold at an auction following Landrus trial, it was bought by a fairground owner and has not been seen since
 Landru, 6h10 temps clair, by Eric Yung, éditions Télémaque/Musée des lettres et manuscrits, 2013, 256 p., 24.90

Our selection of new exhibitions in France

DUBLIN  The PhotoIreland festival will hold its 4th edition from 1 to 31 July 2013, in Dublin, Limerick and Cork.

MELLE  The Biennale of contemporary art of Melle will be held from 22 June to 29 September 2013.

NANTES - The Voyage à Nantes, the pluridisciplinary artistic festival, will be held from 28 June to 1 September 2013.

PARIS  Henri Loyrette, the former chairman of the Louvre, has been named president of Admical, an association that works in favor of the development of corporate sponsorship.

PHNOM PENH - During the 37th session of the World Heritage Committee, 19 new sites have been added to the list of UNESCO's world heritage, among them the port of Levuka (Fidji), the villa and gardens of the Medici (Italy) and the historical center of Agadez (Niger).