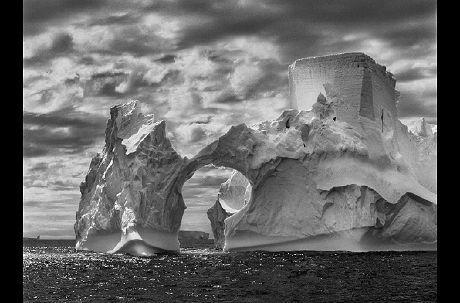 Sebastião Salgado, Iceberg between the island of Paulet and the Southern Shetland Islands in the sea of Weddell. Antarctic Peninsula, 2005 © Sebastião Salgado (exhibition at Maison européenne de la photographie, Paris).

The world according to Salgado

PARIS  The objective of this retrospective may be disinterested. It is nevertheless the result of an ambitious logistic implemented by this Brazilian photographer who became known to the world in 1986 with his report on the gold seekers of the Serra Pelada in the Amazone. The universe is as wild as that of Klondyke a century earlier. Salgado, obsessed by natures fragile beauty and by the degradations we submit it to, compelled himself to a wide tour and for eight years he travelled across the world to bring back essential images. The title alone sums up the intention of this work. Genesis leads us to a discovery of the awakenings of the world, from the Pantanal in the South Pole to the deserts of Africa and the Grand Canyon. One question underlies each of the many places presented in this exhibition: can we still save this little planet?
 Sebastiaõ Salgado, Genesis at the Maison européenne de la photographie, from 25 September 2013 to 5 January 2014.

PARIS  We have waited for him for over forty years. The artist, the one Jean Paulhan named the boss will surely not attract as many viewers as Monet but this complete retrospective pays a fair tribute to the man who together with Picasso  founded Cubism. His career nevertheless was not limited to the commotion created then on the banks of the Estaque. As the exhibition reminds us, Braque was also a Fauvist, a master of stuck paper, of landscapes and still lives. Throughout his long career - over half a century until he died in 1963- he collected major friendships such as Picasso, Kahnweiler, Giacometti, Maeght, Malraux, to only mention a few.
 Georges Braque at the Grand Palais, from 18 September 2013 to 6 January 2014.

PARIS  This accumulation of heroic or fragile nudes is a slightly modified presentation of the one that left a tantalizing trace of scandal in Vienna last autumn. We remember the naked football players by Pierre & Gilles caused a certain ripple and the Leopold Museum rode the wave and even organized an evening visit for nudists. Pierre & Gilles are the backbone of this long exhibition and appear at each phase, between David, Bouguereau, Bazille for the elder ones, Mapplethorpe and James Bidgood (with his video Pink Narcissus that wrapped up the itinerary) for the modern generation. Next to serious ones, such as Jeune Homme assis au bord de la mer by Flandrin, we will have the pleasure of refreshing our eyes and minds with some kitsch, among which those of Alfred Courmes. Obviously the exhibition can be seen as a history abstract, showing how gay images, considered shocking during the period between the two wars -like Paul Cadmus showing a couple in their bathroom- has progressively been tolerated and finally accepted.
 Masculin/Masculin, lhomme nu dans lart de 1800 à nos jours at the musée dOrsay, from 24 September 2013 to 2 February 2014.

The call from Siberia

FLORENCE - How were Malevich, Gontcharova and Filonov influenced by the immense territories to the East? How did their work express the fascination for the infinite, open spaces of the Orient? The aim of the exhibition du Palazzo Strozzi, Lavanguardia russa, la Siberia e lOriente is to show just that (Photo Ilya Mashkov, Portrait of a lady in an armchair, oil on canvas, 1913, Ekaterinburg Museum). From 27 September 2013 to 19 January 2014.

LONDON  Australia has two aspects: that of the penitentiary, similar to New-Caledonia or Cayenne, a legendary land at des antipodes, but a new nation as well, full of energy and space. Two centuries of art transcribe this symphony in Australia at the Royal Academy of Arts. From 21 September to 8 December 2013.

PARIS  The mystery of the Etruscans, of their language, their refined and feminist civilization has always fascinated specialists and the public at large. The musée Maillol presents a beautiful selection of their aesthetics funerary sculpture, silversmith works, helmets and glasses. From 18 September 2013 to 9 February 2014.

A gust of fresh, Florentine air

The large exhibition the Louvre will dedicate to the first half of the XVth century in Florence, from 26 September to 6 January, already shown at Palazzo Strozzi last spring, will allow the Parisian public to admire major pieces that never travel. Here we have Ghibertis founding relief for the Baptistery (Isaacs Sacrifice ), the Famous men and women by Andrea del Castagno, the terra cotta bust of Nicolò da Uzzano, the colossal Saint Louis of Toulouse and Horse head or the delicate Madonna Pazzi (by Donatello) or this vibrant Virgin and Child by Brunelleschi, recently identified at Fiesole. The catalogue is a reflection of this art that is difficult to show  sculpture  and on its fundamental importance at the beginning of the Renaissance, when the aim was to revamp the legacy from the Antiquity and celebrate the beauty of man. This is an initiation into very in depth knowledge, from the spiritelli (children figures) to equestrian monuments, the role of orphanages to the first private patronage, a practice that remains very familiar
 Le printemps de la Renaissance, la sculpture et les arts à Florence, 1400-1460, directed by Marc Bormand and Beatrice Paolozzi Strozzi, Officina Libraria/musée du Louvre éditions, 2013, 552 p., 45.

The towns dreamt by Farah Atassi

From far it looks like a canvas for crochet, a sifter for gold diggers, a cloud of spots, kitsch painted wall paper, maybe even a mosquito net But as we get closer comprehensible motifs gradually appear, houses with pointed roofs, buildings, sky scrapers, sort of tiny fleas on a giant grid. The success of Farah Atassi (born in 1981) is to code our urban environment and to have us discover it as if it was a secret message. The town is a narrow grid that maintains a true decorative poetry. The artist is of Syrian origin, and undoubtedly marked by a tradition of calligraphic abstraction. One cannot help seeing in these fragile grids thoughts on the sad destiny of centuries-old Alep or Damas.
 Farah Atassi is shown at the galerie Xippas (108 rue Vieille du Temple, 75003 Paris), from 7 September to 26 October 2013.

CHRISTCHURCH (New-Zealand)  Scape 7, the contemporary art biannual fair, will be held from 27 September to 29 November 2013.

FONTAINEBLEAU  The Halle of Fontainebleau, a pioneer building in concrete, built between 1936 and 1941 by engineer Nicolas Esquillan, was demolished on 23 September 2013.

PARIS  The Palais Galliera-musée de la Mode will reopen on 28 September 2013. The opening exhibition is dedicated to Azzedine Alaïa.