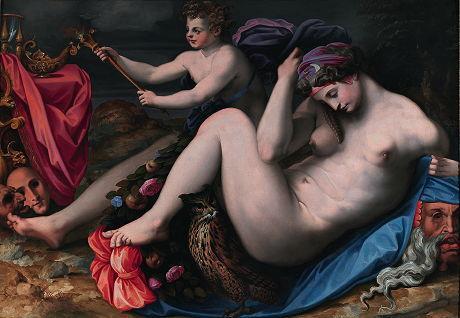 When searching for themes that will sell well certain exhibitions may by chance coincide. It is the case this week, when two major institutions  the Thyssen-Bornemisza museum in Madrid and the musée du Luxembourg in Paris  both step into the world of dreams. The first analyzes them through a movement Surrealism  that always gave them great importance. The second chose an area that is not as prone to them, the Renaissance. Here are some possible partnerships on the other side of the Pyrenees: the complicated mechanisms of Bosch and Dalí, the sleeping odalisques by Ghirlandaio and Delvaux, the absurd worlds of Piero del Cosimo and Magritte. We can easily conclude from this unexpected simultaneity that we never dream as much as when we are in a period of crisis

Kanak, art half a world away

PARIS  Kanak? The word immediately brings to mind the tragedy of Ouvéa followed by the famous hand shake between Jean-Marie Tjibaou, the leader of the pro-independence movement, and his opponent Jacques Lafleur during the agreements of Matignon in 1988. The political turmoil made everyone forget the wealth of the Kanak culture, whose interpreters have worked wood, shells and vegetable fibers for centuries. The wood sculptures on the main huts, the sculpted brackets, elaborated masks, spears, arrows and the amazing engraved bamboo: an historical gathering that proves New-Caledonia is not reduced to its nickel and its coral reef
 Kanak, lart est une parole at the musée du quai Branly, from 15 October 2013 to 26 January 2014.

PARIS  She is the myth no one can ignore: an artist who goes beyond her atrocious physical pains and imposes her femininity in a country where man is king. Her lover and then husband, mural artist Diego Rivera, was for a longtime the best known of the two. But today, Frida Kahlo is the real icon. The musée de lOrangerie places her today face to face with her half Diego but she is the real star of this contained exhibition : some fifty oil paintings on canvas, masonite, aluminum, etc., aside from the drawings and photographs, most of them on loan from the Dolores Olmedo collection, one of the main collectors of the two artists. The colors of Mexico explode in each of her still lives, whether with corn, manioc, prickly pears or arums, in her poisonous vegetations, or in her portraits of Indian women from the South (the famous mothers from the isthmus of Tehuantepec). She has a rage for living that can be seen in the little room dedicated to Fridas self-portraits of suffering, in which she draws herself bedridden and mutilated. One can be indifferent to her art but her energy fascinates us all
 Frida Kahlo-Diego Rivera, lart en fusion at the musée de lOrangerie, from 9 October 2013 to 13 January 2014.

TRENTO  His name brings back to our memories a famous robbery, that of Ecco Homo at the museum of Broletto in Novara, in 1974. But Antonello da Messina (circa 1425-1479) is a lot more than a simple hero of the crime section in the press. He is a virtuoso in the art of oil portraits, and one of the transmitters of van Eycks and van der Weydens Flemish art in Italy. His works are few and the merit of grouping them together is praiseworthy. We remember well the recent and very complete retrospective at the Scuderie del Quirinale, in Rome, in 2006. This one is more refrained and includes an assumption: that of the persistent influence of Piero della Francesca throughout Antonellos career. The National Gallery in Washington accepted to lend its only two paintings of the master, among them Madonna Benson. Aside from the loans from the Louvre and the National Gallery in London, the Crucifixion from Sibiu in Rumania and the imposing altarpiece of San Gregorio lent by his native town, Messina. Antonello did not come alone, as his son Jacobello accompanies him
 Antonello da Messina at the MART, from 5 October 2013 to 12 January 2014.

Marseille through the ages

MARSEILLE  As we know, conflicts often boost auctions  This decent sale  a selection of pretty images of Marseille as it gets ready to wrap up its role as European cultural capital  would have gone by quite unnoticed had it not aroused a true casus belli! Indeed it includes photographs by contemporary artists, such as Bernard Plossu, Gabriele Basilico and Massimo Vitali, that could have simply been kept by the Agency for the development and valorization of patrimony who commissioned it. But the latter found itself with a lack of funds and a change of status, and therefore auctioned them. Aside from these lots whose destiny could change at the last minute, we have some emblematic views of the Canebière and the Vieux-Port by Willy Ronis, of the Exposition coloniale in 1922 by Fernand Detaille, of the famous transporter bridge dynamited in 1944 by Germaine Krull, as well as rarer clichés of the old districts (Ribotta), scenes of the Resistance (Julia Pirotte) or even the Grands Travaux in 1864 with the construction of the Rue Impériale.
 Marseille en vue, on 12 October 2013 at Leclère.

Through the surprising works of Leonid Andreiev, the writer from the beginning of the XXth century, we were already familiar with the Russia of auto-chrome photographs. Here we have another vision of the empire of the tsars, also from that painful turn of the century. Sergueï Mikhaïlovitch Prokoudine-Gorsky (1863-1944) perfected a revolutionary technique that fascinated Nicolas II when he saw a major projection on velum. The author, a chemist, had been authorized to travel throughout the empire to draw it, and he produced 3500 glass plates. By some miracle we have recovered 1902 of them. These images, saved from oblivion, digitalized, are a remarkable testimony of a time that seems to stand still, with its over-dimensioned taigas covered by troikas and the traditional four wheel carts, these Kremlins in the province, the muzhiks working the land with nearly Neolithic tools  But here and there we get a glimpse of a steel bridge, of railroad tracks, of an embryo of an industrial plant: the eternal Russia will be caught up by progress
 Voyage dans lancienne Russie, photographies de Sergueï Mikhaïlovitch Progoudine-Gorsky, présenté par Véronique Koehler, Albin Michel, 2013, 176 p., 29. Not to be missed: the exhibition at the musée Zadkine, from 9 October 2013 to 13 April 2014.

A series shot in 2008-2013, inspired by photojournalism and the media (Photo: Luta Continua, 1974, 2012, from Disco Angola. Courtesy the artist/David Zwirner Gallery)

PARIS  The musée du Montparnasse will be closing at the end of 2013, since the lease of its association was not renewed by the Paris authorities (Mairie de Paris). The site will be entrusted to the musée de la Poste while the latter will be under works, before it is possibly leased again at the end of 2014.

The conflict on Le Figaro

The press release from the Ville de Paris

ZURICH  Art International, the contemporary art fair, will be held from 11 to 13 October 2013.