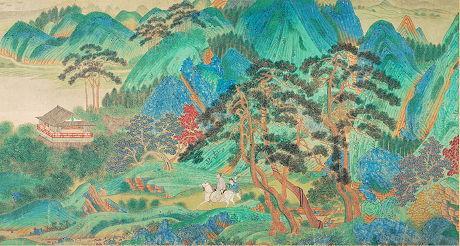 When China was calm and contemplative

China has become the economic lung of the world, boasts of unique growth rates, produces day and night, and has thus become a scarecrow for the Western world. Everyone does give it credit today for its speed, productivity, adaptability, mobility and consumerism. All these qualities  or faults, depending on the point of view - all seem worlds away from the unforgettable, centuries-old characteristics of the Middle Kingdom. Can one find a way of confronting these two opposing worlds? By plunging into the retrospective of one thousand years of Chinese painting the Victoria & Albert Museum offers the public. One can see literati meditating in front of a rock or a tree, homes planted on the shores of lakes as flat as mirrors, unperceivable changes of time, horse riders crossing unlimited areas, water lilies in a river, court ladies working silk One section of the exhibition is even entitled Embracing Solitude and shows the production of Buddhist monks fleeing the world in the XIVth century. Are we viewing another China, or simply a partial image that reassures us in our mental clichés? For at the same time, in 1244, Chen Rong produced his famous work, the silk panel of the Nine Dragons entering a merciless combat
 Masterpieces of Chinese painting at the Victoria & Albert Museum, from 26 October 2013 to 19 January 2014.

LOUVAIN  The M Museum invites us to a major rediscovery, and with it to an equally important question: how can artists who knew such fame during their lives be forgotten after their demise? This is the case of Michel Coxcie, even though his nickname was the Flemish Raffaello at the time of his splendor. As a young artist, this native son from Malines conquered Rome where he was greatly appreciated by Vasari , worked at Saint Peters and decorated the church of Santa Maria dellAnima in the 1530s. He then enjoyed all honors at the Spanish court. He was protected by Emperor Charles the Fifth and then by his son Philip II, he decorated their palaces and fed their personal collections with mythological paintings and religious allegories. Maybe he was hurt by his long life. When he passed away at the age of 93 in 1592, the style he had perfected in Italy in the 1520s was no longer in fashion One of the highlights of the exhibition is his copy of the polyptych of theMystic Lamb by the van Eyck brothers. It is complete, contrary to the original and of a remarkable quality, with its different panels exceptionally reunited for this event.
 Michel Coxcie at M Museum, from 31 October 2013 to 23 February 2014.

PARIS  Using the words of Alexandre Vialatte, one could say Surrealism is inexhaustible. Various museums have already made parallels with woman, language, war or cinema. This new season brings us other consubstantial relations, among them Surrealism in New York (at the musée des Beaux-Arts in Lyon), Surrealism and the dream (at the Museo Thyssen-Bornemisza in Madrid), Surrealism and Victor Hugo (at the Maison de Victor Hugo in Paris) while this week we have the arrival of a major show at the Centre Pompidou, dedicated to Surrealism and the object. This link, nourished in the beginning by de Chiricos models and Duchamps bottle holder, closes in with the membership of the heads of the movement to the French Communist Party, while Breton called for a physics of poetry. We will see incongruent artifacts by Dalí, Meret Oppenheim, or Bellmer, cadavres exquis between the macabre and eroticism. Here is a new assessment of the movement, three quarters of a century after the pioneer event at the galerie Ratton, Exposition surréaliste dobjets.
 Le surréalisme et lobjet at the Centre Pompidou, from 30 October 2013 to 3 March 2014.

BERLIN - Wien-Berlin, Kunst zweier Metropolen. Von Schiele bis Grosz (Vienna-Berlin, The art of two cities, from Schiele to Grosz) draws the portrait of two metropolis united by cultural links as well as political ones. It starts at the Berlinisches Galerie before moving in February 2014 to the Belvedere of Vienna. From 24 October 2013 to 27 January 2014.

PARIS  Following its unexpected success last year, the Chalet Society is back with an exhibit of contemporary art in premises that are as non-standardized as the work shown (14 boulevard Raspail): The Hidden World, or the didactic art collection from Jim Shaw. From 24 October to 29 December 2013.

The jury of the Marcel-Duchamp prize confirms its attraction for untypical artists and for conceptual approaches. The winner for 2013, crowned on the day before the FIAC closed its doors, is a young female artist of Moroccan origin, born in 1974, who took some time to detach herself from her cultural conditioning. The latter could take the shape of the arabesque or embroidery, from which she drew her inspiration for a long time before sublimating it in installations. The arabesques shattered and the ceramic, zellig tiles, obviously non-figurative, turned into paper pages glued to the wall, perspiring blue from the stencil. But the surrealist poetry is never too far, with the men with bowler hats full of ink - a material she loves dearly  playing-cards and rubble that refer to the elements of fortune, with bricks and even with sugar
 Latifa Echakhch is represented by the Kamel Mennour gallery in Paris. She will exhibit in the autumn of 2014 at Espace 315 in the Centre Pompidou. She is also present in two collective exhibitions: at the Synagogue of Delme until 16 February 2014 and at the Musée dart moderne de la Ville de Paris (Decorum exhibition) until 9 February 2014.

The process of using anecdotes and tragedies is worthy of praise if it helps to awaken the public at large to art. It seems it is what this book dedicated to damned artists aims for. We regret certain nominees we have already seen in this category still appear: Van Gogh, his ear and his gun, Camille Claudel, her craziness, her brother and Rodin, Frida Kahlo and her steel vertebrae. Fortunately, there are the other, less mediatized ones, such as depressive Hugo van der Goes or Hercules Seghers, who was so poor he had no canvas to paint on so he did it on his bed sheets and died as he fell down the stairs. Others have disappeared from our memories. Constance Mayer, the daughter of a wash woman and Greuzes student. She became the mistress of Prudhon, signed half of his drawings and slit her throat when he refused to marry her. Bresdin the visionary, who lacked talent, but had genius according to Baudelaire, could never sell his hallucinated prints and fed his family pickled herring. There is also Méryon, who was persuaded Napoleon III persecuted him, and he starved himself to death. Their bumpy existence illuminated their work with a strange light
 Artistes maudits, le récit de 30 destins tragiques by Karim Ressouni-Demigneux, Beaux Arts éditions, 2013, 216 p., 29.

ISTANBUL  Art Istanbul, the week of contemporary art, will be held from 4 to 10 November 2013.

PARIS  The first known letter to have been hand-written by Voltaire, dates back to 1711 when he was 17 years old and was finishing his studies. It will be up for auction at Christies on 6 November 2013.

SINGAPORE  The Singapore Biennale of Contemporary art was inaugurated on 24 October 2013, and will last until 16 February 2014.

A series never shown before, sort of sun spots by an artist who stopped painting in 2011 after producing 1000 paintings.