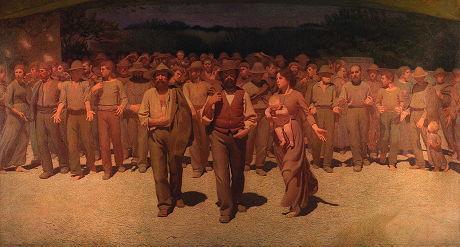 The most famous Italian painting from the XXth century

MILANO  It is a world-known icon, the traditional cover of many a history book. It rings a bell for many, but few are capable of giving the painters name (famous art historian André Chastel only dedicated two lines to it in Lart italien. A monographic exhibition should finally do justice to this famous Quarto Stato(The fourth Estate) and its creator, Giuseppe Pellizza da Volpedo (1868-1907), a native of Piedmont. The artist, who died before the age of 40, was influenced by the Impressionist movement (we know he travelled twice to Paris) and by landscape painting. But he remained faithful to social themes that seemed fundamental to him in his country that was freshly united. From the Ambassadors of hunger to the Torrent (Fiumana) -the works first titles-, the preparatory work is described with paintings and photographs. An X-ray at scale 1 of what was first called The Workers March shows the artists change of mind the architectural décor disappears and the main characters now resemble a compact formation. The change of the title and composition turned the giant painting, finished in 1901 after three years of work, to another destiny: a simple social testimony became a real manifesto
 Giuseppe Pellizza da Volpedo e il Quarto Stato at the Museo del Novecento, from 15 November 2013 to 9 March 2014.

LYON  The town authorities had greatly hesitated before organizing a third International Exhibition. That of 1872 had been a true financial fiasco, the one in 1894 had seen the murder of President Carnot in the Tête dor park. Understandably the young mayor, Edouard Herriot, was rather circumspect when he launched the city into this new adventure. We know the circumstances under which it took place: two months after its opening World War I broke out, confirming the bad omens! This exhibition recreates the historical setting and recalls all it left the city, lifting it to the status of a European metropolis: modern networks (roads, water, a sewage system), a technological leap in the textile industry, and a series of emblematic buildings marked by an hygienist approach. The most famous is the Halle designed by Tony Garnier, the true heart of the Exposition, surrounded by 60 pavilions over 50 hectares. This symbol of XXth century architecture reflects the turmoils of its time: it would close ahead of time to be transformed into a weapons factory .
 Lyon, centre du monde, Exposition internationale urbaine de 1914 at the musées Gadagne, from 21 November 2013 to 27 April 2014.

These exhibitions have just opened

Rowlandson, a master of satire

Bringing Pompei back to life

MUNICH - It is difficult to compete with the British Museum, which recently hit the jack pot with an exhibit on the dead city of the Vesuvius: the Hypo Kunsthalle will meet the challenge with another Pompéi (ill.: a burnt piece of bread). From 15 November 2013 to 23 March 2014.

PARIS  In the museum that was also his home, Rodin et lantique shows the relationship between the sculptor and the major Greco-Roman statues. From 19 November 2013 to 16 February 2014.

Eva Kotatkova: away with standards!

Conceptual art is alive and well! As long as we can include in this category all the forms of creativity that question our relationship to the world through installations and performances Eva Kotakova (born in 1982), who was present at the last Biennale of Venice, is a representative of this current that has always flourished in Central Europe where it was a real form of resistance during authoritarian regimes. She is a student of conditioning through school, clothes, penitentiaries, etc., and accuses standards for being stifling. Her collages, interventions with autistic persons, animals, her questioning on sleep, on knowledge and on insanity may give some therapeutic and educational indications. But they often include an unexpected aesthetic and poetic value, which, according to the case, may bring to mind Calders mobiles or the collages of the New Realists.
 Eva Kotatkova is exhibited at the Museum of Contemporary art in Wroclaw (Poland), where another exhibit is equally dedicated to Jiri Kovanda.

A statue of Marianne - the symbol of France - full of migrants' blood: a reflection on the current immigration policy...

PARIS  To collect popular art is not looked upon as a noble discipline. It has nothing to do with History nor Art with a capital H or A  But what a pleasure one has at times, when discovering these objects patiently polished during family meetings around the fire or polished one thousand times on an artisans workbench. They surely have an extra ounce of soul, due to their « poverty and their use value. The amateurs who collect them often do so with bulimia. It is the case of Patrick Diant, whose collection, inherited and then largely enriched, occupies two days of sales. There are all sorts of canes in all sizes, forms and with all the motifs possible (one for example with the inscription « souvenir from the countryside in Mexico »), spoons, pet peeves, pipe ducts, tobacco graters, clogs Of course wood is the star of the day, be it boxwood, beamtree, maple or black walnut, as well as metal (shovels for embers), horn (a tobacco snuffbox in the form of a heart). Half of these objects no longer have any meaning for us: bread markers, boards for calendering laundry, devices to straighten lace, spoons to take off cream or powder horns. This is an open door to the sociology of our past
 Le monde merveilleux de Patrick Diant, at hôtel Drouot on 21 and 22 November 2013 (SVV Ferri).

Is there a Masonic-type painting and if so, how does one recognize it? These are the questions that more or less guide the author in this intriguing panorama that pretends to reveal some secrets, such as the idea that Géricault was a Mason and showered his famous Radeau de la Méduse with transparent symbols. As one reads on we learn that many other artists, such as Hogarth or Félicien Rops, all had a close tie with various lodges and that some suffered from that, like Alfons Mucha, brutally questioned by the Nazis in Prague when he was 80 years old, which precipitated his demise. Other less-known anecdotes and characters shed light on the theme: Joseph Vernet illustrated Paul et Virginie and convinced its author, Bernardin de Saint-Pierre, whom he met in a lodge meeting, not to throw the manuscript into the fire after a first catastrophic public reading. Juan Gris, who was introduced into the obedience by Lipschitz in 1922, always started his paintings with a compass and a T-square  Grant Wood (1891-1942), who was from a devoted Quaker family in Iowa, joined the Masons in part to escape the stifling atmosphere of the conservative Middle West. Up to his death, the painter with overalls was systematically ostracized, which did not prevent him from producing one of the icons of American painting of the XXth century, American Gothic.
 De la loge à latelier, peintres et sculpteurs francs-maçons, by Nathalie Kaufmann-Khelifa, éditions du Toucan, 2013, 180 p., 39

ANGKOR The 9th edition of Angkor Photo Festival will be held from 23 to 30 November 2013.

DUNKERQUE - The new building of the Fonds régional dart contemporain Nord-Pas-de-Calais, designed by architects Lacaton & Vassal, was inaugurated on 16 November 2013.

MEXICO  The Jumex museum of contemporary art, owned by the Jumex foundation (the name of the multinational fruit juice company) was inaugurated on 19 November 2013.

PARIS  Bernard Blistène has been named to direct the Musée national dart moderne, to replace Alfred Pacquement, who will be retiring at the end of the year.

SARCELLES  The 16e Biennale internationale de la gravure will be held from 23 November to 8 December 2013.

STRASBURG  The Musée historique opened its new rooms, from Napoleon to the present, on 16 November 2013.