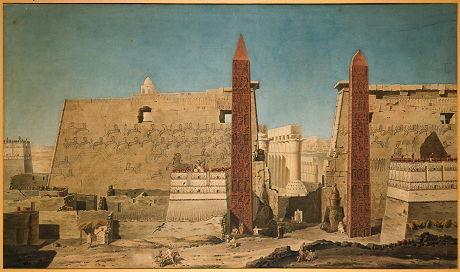 The case of the obelisk

Nothing to write home about: 230 tonnes, 23 metres tall, rooted in the sands of Upper -Egypt, 700 km away from the mouth of the Nile river In 1829, when Mehemet-Ali offered France the obelisks from Luxor, it really seemed like a poisoned chalice. How could such a huge masse be shipped? This was an unusual adventure even if in the end it only concerned one of the two monoliths. This original exhibition, based on historical documents and models, tells it all. The saga would last seven years, including the la construction of a special vessel, the Luxor, the expedition of 121 men (10 of which would die on site from exhaustion or illness), the intervention of the first Navy steam vessel (the Sphinx), and finally the lifting of the monument on the place de la Concorde one beautiful autumn day - 25 October 1836. A question subsides: how did man succeed, at the time of Ramses II, three thousand years earlier, to stand up this gigantic limestone needle? The exhibition deserves a sequel, just like in Hollywood.
 Le voyage de lobélisque, Louxor-Paris 1829-1836, at the musée de la Marine, from 12 February to 6 July 2014.

Cartier-Bresson, the eye of the century

PARIS - In 1945, the MoMA prepared an exhibition of a European photographer they thought had died during the war. Actually he had just completed for the American Service of War Information a movie on the return of prisoners. At the time there was neither internet nor twitter: consequently it took some time for the error to be corrected. The artist luckily lived much longer than the exhibition (1947) and this false alarm, as he passed away in 2004 at the age of 95. Obviously we refer to Henri Cartier-Bresson, the theorist of the decisive moment, the French photographer with the greatest world renown. His career of course covered various decades and coincided with major events such as World War II, the independence of African states, the Vietnam War, May 68 We can add it started with painting at the time of Surrealism (1926) and ended with drawing and delved into movie making. That gives us an idea of the challenge, with a mere 500 works presented. The original idea is that there are various facets to Cartier-Bresson, a true Janus with a multitude of faces: the friend of René Crevel, the assistant of Jean Renoir, a highly accomplished traveler (Africa in 1930, Mexico in 1934) and of course, the photoreporter and co-founder of the Magnum agency.
 Henri Cartier-Bresson at Centre Pompidou, from 12 February to 9 June 2014.

OTHER EXHIBITIONS NOT TO BE MISSED

BASEL  James Ensor (1860-1949) enjoyed disguising the sordid aspect of humanity under a great quantity of masks. This ironic carnival a total of sixty works  is presented at the Kunstmuseum.
 From 9 February to 18 May 2014

Vincent - the other one - is back

MONTPELLIER  François-André Vincent (1746-1816) was often opposed to David, then forgotten, then confused with Fragonard or Velázquez. Now he is out of the shadows. After showing in Tours, the exhibition has chosen the musée Fabre as the second phase of its resurrection.
 From 8 February to 11 May 2014

PARIS  Poussin, Claude, Paul Bril are but some of the artists who were known for the landscape in Rome during the 17th century. This exhibition in the Cabinet Jean Bonna, at the Palais des Beaux-arts, includes works by other, often unknown artists.
 From 11 February to 2 May 2014

Maurice Denis from the Thomas' collection

PARIS  Very few museums today can pride themselves in owning works by Maurice Denis. At the beginning of the XXth century, one man alone owned 120 paintings by the Nabi master. That alone could suffice to make the man extraordinary, had he not held other cards in his hand: a business man and a man of culture, Gabriel Thomas (1854-1932) contributed to the building of the Eiffel Tower and the théâtre des Champs-Élysées, he commissioned the famous Héraclès Archer to Bourdelle and was the middle man in the commission of the Rainy chapel to Le Corbusier. At age fifty he converted and entered the Dominican order, a spiritual evolution that was close to the one Maurice Denis also followed. The artists later work was marked by this deep faith. A few pieces that belonged to Gabriel Thomas, and that he kept in his house in Meudon, Les Capucines, are brought together in this auction, among them an Annonciation. Thomas owned seven different variations of this biblical theme.
 De lancienne collection Gabriel Thomas, sale on 12 February 2014 at hôtel Drouot (SVV Beaussant-Lefèvre)

PARIS  Mathieu Pernot, a young photographer in his forties, the worthy heir of Depardon and Koudelka, renews the codes of the documentary image. He works by series, influenced by the theme of travels and wanderings, and has often chosen as his subjects the marginal communities, the gypsies, prisoners, migrants and other displaced people. This retrospective presents a number of characters followed over long periods of time, such as the gypsy community of Arles, or on the contrary, taken at a given moment, such as the Afghan refugees. Le Feu is a series produced for this exhibition and which illustrates a tradition of Travellers: to set fire to the caravan of the deceased.
 Mathieu Pernot, la Traversée at the Jeu de paume, from 11 February to 18 May 2014.

In the field of art, the publication of books is closely linked to the calendar of major exhibitions and other anniversaries. One can only rejoice when a scholarly work, the result of years of work in sectors that are not the focus of the media, manage to wind their way to the table of a book store. This is a perfect example. It can put-off any non-initiated mortal. But in fact this catalogue of the pewter pottery masters is in fact a fascinating plunge into micro-history. The legislation of the profession, the various types of punches, the rigorous regulation called the jurande, the catalogue of the most used objects (from a pitcher to the mustard bowl including the clyster that was used for intestinal washings as well as to baptise in utero unviable children) tell us so much about the Parisian society in the XVIIth and XVIIIth centuries. The citys official list in 1773 tells that the oldest artist, Charles Lausmonier, had his masters since 1707! The impressive census -190 pages- of the pottery master allows us to learn more. We learn that the named Lausmonier died on 29 July 1775, at age 88, at his sons house, an apothecary on rue Aubry-le-Boucher, and that his modest belongings did not even allow him to pay for his burial. Pewter does not turn into gold.
 Étains, maîtres potiers détain Paris 1643-1791, by Philippe Boucaud and Michel Schonn, Chez les auteurs, 2014, 432 p., 112.