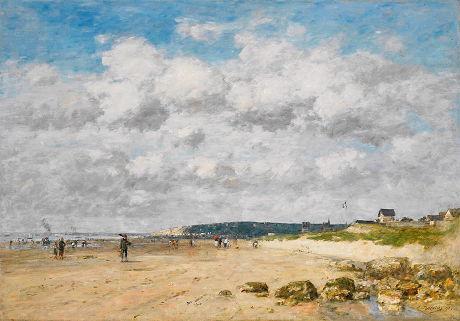 Those Impressionists you have never seen

PARIS  With this type of title, you can be sure the crowds will flock to the exhibit. The organisers did not dare go so far in their marketing but that had been the original idea. The paintings they have brought together are indeed never usually seen by the public. Rather than being in a musuem, a rather normal place for an Impressionist masterpiece, the most famous art movement in the world they still hang discreetly in the calm of private collections. While we are not surprised to see the Little Dancer, Degas famous sculpture, for it has been seen elsewhere: the 13 other versions are in the major institutions ; on the other hand we are by the works by Corot and Jongkind of their first years, this very large one by Boudin (the Beach of Bénerville). Next to a beautiful selection of Sisley, Monet or Pissarro, there are some even rarer works by Guillaumin, Bazille or Caillebotte. The women remain the smallest part of the show. There are some works by Eva Gonzalès and Berthe Morisot, with a beatiful selection of nervous watercolors to ensure an idea of gender equality.
 Les Impressionnistes en privé. Cent chefs-duvre de collections particulières at the musée Marmottan Claude Monet, from 13 February to 6 July 2014

Fougeron, in line with the Party

ROUBAIX If there was ever a French version of socialist realism it was personified by André Fougeron (1913-1998), one of its best representatives. Like Gorki and Jack London he was from a modest background, being a steel worker. He gave himself completely to his political commitment by supporting the Spanish Republicans, was a member of the French Communist Party, a resistant during WW II, a prisoner, an illegal printer. He was closely attached to the dogma, like when he joined others to howl against Picasso and his famous drawing of Stalin. There remains nevertheless a vision, close to that of Guttuso in Italy, in a post-war society with a strong social link (kids in the street, Paris women at the market, large demonstrations on May 1st), marked by inequalities -poverty, immigrant workers in their slum towns, homeless). So many themes that are still current today, but which are no longer represented in contemporary paintings are find refuge in photographs or videos.
 André Fougeron, « Voilà qui fait problème vrai » at la Piscine, from 15 February to 18 May 2014

OTHER EXHIBITIONS NOT TO BE MISSED

Hamilton, the king of Pop

LONDON  The bad boy of British pop art, Richard Hamilton immortalised a few iconic figures of the 60s and, like his American contemporaries Warhol and Lichtenstein, nourished his art with products from the consumer society. The Tate Modern takes a look. From 13 February to 26 May 2014.

ROVERETO  He delved into everything: drawing, painting, architecture, photo, cinema during the Revolutionary period in Russia. El Lissitzky (1890-1941) is presented through some 100 works at the MART. From 15 February to 8 June 2014.

VILLENEUVE-DASCQ Meret Oppenheim (1913-1985) was an original figure in the Surrealist movement and created a sensation in Bretons group with her strange objects, when she was only 20 years old. The rest of her career was less mediatised but just as prolific, as we can see in this exhibit at the LAM. From 14 February to 1 June 2014

The taste of the Prassinos

PARIS  Among the Prassinos, a creative set of brothers with a cosmopolitan background born from a Greek father and an Italian mother, settled in France), there was Mario, the painter (1916-1985) and Gisèle, the writer, born in 1920. The latter was, just like Meret Oppenheim whom we mentioned a little earlier, one of the rare women to be enthroned by the Surrealist movement. She was only 14 years old when she was chosen as the emblematic interpreter of automatic writing, and then she appeared in all the fundamental anthologies of Surrealism. The sale offers a series of documents -manuscripts, correspondence which show how the brother and sister found themselves at the heart of a cultural explosion, as well as rare editions such as the famous Sauterelle arthritique by Gisèle Prassinos. Printed in 1935 by Guy Lévis-Mano (5000), it includes the photo by Man Ray that shows the adolescent with the main actors of the movement.
 Collection Gisèle et Mario Prassinos 13 February 2014 at hôtel Drouot (SVV Rémy Le Fur et Associés).

PARIS  South America has always been a wealthy source of optic and kinetic art. Argentine artists Julio Le Parc and Martha Boto, the Venezuelan Soto met success in Europe with their lights, their rhythms, their straight, broken and pulsed lines. Some in this unequal group did not succeed to reach such a wide audience. Gego (abbreviation for Gertrud Goldschmidt, 1912-1994), a compatriot of Sotos, is one example. Twenty years after her death she is becomes a center of interest with her surprising stream networks, her spider webs that invade the space, a motif of the frame, the feeling of being locked up that other artists continue to experiment with success, such as Japanese artist Chiharu Shiota, Polish artist Ludwika Ogorzelec, Belgian Arne Quinze, or Argentine Tomás Saraceno. Is it an allegory of the Germany she left in 1939? Or a simple variation on the crucial motif of the line? The work of art leaves the door open to a multitude of interpretations
 Gego, la poétique de lespace at the Maison de lAmérique latine (217 boulevard Saint-Germain, 75007 Paris), from 14 February to 14 May 2014.

Experiments on mirror that reveal a strange world of illusions

We know many artist couples: Ilya and Emilia Kabakov who will be in the limelight for Monumenta at the Grand Palais in May_, Gilbert & George, Christo and Marie-Jeanne, the Bechers The Poiriers are definitely part of that club and one of the interesting aspects of this book is to decipher the binary operating mode. We look more in detail into their obsessions, such as their work on remains and ruins, which have left us some spicy anecdotes: when, for example, as they had just finished making some copies in Pompey, the guards thought they were robbing the columns. Anne, born in 1941, was brought up in Marseille while Patrick, born in 1942, was brought up in Nantes. Their paths crossed at the school of Arts déco and they never parted: May 68, Villa Médicis at the time of Balthus, the numerous trips, the exhibitions  as well as their shared sorrows such as the brutal death of their only son in 2002. The strength of their relationship can be resumed by one anecdote: Anne and Patrick Poirier both applied to one same teaching job. A true puzzle for the administration which rejected them  twice.
 Anne et Patrick Poirier, Dans les nervures du temps, interviews with avec Françoise Jaunin, La Bibliothèque des Arts, 2013, 160 p.,15.