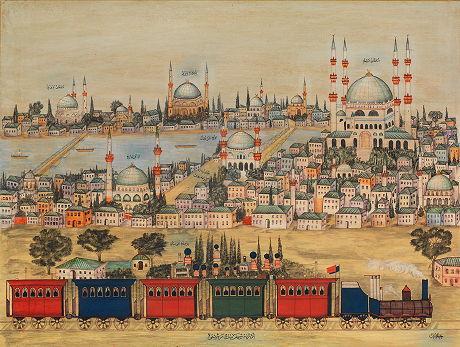 PARIS  It symbolises both traveling, freedom, exoticism and luxury. In one simple word, the essence of the Belle Epoque. The myth of the Orient Express, the luxurious train launched by Belgian Georges Nagelmackers in 1883, has resisted the passage of time, in spite of its disappearance following World War II. As writer Edmond About said when it was born: Constantinople has become a suburb of Paris. It inspired writers such as Agatha Christie, Graham Greene or Maurice Dekobra (the poet of the sleeping cars). It also fed the imaginations of movie directors such as Ophuls, Mankiewicz or Lumet, as well as Lalique or British cabinet maker Albert Dunn, authors of the lavish decors haunted by Mata Hari, Marlene Dietrich or Josephine Baker. The Orient Express comes back to life in a staging derived from the famous cars and the trunks carried by the travellers. The sponsors from the French national railway compay, the SNCF, seem to be interested since they have bought the brand and have somehow insinuated the famous line could be reborn from its ashes
 Il était une fois lOrient Express at the Institut du monde arabe, from 4 April to 31 August 2014.

Paris 1900, nostalgia for the Belle Epoque

PARIS  It is funny to see sometimes how certain exhibitions can reflect one another in a surprising way. Between the sumptuous cosmopolitans of the Orient Express and the joyous vitality of Paris in 1900, it is a real analogy. The scope here is very wide, encompassing painting, the birth of Art nouveau (pushed by gallery owner Bing), fashion (Worth and the Paquin sisters), music (Debussy), patronage (countess Greffulhe or princess de Polignac), legal and forbidden pleasures (from French cancan to absinthe) and even the first steps of movies with Méliès and the Lumière brothers. Which building could better host this expansive show with 600 works of art than the Petit Palais, one of the major buildings of the Exposition universelle in 1900, which then attracted  51 million visitors? Next to Mucha, Rodin and Toulouse-Lautrec, the retrospective allows us to show such fashionable painters as Gervex or Béraud, the interpreters of a new world that would be crushed when World War I broke out.
 Paris 1900, la ville spectacle at the Petit Palais, from 2 April to 17 August 2014.

LONDON  In the years following the war Italian fashion became a serious risk to the French hegemony. From the Fontana sisters to Valentino, from Ferragamo to Pucci, the fashion houses on the other side of the Alps combined century-old know-how and modern marketing, and thus glowed on the catwalks in Europe and seduced Hollywood stars. The exhibition brings together choice pieces but also aims at being a prospective study, asking what the future of globalisation can hold in store for Italian fashion? The capital of the major fashion houses has never been so international and the famous textile plants in Prato are increasingly controled by the Chinese
 Italian Fashion, 1945-2014 at the Victoria & Albert Museum, from 5 April to 27 July 2014.

Sert, the architect of light

SAINT-PAUL-DE-VENCE  The Maeght foundation is celebrating its 50th anniversary by highlighting the author of its building, Catalan architect Josep Lluís Sert (1901-1983). A colleague of Le Corbusier, a friend of Miró, for whom he built the workshop in Mayorca, one often forgets this cultivated and cosmopolitan architect has an impressive C.V. which the exhibit details. When he was young he was above all the author of a symbolic building, the Spanish pavilion at the Universal Exhibition in Paris in 1937, where Guernica was shown for the first time.
 Lart et larchitecture de Josep Lluís Sert at the fondation Maeght, from 5 April to 9 June 2014.

LE TOUQUET  Painter Henri Le Sidaner (1862-1939) was influenced by the Impressionist and Nabi movements. His taste for nature and landscapes can be seen in the canvases dedicated to his cherished garden in Gerberoy. In this retrospective carried out in four parts, together with the museums of Cambrai, Dunkerque and Etaples, we also meet his closest circle of friends, including his patron Henri Duhem or painter Henri Martin.
 Le Sidaner et ses amitiés artistiques at the musée du Touquet, from 5 April to 28 September 2014.

MILANO  The list of his talents is endless, as Bruno Munari (1907-1998) was a painter, photographer, movie director, poet, graphic artist and of course a designer, the main source of his audience. His equally very numerous friends, from Max Bill to Vasarely and Giulio Paolini, put him in the center of the Italian and European artistic world. The exhibition draws up an assessment of this relentless cultural activist.
 Munari politecnico at the Museo del Novecento, from 6 April to 7 September 2014.

The call of the Sioux

PARIS  The Indians of the Plains are in the limelight, as the musée du quai Branly dedicates a large exhibition to them as of 8 April. Therefore this auction could not have occurred at a better moment. It brings together elements from two historic collections, of which a part is already at the museum. They were built by two persons with a passion for this art, as of the thirties when most of these objects were still easily accessible. With an obsession similar to André Bretons fascination for the Kachina dolls, Paul Coze (1903-1974) and Maurice Dérumaux (1901-1985) focused on the productions of the communities from the North (Iroquois, Sioux). These are unique for their nomad homes (teepees) and by their art in working with pearls, which gives extraordinary creations that combine grains, shells and Murano pearls imported by the Europeans.
 Indiens des Plaines, collection Martine Dérumaux. Hôtel Drouot on 4 April 2014 (Tessier & Sarrou)

George Rousse, the architect of trompe-lil

His website describes him as a painter, photographer, architect. Indeed his art is at the crossroads of those three disciplines. Georges Rousse intervenes on built constructions, by painting motifs that must be seen from a specific angle to reveal a particular image. But he is not only a virtuoso of trompe-lil, since his interventions also help requalify abandoned areas and push us to reclaim ownership of our urban environment. Be it museums or theaters, castles (Chambord for example) or parking lots, abandoned industrial plants and symbolic sites (Ramallah, Jerusalem, the Central European Bank, the prison of Saint-Paul in Lyons, or slums in Mumbai), they are all ephemeral by nature and can therefore only survive through the testimony of photography.
 Georges Rousse, utopies partagées presents 32 years of creations at the Plateau (Lyon), from 4 April to 26 July 2014.

JEANNE SUSPLUGAS - MONKEY ON BACK

The artist, born in 1974, explores the theme of addiction

Rose Valland: thanks to Hollywood

A cartoon strip was dedicated to her just a few years ago, by Catel Muller and Emmanuelle Pollack, proving she did indeed have the makings of a heroine. The movie, Monuments Men, where she is interpreted by Cate Blanchett, has just made her world famous. What coincidences occurred, needed to give her this recognition? For the intervention of Rose Valland (1898-1980), a curator at the musée du Jeu de paume during the German Occupation, had been known for a long time. Janet Flanner, the correspondant of the New Yorker, mentions her in her vast report of February  March 1947 on the men and women who moved to counter the plundering of art by the Nazis. And she was also well exposed in 1964, with her role played by actress Suzanne Flon in a succesful movie by John Frankenheimer, The Train. She herself had written a detailed report on her commitment, first in Paris then in Germany, at Lindau or Baden-Baden. This Front de lart, published in 1961 with 4000 copies, had been finished off by Plon in 1966, when Rose Valland saved 500 copies by buying them herself with her savings, at 3 francs a piece. This same book, never to be found since, has now been published again, with detailed commentaries and an indispensable index. It is as fascinating as a novel and is the priceless complement to George Clooneys movie.
 Le Front de lart, défense des collections françaises, 1939-1945, by Rose Valland, Réunion des musées nationaux, 2014, 408 p., 22 Euros.