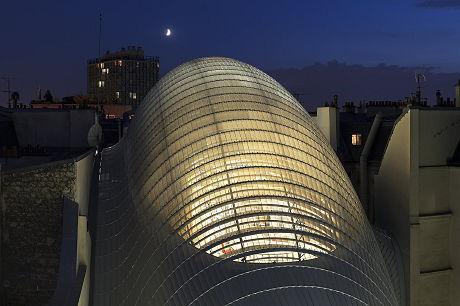 Paris shows off its strength

Does France still have a role to play? Is it still a world power? A number of recent editorials, including that of well-known Paul Krugman in the New York Times, following the change of the French government at the end of August this year seems to imply this. Hurt in its pride, the French capital intends to show that in another field, that of culture and tourism, it is still number one, even at a world level. It is the world number one tourist destination, the number one European destination for Chinese tourists. It is equipping itself with an impressive number of palaces (the most recently opened the Peninsula, and great works are under way at the Ritz, the Crillon, and the Lutétia). But is is in the world of arts that the capital wishes to mark a difference. Aside from the usual offer of major exhibitions and fairs (see below), she is preparing the opening a series of spectacular institutions. In September and October for example, we will see president Hollande, mistreated by opinion polls, cut the red ribbon of the Pathé-Seydoux foundation for cinema (designed by Renzo Piano) and the Louis Vuitton foundation (by Frank Gehry) as well as the Picasso museum rejuvenated by Jean-François Bodin. I have two loves, my country and Paris Joséphine Baker used to sing. All of these events wil add wood to the fire of seduction.

PARIS - The debate is far from being over. Will we ever know if Perugino (1450-1523), considered in 1500 the greatest master of Italy, gave painting lessons to Raffaello? This exhibition tries to prove it once and for all by putting works of the two artists side by side, in particular the altarpiece of Saint Nicolas of Tolentino, a work of the young Raffaello. But this is above all an opportunity to rediscover the painter of the sweet madonas, the rolling landscapes which pleased monks, the bourgeois and the Popes (he was one of the first to intervene in the Sistine Chapel). His religious painting is always elegant and the true iconography of the Counter-Reformation. His saints, even when pierced with arrows, pose like celebrities and the flames from Hell seem to be definitely warded off.
 Pérugin, maître de Raphaël at the musée Jacquemart-André, from 12 Septembre 2014 to 19 January 2015.

PARIS - They are the latest fad. Even on TV where the poison is ready to pour out of their rings. The Borgia will surely have a hard time to get out of their scandalous reputation! Simony, incest, nepotism, corruption, serial murders: one does not want to be associated to Pope Alexander VI and his son Cesare. Victor Hugo is greatly responsible for fomenting this reputtion with his apocaliptic description of Lucretia in one of his most sucesful works. But the musée Maillol is here to remind us that behind this blood-red decor theBorgia were also humanists and patrons  Perugino, Pinturicchio and even Michel-Angelo could vouch for that.
 Les Borgia at the musée Maillol, from 17 Septembre 2014 to 15 February 2015.

Bernard, Emile for his friends

PARIS - Among the founders of the school of Pont-Aven, he is the least known. Gauguin, Maurice Denis and even the beautiful name of Sérusier are household names today. The time has come to correct this injustice and to discover the long career of Emile Bernard (1868-1941), which was made of warm colours and voluntary exiles  like the ten years spent in Egypt which transformed the Nabi into an Orientalist painter. But he never turned away from Symbolism nor from a traditionalist reaction in his later years, remaining an artist who scoffed at definitions that were too easy.
 Emile Bernard at the musée de lOrangerie, from 17 Septembre 2014 to 5 January 2015.

Niki in a large format

PARIS - She is one fo the icons of teh second half of the XXth century. a feminist, independant minded, beautiful and a tortured soul, Niki de Saint Phalle (1930-2002) produced works the public at large quickly identifies,such as the large paper-mache or resin Nanas, among which some created a scandal like the one visitors enterd through the vagina at the Moderna Museet in Stockholm in 1966. The retrospective at the Grand Palais presents two hundred pieces to remind us of what we have somewhat forgotten, in particular her shot-oaintings made with a rifle full of paint, her mosaic altars or her assemblages of consumer society objects, which bring her close to Rauschenberg or her companion Tinguely.
 Niki de Saint Phalle, at Grand Palais, from 17 Septembre 2014 to 2 February 2015.

A summit of antiquarians

PARIS - The Biennale of Antique dealers used to be the number one event of its kind. But when TEFAF Maastricht emerged and then grew in stature it did not appreciate the competition. As te danger it represented grew the Parisian Biennale was forced to renovate. And it was not always easy. The 2014 edition has been hindered by a boody succesion at the head of the National Union of Antique Dealers when the president, Mr. Deydier pushed out of a window for his vision of power was considered too personal. But the organisers of the event assure everyone that the quality of this year's crop will not be affected. In a staging by Jacques Grange, in which Versailles is presented under the glass rotonda of the Grand Palais, there will be the same selection of exceptional works to make up an ephemeral museum. The admission ticket to this one though -30- is much more expensive than that of any other museum. Ancient and modern masters, jewelry, glassworks and metal piecesl, furniture: 88 exhibitors as well as famous chefs. The restaurant on site will be conducted in turn by Guy Martin, Régis Marcon and other great creators.
 27th Biennale des antiquaires, at the Grand Palais, from 11 to 21 Septembre 2014.

Paris, the splendour of the fifties'

Following World War II Paris was a dim shadow of what it had been. Braque, Matisse, Picasso, Soutine, the heros of the previous decades, had all grown old or disappeard. The USA, with Pollock in the lead, were preparing a revolution of abstract expressionismt. Nevertheless, there was one field in which the city seemed stronger than ever, fashion. Ever since the New Look collection in 1947, the great couturier of avenue Montaigne called the cards. But Christian Dior was not alone. In his wake we have Balmain, Jacques Fath, Givenchy who dressed Audrey Hepburn, and the young Pierre Cardin. A beautiful exhibition at the palais Galliera (until 2 November) shows the extraordinary birth of such talents, shown by the mythical models Dovima and Bettina- among others, and was served by great photographers such as Avedon and Henry Clarke.
 Les années 50, la mode en France 1947-1957, Paris Musées, 2014, 260 p., 44.90.

A performer, already seen in various major Biennales around the cord, who uses music and her body in her creations