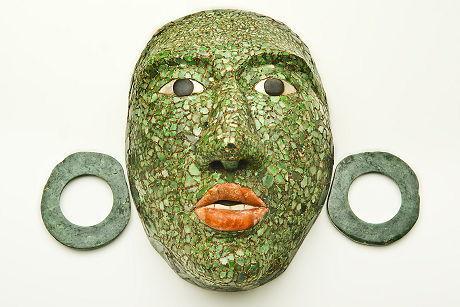 An endless mystery, the end of the Mayas

PARIS  The fall of the Maya cities in Central America during the 9th century remain an obsessive mystery. Was it due to overpopulation, epidemics, draught, wars? A little of all of these? Researchers continue to bring forward various theories, but the myth of the pyramid in ruins, immersed in the jungle, remains unsolved. Yet the Mayas, prior to this brutal fall - and even later, in the case of cities that survived like Mayapán-, left numerous testimonies of an advanced civilization. It produced a writing system, a pantheon, a calendar and a sophisticatd astronomic system. It produced spectacular architecture (Palenque, Tikal, etc.), stone sculptures, jade and turquoise mosaics, ceramics and refined frescoes (Bonampak being the equivalent of the Sixtine Chapel). The musée du quai Branly hosts some 400 pieces from some fourty Mexican museums, while the level of discoveries remains high. Following the frescoes of San Bartolo in Guatemala in 2001, in 2013 the discovery of the great city of Chactun, south of Campeche, which covers 22 hectares, was announced. In spite of having disappeared, the Maya civilization seems more present than ever.
 Mayas, révélations dun temps sans fin at the musée du quai Branly, from 7 October 2014 to 8 February 2015.

VIENNA  The name of this association of artists no longer brings back souvenirs in the Western world. And yet, for nearly four decades, from 1900 to the Anschluss, it played a major role in Vienna in making the avant-gardes famous, in particular through exhibitions carefully prepared. The Vienna Secession and Expressionism owe it a part of their audiences as well as painters from the Mitteleuropa  Checks, Hungarian or Ukrainians, from Lviv to Trieste, which at the beginning of the XXth century were still wrapped up in the huge mosaic of Austria-Hungary.
 Hagenbund, a European network of Modernism, 1900-1938 at the Belvedere, from 11 October 2014 to 1 February 2015.

BERLIN - Laszlo Moholy-Nagy (1885-1926) was an important member of the Bauhaus, and a passionate experimenter of new media: light, electricity, movement. He was very modern in this sense, close to the current movements of digital arts, as well as a source of inspiration regarding the access to the art of handicapped persons. The exhibition brings together works by Moholy-Nagy, and confronts them to creations by current followers such as Olafur Eliasson or Eduardo Kac.
 Sensing the Future, Moholy-Nagy, the Media and the Arts at the Bauhaus-Archiv, from 8 October 2014 to 12 January 2015.

PARIS  The foundation named after him now celebrates its 170th anniversary: since 1844, it follows the same aim, to develop the arts and solidarity between artists. We had somehow even forgotten the figure of its instigator, baron Taylor. Born in Brussels on the year of the French Revolution, he spent his life collecting (he brought together the Spanish Gallery of Louis-Philippe) and championing new ways of protecting national heritage. The Voyages pittoresques et romantiques dans lancienne France, which he published with Charles Nodier, remains a reference. In the exhibition, drawings and paintings cover in detail this adventure which lasted for more than fifty years.
 Le baron Taylor à lavant-garde du romantisme at the fondation Taylor, From 2 October to 15 November 2014.

VILLENEUVE-D'ASCQ Art is produced by artists. No doubt, but how do we define an artist? The question seems innocent but it has brought new answers during the 20th century. The artist is not only a member of the French academy, he can also be the prisoner, the child, the joker. Art brut comes directly from this line of thought: the LAM explores, through 400 works, from Miró to Chaissac, from Gaston Dufour to a great number of anonymous artists, how this revolutionay concept was born.
 Lautre de lart at the LAM, from 3 October 2014 to 11 January 2015.

Erró or the horror vacui

LYON - To fight abundance by abundance! In face of the throngs of images that distinguish our society, Icelandic artist Erró (born in 1932) has decided to mee the challenge by filling his works with contless characters, objects of consumption and Hollywood cliches. It is not a mistake to see this as a sort of contemporary encyclopedia in which the names are treated with a certain mockery due to the fortuitous rapprochement, Mickey Mouse, Kennedy, Superman and Christ. Mao walks on piazza San Marco, Picasso goes into space and Ingres becomes a cosmonaut: periods crash into one another in huge "scapes", which make Erró an actor of the Pop movement from the 60s. The interest of this retrospective is also to show early works and in particular surprising collages of metal objects.
 Erró at the MAC, from 3 October 2014 to 22 February 2015.

PARIS - Africa is in a poor situation: Ebola, fundamentalist and tribal wars, Libya, South Sudan and Central African Republic are sinking into anarchy, aids continues to kill There certainly are areas with unsuspected vitality (Ethiopia has growth rates superior to those of China) but a certain audacity was necessary to suggest an auction dedicated to contemporary African art and not to the traditional primitive masks we will be able to measure the diversity of the current painters and photographers, who don't limit themselves to transmit the legacy of their ancestors but rather to update it (mention of the wealthy materials by Pathy Tshindele, the taste of bright colours by Omar Victor Diop), comment events and criticize corruption (the "black President" by Kudzanai Chiurai), or elaborate daily objects (the thermoses by Pume-Bylex). Next to confirmed artists such as Chéri Samba and Bruly Bouabré, this is an opportunity to make new discoveries, 25 years after Les Magiciens de la terre and 9 years after Africa Remix, two breakthrough exhibitions.
 Art africain at Piasa on 7 October 2014.

Durand-Ruel, the champion of the Impressionists

What do La Femme au perroquet by Courbet, Le Déjeuner des canotiers by Renoir, Delacroix's La Mort de Sardanapale and Monet's Impression, soleil levant have in common? They all went through his galleries and in one of the nearly 330 exhibitions (of which 130 in New York), he organized throughout his long life (1831-1922). He is Paul Durand-Ruel, the son of a paper maker who became an art dealer. "We owe him everything", as Claude Monet wrote gratefully. It is indeed as the dealer of the Impressionists, which he defended hook, line and sinker, that he is known. But the school of Barbizon, Manet or Puvis de Chavannes also owe him a lot. His memoirs are honest and passionate for he does not avoid the financial aspect, and gives an extraordinary panorama of the art market. As an example, Durand-Ruel bought in 1872, for 1500 francs, Manet's le Fifre, which had been rejected by the Salon in 1866. When he wrote his memoirs at the beginning of the 20th century, the painting was hanging at the Louvre and was estimated at more than 200,000 francs Beautifully edited by his descendants, the book includes a complete index, the list of galleries and principal works that went through the hands of Durand-Ruel. We will get a glimpse of it when the exhibition opens at the musée du Luxembourg on 9 October 2014.
 Paul Durand-Ruel, Mémoires du marchand des impressionnistes, présentées et annotées par Paul-Louis et Flavie Durand-Ruel, Flammarion, 2014, 416 p., 32.

War in the work of contemporary artists, from Bryan Adams to Francesco Zizola