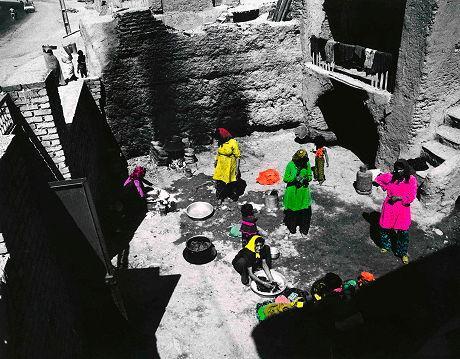 Photo special: is Paris the center of the world?

Its impossible to say precisely how many photographs are taken every year around the world. According to Yahoo! and other experts there are nearly a thousand billion. Thats quite a step forward since traditional cameras were replaced by new digital ones, by cell phones and tablets, with unlimited storage space. Only twenty years ago one would not squander a 36 film nor imagine wasting it on selfies. Abundance does not improve quality; that was proven a long time ago. But we must admit that photography has barged into our daily lives. Hence the growing success of events such as the pioneer Rencontres dArles, the Paris Photo fair (opening this week), and the multiplication of exhibitions and photography books. This year the traditional Mois de la Photo (in Paris, every two years in November), the agenda is remarkable: the catalogue fills a large volume at Actes Sud. And we rest assured that each photograph exposed will in turn be shot 10 or 100 times, enlarging the exaggerated multiplication. Yet, at a time when everyone knows how to take a photo, we cant be so sure we know how to see as well, much less to look, as before. Claudel used to say The eye listens. That should be food for our thoughts, and our practice.

Vishniac, a work on memory

PARIS  His name has come to represent a type of Jewish life gone from Central Europe, in Poland, in Hungary, in Rumania, and even from mysterious Subcarpathian Ruthenia. Roman Vishniac (1897-1990), a Russian Jew, documented the last moments of these communities for the Jewish Joint Distribution Committee. He was imprisoned in 1939 in France in the camp of Ruchard, and finally succeeded at the end of 1940 to reach the USA, where he tried in vain to attract attention to the genocide that was taking place. His emblematic photographs those of the ghettos of Lodz and the Talmud schools of Sata Mare  are part of the exhibition. But they are not alone. Vishniac also produced more optimistic photographs, such as the streets of Berlin in the 1920s, the training camps in the Netherlands for the pioneer Jews on their way to Palestine, the New York jazz clubs in the 40s, real centers of the fight against racial segregation. Even his surprising scientific images of microbes, bacteria and microorganisms, which would become his main activity, show us that maybe he needed to keep faith in life after having witnessed the indescribable.
 Roman Vishniac, de Berlin à New York, 1925-1975, at the Musée dart et dhistoire du Judaïsme, from 17 September 2014 to 25 January 2015.

PARIS  The Centre Pompidou has just inaugurated its Photography Gallery. It had not refrained from showing any until now, but its large collection was mostly shown with paintings or sculptures in a multidisciplinary approach. This additional 200 sq. meter space that will show three exhibitions a years, is opening with the enigmatic Boiffard (1902-1961), the Surrealist master, who gave Breton the photographs for Nadja. But he did more than that. He collaborated with Eli Lotar and Jean Painlevé to do photomontages, left a large number of portraits of his friends Prévert, Bataille, some beautiful nudes of his companion René Jacobi and a curious Géopsychologie de Paris, produced between a trip around the world on a sailboat and a doctorate in medicine. He became a radiologist and died of lung cancer. This greatly needed retrospective had been awaited since his demise.
 Jacques-André Boiffard at the Centre Pompidou, from 5 November 2014 to 2 February 2015.

The Rijksmuseum unfaithful to the old masters

AMSTERDAM  The Rijksmuseum is known for its Rembrandt and Vermeers, much less for its collection of photographs. Yet it owns 130 000 prints of which 20 000 accumulated over the last twenty years date from the 20th century. While it recently adopted a revolutionary stance regarding the free reproduction of its old masters paintings, it presents in the renovated Phillips wing a selection of 400 pieces, from the Parisian avant-gardes (Brassaï, Man Ray) up to the contemporary creators.
 Modern Times, photography in the 20th century at the Rijksmuseum, from 1 November 2014 to 11 January 2015.

LONDON  Edward Steichen (1879-1973) is especially known for the unforgettable exhibition he produced in 1955, The Family of Man. It was first shown at the MoMA, and then traveled the world over. Throughout his long career, Steichen was a talented portrait artist but he also excelled in the world of fashion. That is the aspect of his activity which this exhibition explores: nearly fifteen years (1923-37) during which he was chief photographer at Condé Nast (editor of Vogue and Vanity Fair) and during which he helped define the codes of fashion photography.
 Steichen, the Condé Nast Years at the Photographers Gallery, from 31 October 2014 to 18 January 2015.

NOT TO BE MISSED DURING THE MOIS DE LA PHOTO

 Michael Kenna is a virtuoso of black and white photography. He gives his dreamlike, light sensitive vision of Paris, in which bridges, chestnut trees and monuments emerge from a smooth light. At the Musée Carnavalet, from 28 October 2014 to 1 February 2015.

 Carlos Cruz-Diez, a patriarch in kinetic art, unveils at the age of 92 an unknown aspect of his work: his photographs. An itinerary over 50 years long, spanning from the religious celebrations in his native Venezuela up to the portraits of his artistic companions in Paris (Soto or Tinguely). At la Maison de lAmérique latine, from 5 November 2014 to 31 January 2015.

 Finnish artist Tuija Lindström became famous through her images of nude women in a pond. She settled in Sweden a long time ago and also explores the themes of landscapes or of still-life. This exhibition shows her work from the 1980s. At the Institut suédois, from 14 November 2014 to 18 January 2015.

 Regards croisés shows the close relationship between theatre and photography ever since the latter was invented. Aside from the photos of famous actors some one hundred years ago (among which Sarah Bernhardt), there is also a beautiful ensemble taken by Agnès Varda at the Festival dAvignon in 1954-55, with close-ups of Gérard Philipe, Daniel Sorano and Philippe Noiret. At la Maison de Victor Hugo, from 6 November 2014 to 1 March 2015.

 Roger Ballen, known for his heart-gripping documentary photographs of South Africa where he lived for thirty years, offers in his latest series "Asylum of the birds" a strange universe, with a Surrealist spirit, in which man and bird live together. At the galerie Karsten Greve, from 8 November 2014 to 3 January 2015.

 Japanese photographer Yuriko Takagi penetrated the intimacy of flowers, in black and white. Just like Weston or Blossfeldt before her, she finds surprising forms and sometimes troubling analogies with the human body. At the galerie Lazarew, from 14 November to 20 December 2014.

 While she is particularly known for her images of flamenco and bullfights, Isabel Muñoz has many other talents, from the maras of Central America to the whirling dervishes. She likes using demanding techniques such as work with platinum and iron salts, she presents an ensemble on a mineral version of the Mediterranean. At the Institut Cervantes, from 14 November 2014 to 17 January 2015.

 It is the great return of anonymous photographers: the Photos trouvées (Found photographs), done in this case during the XXth century, which enthrall a growing number of amateurs. The magic of this genre is that the authors or characters taken are unknown but the scenes and the atmospheres touch the public. At la Maison de la photographie Robert Doisneau (Gentilly), from 24 October 2014 to 25 January 2015.

Man Ray is back

PARIS  In 1995, a large Man Ray (1890-1976) auction had been orchestrated by his estate. Nearly twenty years later, Sothebys repeats the event with another series of works from the artists workshop: 300 lots including of course photographs, but not only. There are also drawings (in particular portraits of his wife Juliet or the charcoal shadow drawings), Surrealist paintings and objects (empty iron, phallic-shaped paper weight, etc.), his Imaginary portrait of marquis de Sade or a project for a record cover for the Rolling Stones. In 2012, Man Rays value had jumped to 660 000 euros with a solarised portrait of Meret Oppenheim that dates back to 1929. Nothing of that importance is expected in this auction, and it may be an oil painting (Much Ado About Nothing) that could go for the highest bid, as it is currently estimated at 60 000).
 Man Ray at Sothebys on 15 November 2014.

We all know the famous formula of Paris Match, The weight of words and especially the shock of photographs. The magazine has honoured it for over sixty years. Wars, catastrophes and love stories have filled the cover page of its nearly 3000 issues. These two volumes drew from the magazines abundant archives to present an idea of the art aspect which was opened since the first issue on 23 March 1949 with a report at Raoul Dufys workshop. Here we see Matisse painting with a pole from his bed, Salvador Dalí in a surrealist staging at the seaside, Balthus at the age of 90, when he allowed a journalist to enter his home for the first time! But we also see Derain and Vlaminck who meet after being mad at each other for 40 years, Poliakoff stepping out of his Rolls Royce, Van Dongen with Bardot, Chagall under the ceiling of the Paris Opéra, Bernard Buffet in a disorder of giant dragonflies. Certain portraits have gone down in History, others, as they are pulled out of the cartons seem practically new. Unfortunately, the names of the photographers are only partially mentioned.
 Portraits dartistes, coffer with 2 volumes (Dans lintimité des peintres ; Les écrivains, portraits intimes) published separately in 2011 and 2012, Glénat, 2014, 416 p., 45.

How to save the fingerprints of influential artists on wood