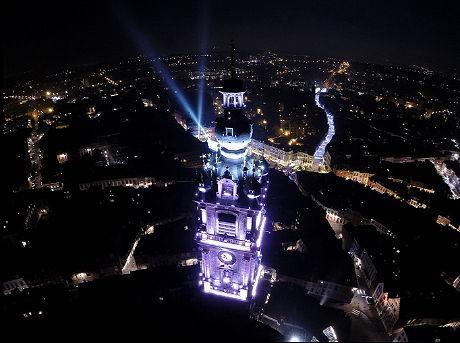 Mons, a certain idea of Europe

MONS (Belgium) Figures speak for themselves: 300 events all along the year (of which some twenty ambitious exhibitions dedicated to Verlaine or to monumental Chinese sculptures), the creation of five new museums, hundreds of thousands of visitors expected. Mons, the 2015 European cultural capital (together with Plzen in the Czeck Republic) intends to create a greater commotion than its predecessors  Riga and Umea -did in 2014. The beginning of the festivities, programmed for 24 January with the whole town staged by artists, is partially spoiled by the Passenger affair. This impressive wooden structure by Arne Quinze had to be dismounted after it began to fall apart. Fortunately, the other major media attracting event, the «Van Gogh au Borinage» exhibition, the detailed presentation of the painters founding story in the mine region affected by poverty should suffer no delay.
 The opening ceremony of Mons 2015 will be held on 24 January 2015. The exhibition Van Gogh au Borinage will take place from 25 January to 17 May 2015.

MUNICH  This is the story of a friendship that only lasted four years but which has echoed on in the history of art. It brought together two young artists, Franz Marc and August Macke, one from Munich, the other from Bonn, both lovers of light and colour. The end of the friendship is not due to eithers impetuous personality, but rather to the war which took Macke in 1914, in the Champagne region, and his friend Marc in 1916, at Verdun. They nevertheless had the time to give the Blue Rider movement the breadth it needed and to spend the spring of 1914 in Tunisia, which as History would decide, would be their farewell. Their story is shown here through some 200 works that trace their itinerary: this is also the opportunity to discover the collections of the Lenbachhaus which recently reopened following the addition of a new wing in 2013, with masterpieces by Kandinsky, Gabriele Munter and the German New Objectivity of the thirties.
 August Macke and Franz Marc, an artistic friendship at the Lenbachhaus, from 28 January to 3 May 2015.

Anne Gorouben: the scent of absence

Her family life is one of the grids of her work, both written and drawn: that of the Jews of central Europe, hunted down, and exterminated, or survivors of the Shoah through a clandestine life. With all the memory and identity problems this implies. Hence the tender and slightly confused look  as if due to the distance or to tears  which she gives her drawings by using a pencil or pastels, her favourite techniques. Anne Gorouben (born in 1959), works by cycles, in her workshop or in cafés, these hybrid spaces of encounters and contemplation. She focused on Odessa, a very important spot for Jewish memory and a mythical city of enlightened cosmopolitism, on Kafka and Paul Celan, as well as her cats death  another fragment of humanity.
 Anne Gorouben takes part in the exhibition of the Cahiers dessinés at the Halle Saint-Pierre, from 21 January to 14 August 2015, with her series Le Bonheur familial.

PARIS  Priceless paintings, very expensive drawings ... If one wants substitutes that are less expensive, why not look at artists books? This is the opportunity to have a Braque, a Picasso, a Miró at discount prices. Of course these are only multiple copies but the pleasure of the image (reproduced in very few copies) is accompanied by the one of reading an often original text printed on beautiful paper. For example, will the Traité des excitants modernes, by Balzac with its eight etchings by Alechinsky help us at all during these morose times (3000). The hero of the sale is Pierre-André Benoît (1921-1993), the dear friend of René Char, whose works are mostly kept at his home at Alès. This is his personal collection where he appears successively- and sometimes simultaneously  as editor, illustrator, poet. His companions are called Dubuffet, Eluard, Hérold, Picabia. Surprises such as these Dessins visagés by Michel Seuphor, these Quatre chansons et déchansons by Tristan Tzara, or even the Round Midnight by Henri Kréa, illustrated by Gianni Bertini, will be bought for a few hundred euros. But who is interested in poetry today?
 Collection Pierre-André Benoït, at Tajan, on 23 January

Drawings seemed, like poetry, to be an element without importance in a world full of animations and special effects, and suddenly it finds itself, following a tragic event, to be a factor capable of mobilising the crowds and triggering off passions, especially hate. Who woud have believed it? The large exhibition of 700 drawings (from the beginning of the XIXth century to our day) at the Halle Saint-Pierre, in Paris, is a happy coincidence. It shows the power that is no longer dormant, of this medium, capable of being erotic, afraid, absurd and blasphemous (can we still use the word?) From Victor Hugo to Tomi Ungerer, from Vallotton to Topor, the retrospective that lasts until 14 August 2015 and the compendium that accompanies it, include the least known and the youngest, and a quantity of discoveries. There are the hallucinating architectures of Frédéric Lonné (1910-1989), the outrage of Pierre Fournier (who died at the age of 36 in 1973). Or the perfect views of Bourges by Marcel Bascoulard (1913-1978), who wandered for years throughout his town, dressed as a woman, with a heavy secret (the murder of his father by his mother) before he ended up murdered in a truck in an empty lot. One could almost think that drawings are explosive matter
 Le cahier dessiné, directed by Frédéric Pajak, January 2015, n°10, 432 p., 39.

BRUSSELS - The Brafa, a fair focusing on ancient art, is being held from 24 January to 1 February 2015.

BRUSSELS - BRUNEAF, the fair specialised in primitive art, is being held from 22 to 25 January 2015.

PARIS - On 16 January 2015 the Gustave Moreau museum inaugurated its renovated rooms on the ground floor and the graphic art cabinet.

PARIS - The JIFA festival dedicated to art movies will be held from 28 January to 1 February 2015 at the Louvre museum.