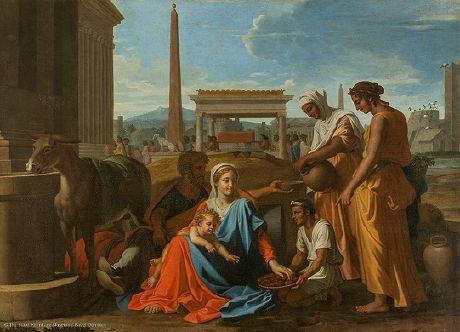 Poussin against the fanatics

PARIS  This is undoubtedly a daring exhibit. It brings together a painter known for being "difficult" (Poussin) and a subject that will not please everyone (religion). Of course there will be assumptions, suppers and extasies, as well as Saints in in rather uncomfortable situations (such as the large Saint Erasmus brought in from the Vatican whose intestine is rolled out on a cabestan). But the exhibit also suggests a second reading, that of a Poussin, whose exégètes often wonder whether he was a non-believer or a devoted Christian, offering a form of open, peaceful and enlightened religion. As long as we believe in a comparable version of Humanity, the gift of oneself, the veneration of the good deeds of Nature, in which characters as varied as Diogenus or the Greek strategist Phocion could be included. The exhibition includes works from the very rich collection of the Louvre (the "museum with forty Poussin"), las well as works rarely seen or recently rediscovered such as the Death of the Virgin from the church of Sterrebeek in Belgium or the Landscape with three monks from Belgrade.
 Poussin et Dieu at the musée du Louvre, from 2 April to 25 June 2015.

Life as a model

PARIS  Coming from the Fitzwilliam Museum in Cambridge, this is undoubtedly one of the most surprising exhibitions of the year: the use by artists over centuries of wooden mannequins or cloth models. The theme is not as frivolous as it seems. Pygmalion taught us that those make-believes could become more real than life itself. The exhibit reminds us in particular, through photographs, the extraordinary story of Oskar Kokoschka's doll: the artist had been left broken hearted by Alma Mahler, and had her brought back to life by a seamstress. He had this substitute Alma dressed up, went out with her into town, slept with her until one day he cut off her head. Between paintings by Burne-Jones and de Chirico, photos by Herbert List and Bellmer, films by Méliès, we drift from glass eyes to unbelievable wax complexions. The exhibit places us in a delightful "cabinet de curiosités": we discover Edison's talking dolls - a real commercial flop - or the reconstitution of the "great machine" by Nicolas Poussin, his theatre of figurines in a wooden box. On nights with a full moon, one can imagine all these wise mechanisms coming to life.
 Mannequin d'artiste at the musée Bourdelle (which just reopened), from 1st April to 12 July 2015.

The ocean spray in Flanders

CASSEL  It is no secret that Flanders has counts to settle with the sea. This exhibition traces those centuries of close relations symbolized by seascapes. Sea battles, storms at sea, as well as scenes of the ports, full of animation, still lives with fish. Major institutions granted significant loans allowing the public to admire works by Bruegel the elder, Met de Bles, Frans Snyders or Paul Bril.
 La Flandre et la mer at the musée de Cassel, from 4 April to 12 July 2015.

PARIS - The title spans a wide subject, the fondation Louis Vuitton presents a general exhibition in search of the sources of modernity. Based on prestigious loans from great museums, it reviews painters that have gone down in History, from Munch to Otto Dix, from Matisse to Mondrian.
 Les clés dune passion at Fondation Louis Vuitton, from 1st April to 6 July 2015.

PARIS  He was one of the "enfants terribles" of fashion in the 80s. Gaultier has learned to behave since, but he remains one of the major influences as this retrospective proves. It groups together his creations since 1970, when he began drawing influenced by Jacques Becker's movie Falbalas, until 2013.
 Jean-Paul Gaultie at the Grand Palais, from 1 April to 3 August 2015.

In the intimacy of the Rouart family

YERRES - Henri Rouart (1833-1912) was a talented Impressionist painter, present since the first exhibition 1874, as well as an ardent collector: his industrial successes gave him the means to buy without counting. His descendants Ernest (a student o Degas and the son-in-law of Berthe Morisot) and Augustin were also gifted painters. The dynasty is not very present in the museums but their works still hang on the family walls, among them those of the Jean-Marie Rouart, a member of the French Academy. To see them brought together in the former property of their friend Caillebotte is a rare opportunity
 Les Rouart : de limpressionnisme au réalisme magique at the Propriété Caillebotte, from 28 March to 5 July 2015.

In 1960, Greek artist Takis took over the gallery of another Greek, Iris Clert, at Saint-Germain-des-Prés, where Yves Klein had just presented his Vide. In turn he too made the headlines by sending a man into space. Actually, it was a short flight, since the guinea pig with a helmet was simply South African poet Sinclair Beiles, and he only took off a few inches from the ground. But he was moved by magnetic fields and Takis (nor in 1925) would continue to explore them up to our day. Like for Julio Le Parc whose recent exhibit at the Palais du Tokyo with his surprising installations, this exhibit too covers the whole career of a major artist of the last half a century, Desperate compasses manipulated by the visitors to unpredictable gongs, guitar strings pinched by wild sticks and the major Hommage à Kafka, an erotic and technological nightmare: Takis never ceased intertwining science, music and esotericism.
 Takis, champs magnétiques at the Palais de Tokyo, from 18 February to 17 May 2015.

A genius in forgery

His case had made the headlines a few years ago. Mark Landis had flooded the museums of the South of the USA with fake works by Signac, Valtat and Picasso. Orson Welles, whose last movie F for Fake was on counterfeiter Elmer de Hory, would have liked this most un-ordinary story: the guilty man did not seek wealth but his act was actually that of a philanthropist. He presented himself under various identities - a heir seeking to honor his parents' memory or a wealthy pastor -, he would give the paintings away. As the fake paintings were not paid for, there was no penal crime. The museums that are tricked with works based on digital photocopies and coffee dredges did not wish for their naiveté to be showed out to the world. But a curator noticed the watercolor by Signac generously offered to the museum of Cincinnati already existed in two or three neighboring museums. This was the first knot he undid in this wild affair. What could be unbelievable -once again- happened, as the guilty counterfeiter collaborated with the producers. In this movie he tells the story, a rather moving one with a cocktail based on schizophrenia and family mournings. The movie shows, by the way, how sophisticated analysis techniques do not make curators infaillible
 Le Faussaire (original title: Art & Craft) by Sam Cullman and Jennifer Grausman, in the movie theaters on 18 March 2015.

Focusing the lens on writers

Some of them are mysterious and shy away such as Salinger or Henry Roth, others are icons such as Malraux, Henry Miller or Nabokov, but at one moment or other they all attracted attention - or an obsession - from and among photographers. The work, in the form of huge vademecum, presents 250 portraits of famous writers. from Achebe to Zanzotto, signed by Herbert List, Sophie Bassouls or Marion Ettlinger. The texts  mini biographies - are imaginative even though the translation from the Italian plays certain tricks. For example, Cavafy (written Kavafis in Italian) finds himself between Kafka eand Kawabata We regret certain absences such as Chekhov or Tolstoï, we would have like to have more details on certain photographs. Proust on his death bed by Man Ray, Sartre with his pipe on the Pont des Arts by Cartier-Bresson, or Nabokov catching a butterfly with a net by Philippe Halsman have become such classics that they each deserved a little essay.
 Grands écrivains. Les auteurs célèbres vus par de grands photographes, éditions du Chêne, 2014, 512 p., 35.

The use of mannequins by a contemporary artist, as an echo to the exhibition at Musée Bourdelle

MALAGA - The Centre Pompidou Malaga has been inaugurated on 28 March 2015.