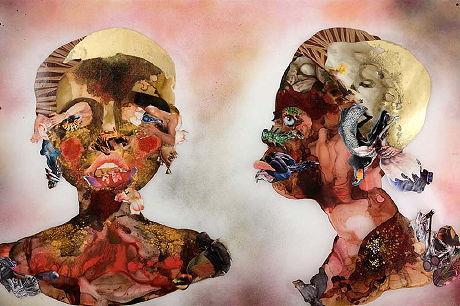 Gondolas and the Mosque in Venice

VENICE  The Biennale of Venice, well into its third century is was born in 1895- and now at its 56th edition, is more than ever the event that federates contemporary art. Provocation, iconoclasm, counterweight are the rule. Among the 88 national participations and the hundreds of peripheral exhibitions, one of the events that will undoubtedly cause the greatest buzz will come from Iceland: artist Christoph Büchel has set up a mosque in the unconsecrated church of Santa Maria della Misericordia. The site is meant to be used as a place to discuss and exchange ideas. But its future doesn't seem very definite given these times of religious rigidity. The existence of a traditional gondola seems less risky. Artist Cristiano Carotti has equipped it with a cannon: does it show its desperate resistance to the laws of the market or the fear of a growing militarization of the world? Among all the inaugurations, two absences will hardly be noted. The first, Costa Rica, cancelled its participation when it learned the independent curator was paid according to the artists he selected. There is nothing really shocking in our capitalist economy: how else could the elegant Palazzo Bollani be rented? The second country, Kenya, realized a little late that most of the artists in its pavilion were mostly Chinese. A lot to do about nothing, arent we in times of globalization?
 56e Biennale internazionale darte, All The Worlds Futures, directed by Okwui Enwezor, from 9 May to 22 November 2015.

Canaletto, the ambassador of the Serenissima

AIX-EN-PROVENCE  This town in Provence is known for its Baroque homes. One of the most extraordinary of them, of which the first stone was placed exactly 300 years ago, has just been restored to change its mission. A former municipal music conservatory, the hôtel de Caumont has become an art center managed by Culturespaces, like the musée Jacquemart-André in Paris or Villa Kérylos in Beaulieu-sur-Mer. Most of its program will be made up of forums, movie cycles and exhibitions. Charming Canaletto (1697-1768) is a perfect crowd pleaser: he was a contemporary of the venue and synthesizes a European vision before its time. He worked in his native city, Venice, and contributed to diffuse images of it in and out of the city, as well as in England, and shifted with ease from the canals to the castles and abbeys of humid prairies.
 Canaletto, Rome, Londres, Venise, le triomphe de la lumière at the hôtel de Caumont, from 6 May to 13 September 2015.

MILANO  A week after the opening of Expo 2015, the Prada Foundation inaugurates its new headquarters in a spectacular venue: a former distillery renovated by the OMA agency directed by whimsical Rem Koolhaas. The space is large, 19 000 m2, including the Bar Luce designed by movie director Wes Anderson and aimed at becoming the place to be in the Lombardy capital. Nearly 11 000 m2 are dedicated to exhibition space, which will allow it to present various exhibits simultaneously. For the opening, the most original is undoubtedly the one with the funny title Serial Classic. What is surprising in a house known for its relationship with contemporary art, it delves into the influence of major classic statuary: what is the destiny of the lost masterpieces? How did they live on through the centuries through copies? The demonstration is made with some sixty works that illustrate two archetypes in particular, the Discobolus and the Crouching Aphrodite.
 Serial Classic at the Fondazione Prada, from 9 May to 24 August 2015.

MONZA  Italy is very much in fashion, lets enjoy it! In the setting of the former royal villa near Milano, five centuries of the attraction the Peninsula has exerted are traced. From Cranach to Ingres and Christo, a great number of artists from the North and the East nourished themselves here on the Antiquity and the Renaissance, drawing monuments, landscapes and genre scenes. Some of them came through here very quickly or didnt even come at all, like Cranach. Others on the contrary, like French artists Poussin and Claude or Danish artist Thorvaldsen, spent a major part of their careers here. This grouping together of lovers of Italy required constant transportation, since most of the works were brought from abroad, from Lichtenstein, Budapest, the Louvre or the Dalí museum in Figueras.
 Italia, fascino e mito, dal Cinquecento al contemporaneo, at Villa Reale, from 23 April to 6 September 2015.

VIENNA  Like Frida Kahlo, Tina Modotti or Georgia OKeffe, Lee Miller (1907-1977) is one of the strong women of XXth century art. The latter almost forgot her, or neglected her. She was a model in New York in the twenties, then the muse of the Parisian avant-gardes, in particular of her lover Man Ray, with whom she invented the solarization technique, and she was also known as a reporter. She was one of the first women to enter the camp of Dachau once it was liberated and she left a symbolic photograph of the Liberation, of herself taking a bath in Hitlers bathtub. She married Roland Penrose, the friend and biographer of Picasso, and the second half of her life was less glamourous. She retired to the English countryside, took up drinking, dropped photography and developed a misanthropy which the horrors of her time could well justify. Her fund was only discovered after her death and it has been the fodder for many an exhibition. This current one shows all of her work, logically leaving an important place to the photos taken in Vienna in 1945.
 Lee Miller at the Albertina, from 8 May to 16 August 2015.

ROQUEBRUNE-CAP MARTIN  Independently from the large exhibition on Le Corbusier at the Centre Pompidou, a remarkable group of modern architecture is finally opening to the public after a long and complicated history. As we all know Le Corbusier drowned in 1965, right in the waters facing the 3.60 m over 3.60 m cabanon he had built for himself and where he lived during the summer. The dwelling almost leaned against the mythical villa E-1027 built and furnished between 1926 and 1929 by designer Eileen Gray for her companion Jean Badovici. While the mysterious name is linked to the couples initials, the building is made according to the teachings of the modern movement (roof like a terrace, horizontal windows, etc.). Le Corbusier was invited and covered it with frescoes without the owners authorization as if to note his discontent in having his ideas copied. This caused a definite dispute with Eileen Gray. Following many events- including the assassination in 1996 of a morphine addict, Swiss doctor Peter Kägi  the villa was finally restored under the guidance of the Conservatoire du littoral, as well as the camping units designed by Le Corbusier and the Etoile de Mer, the neighboring typical guinguette owned by plumber roofer Thomas Rebutato.
 Visits of the site may be reserved with the Cap moderne association as of 3 May 2015 (contact@capmoderne.com).

Devotion in the XVIIth century

In our times of skepticism, who could recite the Hail Mary without hesiating? Who is still capable of making the difference between Pierre de Bérulle and François de Sales? O tempora o mores! As the catalogue that accompanies an exhibition at the Louvre shows, things were quite different during the XVIIth century. Implulsed by the Counter-Reformation, the sense of religion was at the heart of people's concerns. New congregations such as the Oratoire did everything to stimulate it, and the best artists were asked to illustrate the new themes in fashion  the life of the Virgin, the last Supper, the Eucharist. The authors show the rich but critical relation between Rome (a more theatrical idea of religion) and Paris (a more austere expression, marked by the Reformation). They review some of the major characters and key moments, from Guido Reni to Philippe de Champaigne, from Le Sueur to the Le Nain brothers, reminding the reader of these forgotten traditions. Like the famous "Mays" of Notre-Dame: each May 1st, from 1630 to 1707, the corporation of jewelers offered the cathedral of Paris a painting dedicated to the Virgin, and not a bouquet of lilies of the valley. The investigation continues since one third of the compositions have been scattered or destroyed.
 La fabrique des saintes images, directed by Louis Frank and Philippe Malgouyres, Somogy/Louvre éditions, 288 p., 35.

An ill-known ethnographic collection belonging to the Jesuits in Belgium

BRUSSELS - Writer, art historian and comic strip specialist Pierre Sterckx passed away on 2 May 2015 at the age of 79.

FONTAINEBLEAU - The Turkish boudoir of Marie-Antoinette, a testimony of the Oriental fashion during the XVIIIth century, will open again to the public on 11 May 2015 after all its decorations have been restored.

GRASSE - The Fragonard villa-museum opened again to the public on 24 April 2015 after 18 months of renovation works.

TAIPEI  The modern and contemporary art fair, Art Revolution, will be held from 7 to 11 May 2015.