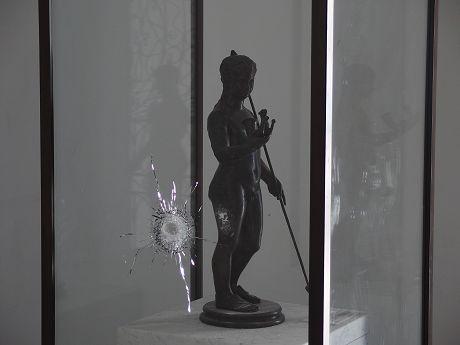 The impact from the bullets shot by the terrorists on 18 March this year on the glass of one of the display cases. Bardo museum. (photo R. Pic, 13 May).

Return to the Bardo

TUNIS  The terrorist attack against the Bardo museum, in which 22 tourists died last 18 March, had caused an international commotion. As we are constantly solicited by the most recent events  such as the earthquake in Nepal or the ISIS arrival at Palmyra  the events in Tunis almost seem like ancient history. And yet the effects will undoubtedly last for a long time. Attendance in the former palace of the Bey, a museum since 1888 and entirely renovated in 2012, which holds some of the most famous mosaics of the Roman world - the Triumph of Neptune or Virgil writing the Aeneid), - has gone down drastically. Foreigners havent only abandoned the beaches. The medina has also been affected while reasons for visits continue to flourish: the patrimony continues to be restored (recently honored by an Aga Khan Award for Architecture) while Dar Bayram, the former palace of the grand mufti, refurbished to its state in the XVIIIth century with its impressive collection of Iznik tiles, has just been inaugurated as a luxury hotel. In the past an ad recommended to Read while you suntan. Here are new opportunities to turn travel and museums visits into an act of citizenship.

The restoration of the Bayram palace

Van Gogh to the last note

AMSTERDAM  For some, Van Gogh was as much a powerful writer as he was a revolutionary painter. The collection of the 800 letters he exchanged with his brother Theo has legitimately inspired curator and artist Henk Schut, who submitted a selection of 23 to contemporary creators for them to draw inspiration from them as well. The usual participants to large international events are included, such as Anish Kapoor or Jan Fabre. But we also see writer Nicole Krauss, who was greatly moved by the artists anguish when facing the white canvas. One hundred and twenty five years after his demise, Van Goghs traits of character, his fears and his passions are seen under the light of artists who never met him: his solitude (Alicia Framis), his appetite for literature (Job Koelewijn), his taste for complementary colors (Viviane Sassen) or his love for the moon (Simon van Til). After all, was he not a lunatic?
 When I give, I give myself at the Van Gogh Museum, from 20 May 2015 to 17 January 2016.

The artist in face of the future

MARSEILLE  Progress (expressed by mechanics or science-fiction) clearly fascinated artists like Fernand Léger or Max Ernst. But not only them! Even creators like Matisse or Miró, who we consider less drawn-in by the religion of the future succumbed in their own way. It is what this stimulating exhibit aims to show. It calls in the champions of the XXth century (from Kandinsky to Raysse) to demonstrate this theory in three sections (Metropolis, The War of the Worlds, Space Odyssey.)
 Futurs at la Vieille Charité, from 22 May to 22 September 2015.

PARIS  It took six years to build the Sainte Chapelle, so many more to restore it. It is true that it is an iconic work of art that has lived through the centuries. Saint Louis wanted it built to hold the highly paid relics of the Lord's passion, including the crown of thorns (135 000 pounds, three times the cost of the building itself!). It was built between 1242 and 1248. Following a long thirty-year restoration during the XIXth century, a new campaign that started in 2008 and was partly financed by the company Velux is coming to an end. It concerned all the glass windows on the North aisle and the Western rose, that is, half of the 1113 scenes represented. The rose was entirely removed and put back into place. The art restorers were surprised to find that 78 of the 87 panels were the original ones. To fight air pollution, a double-glass was set up that helps avoid the over-use of sealing products on the lead to make them waterproof. The objective now is to reach its first millennium in full shape.
 From 20 to 23 May 2015, night visits to the Sainte Chapelle are free of cost.

PARIS  I am French and I hate extravagancies Patou confided to the Washington Post in 1923, when, not even 40 years old, he was glorified in the USA. All that we remember of this young creator (1887-1936), a contemporary of Chanel and Poiret, is his mythical perfume, Joy. Yet, this forerunner of prêt-à-porter and of eventful podiums, who imported the first top models from New York and invented the first suntan oil, found time to be a collector. The sale of his family fortune brings out some of these models, such as the tomboy sweaters or the Black and White evening dress, as well as his furniture designed by Süe and Mare, a sensual bronze by Maillol or his secret garden, autographs. Here we will see manuscripts by Bossuet, Colette or Proust, but most important the wealthy correspondence between La Fayette and his companions during the war of Independence. No doubt the Americans will continue to show their interest in the one they called the most elegant man in Europe.
 Jean Patou, couturier, bibliophile et collectionneur on 22 May 2015 at the hôtel Drouot (Pierre Bergé et Associés).

Proust: a passion for Ruskin

On one side we have the sickly dandy who revolutionized literature, on the other the Gothic Renaissance paladin and great defender of the Preraphaelites. Their language and times separate them: John Ruskin died in 1900, at the time young Proust developed a passion for his writings, which he discovered as early as 1893 in the Bulletin de lUnion pour laction morale). But they are united by so many shared ideas that an exegete saw Ruskin as Proust's "prophet", foreshadowing a number of themes, from the taste for painting to the "culturel" trip, from the central role of memory to the dislike for sports. It was only natural then that Proust push that passion so far as to translate two works of the British writer, The Bible of Amiens, on the famous cathedral, and Sesame and Lilies, an ode to reading. The scholarly notes allow the reader to draw the links between the two men, showing in detail their shared passion for hawthorn or for Rembrandt, and underlining Proust's quest for perfection. Proust the translater took his work very seriously, writing to famous specialists, such as professor Emile Picot from the School of Oriental languages, to ask him about the etymology of the city of Eisenach.
 Proust Ruskin, edition set up by Jérôme Bastianelli, collection Bouquins, Robert Laffont, 1024 p., 30.

BRUGES  The Triennale of Contemporay art (Triannale dart contemporain) will be held from 20 May to 18 October 2015.

A Belgian painter, formerly member of Abstraction Création, to rediscover