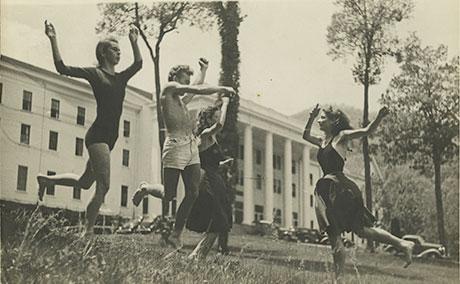 The secret of Black Mountain

BERLIN  What did composer John Cage, choreographer Merce Cunningham, movie director Arthur Penn, architect Buckminster Fuller, artists Robert Rauschenberg and Cy Twombly, and even Albert Einstein have in common? They all studied or taught at Black Mountain College, a university founded in 1933 in North Carolina, in the heart of the Craggy Mountains, very near  and this is no jokeEden lake. The focus was on pluridisciplinarity, democracy, artistic performance, the communal spirit. To learn architecture, students studied their manuals but then took hammer and nails in hand and built a barn or a library, and then discussed the results while sipping a drink and talking with Walter Gropius. In spite of its short life the college closed in 1957 due to budget problems- the experience at Black Mountain deeply influenced creation during the post war years. At a time where a new debate on education is simmering in France, this adventure could remind one and all the importance of unusual experiences to nourish and foster education.
 Black Mountain. An Interdisciplinary Experiment 1933  1957 at the Hamburger Bahnhof, from 5 June to 27 September 2015.

Lapis-lazuli, a certain idea of blue

FLORENCE  A stone that came from faraway Afghanistan. During the Renaissance, it was not easy to find the famous lapis-lazuli or the ultramarine, an ingredient that was indispensable for painters who crushed it to powder before extracting the most intense blue. Given its rock quality, lapis-lazuli was also used in decorative arts: the court of the Medici had one of the most beautiful collections in the world. Here it is used as the nucleus of an ambitious assembly that ends with Yves Klein.
 Lapislazzuli, magia del blu at the Museo degli Argenti, from 9 June to 11 October 2015.

PARIS  Many people believed she died in the forties as he career is so strongly linked to the period between the two wars. Yet Germaine Krull, born in 1897 at Poznan, lived until 1985, hidden in Asia where she became a practicing Buddhist. Her most emblematic works concern large steel architecture structures, like the Eiffel Tower and her audacious low angle shots or the mythical transporter bridge in Marseille. Actually, as can be seen in these nearly 120 images, she produced a lot more: nudes that were sometimes daring, a photo-novel with Simenon, La Folle dItteville, views of Paris, investigations on societys marginal elements, ads for Paul Poiret and the great couturiers of her time, Surrealist collages and portraits of celebrities. She continued to have a very rich and adventure-filled life: she had an abortion at age 16, long affairs with Joris Ivens and Eli Lotar, was imprisoned at the Loubianka prison in Moscow, the photographer for France libre in Brazzaville, the manager of the Oriental Hotel in Bangkok, to mention but a few.
 Germaine Krull (1897-1985) at the Jeu de paume, from 2 June to 27 September 2015.

PARIS Henry Darger (1892-1973) was certainly a strange character. Today his works are shattering outsider art records in public auctions. He was an orphan, was placed in a psychiatric hospital from which he escaped and survived in Chicago by doing odd jobs in the citys hospitals. He did not mind for his greatest work was hidden away in his little apartment: a 15 000 page novel and thousands of drawings that tell the bloody story of the Kingdoms of the unreal: the revolt of children in face of their sadistic oppressors. The musée dArt moderne de la Ville de Paris, which benefitted from a rich donation (45 works from the widow of photographer Nathan Lerner), has enriched it with external loans, in particular from the MoMA and the Collection de l'Art brut in Lausanne, to trace the portrait of a modest government employee with an endless internal world.
 Henry Darger at the musée dArt moderne, from 29 May to 11 October 2015.

BORDEAUX  There is a word that sticks well to this Franco-Chilean cosmopolitan traveler, of Ukrainian Jewish origin, born in 1929 in the desert of Atacama, who lived a long time in Mexico and today is based in France. He is unclassifiable. He is a specialist of tarot cards which he decyphers in Parisian cafés, he writes scripts for cartoon strips, performs with Topirs group Panique, is a writer and a movie director. We dont really know what angle to choose to look at this jack-of-all-trades. Used to being underground, he pops up at regular intervals and meets massive success: with the cartoon strip LIncal (drawn by Moebius) or, more recently, with his autobiographical movie La Danza de la realidad. It is difficult to dedicate a retrospective to this unusual personality. The CAPC has tried by giving him its nave, divided into 22 arcanes and presenting increasingly secret gardens, such as his drawings -collages of Fábulas Pánicas.
 Alejandro Jodorowsky at the CAPC, from 28 May to 31 October 2015.

A very personal vision of the golden age of cinema

He was a major deity in art history, but in the long run is hardly known. Aby Warburg (1866-1929), the heir of Jewish ship-owners from Hamburg, decided to dedicate his life to knowledge, and through an almost biblical agreement his brothers financed him throughout his life. After Emile Mâle, he re-founded iconology, accumulated a senseless amount of knowledge and images which he tried to classify through selective affinities, something like an atlas of the creation. In passing he demonstrated that the major artists were those who, like Rembrandt, succeed in pulling away from the burden of tradition. He was marked by psychic troubles revealed during a stay with the Navajos, a lover of the Italian Renaissance, a fine connoisseur of astrology, his greatest work is actually his library. It was first housed in his apartment in Hamburg, then immigrated to London during the rise of the Nazis and would give birth to the famous Warburg Institute. This biography is written by one of its most famous directors and until now had not been published in French.
 Aby Warburg. Une biographie intellectuelle, by Ernst Gombrich, translated and presented by Lucien dAzay, Klincksieck, 2015, 500p., 33.

BARCELONA  The Loop video art festival will be held until 6 June 2015.

SOUVIGNY (Allier)  The funerary chapel of duc Louis II de Bourbon (1337-1410), has been opened again to the public folloiwng its refurbishment.