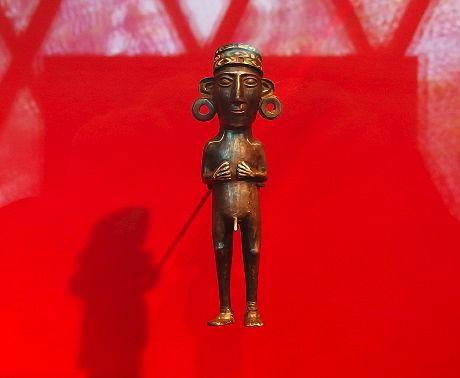 Sex and the Incas

PARIS - The musée du quai Branly presents an interesting exhibition on the fall of the Inca empire. It shows how a squadron of relentless Spaniards, full of audacity, with the help of some weapons, horses -and, we must recall, the suppport from certain conquered communities -, succeeded in taking over an empire of over 10 million inhabitants, that spread over nearly 5000 kilometres long. The confrontation between Atahualpa and Pizarro was dramatic. It was an often bloody combat, where treason was the name of the game, from either side - between Pizarro and his former ally Almagro, as well as between Atahualpa and his half brother Huáscar. The atmosphere is full of fights, of long marches through the jungle, of sots and drums rolling, some of which were ade out of the skin of the conquered ennemies. In this manly face to face, full of hormones, which ended with the blitz of Cajamarca, was it necessary to castrate the Inca? On certain posters, in public transportation, in front of train stations, a beautiful statuette has lost, through a delicated computer intervention, what made it an obvious masculine figure. In a country where it is daring to show one's ear lobes, he could just as well have had his over dimensional ear lobes cut off! Let us protect our innocent children, but not at the price of turning reality around. We would have prefered a complete idol. No doubt the club of the recalibrated-Malraux (cigarette erased) and Jacques Tati (pipe taken away) - is here with us.
 LInca et le Conquistador at the musée du quai Branly, from 23 June to 20 September 2015.

LEYDEN - A former industrial plant of Descartes' favorite city -where he wrote Discours de la Méthode is going to be converted into a hotel. Before this vocational change, a group of contemporary artists will work in this industrial mill on a fashionable theme: what is globalization? We await the answers from Meshac Gaba from Benin, from Argentine Jorge Orta, from American Mark Dion and from local creators such as Andrea Stultiens.
 Global Imaginations at the Meelfabrik, from 27 June to 4 October 2015.

View of the Barbara Hepworth exhibition. Reconstitution of the Rietveld pavilion at the Krolle-Müller museum in Otterlo.

Hepworth, the full and the void

LONDON - She belongs to the generation of Ben Nicholson (who was her husband), of Naum Gabo, Epstein, Henry Moore. Barbara Hepworth (1903-1975) is one of the sculptors of the first half of the XXth century who, starting from figurative art increasingly sought an essential stylisation of forms. She became Dame Hepworth through her artistic skills, and reached a very organic abstraction made of curbs and voids. She preferred directly cutting her sculptures, contrary to her contemporaries who preferred to give a glaze model to an artisan who would then sculpt it. She worked wood as well as stone. The exhibition presents in particular some of the pieces made from the mythical load of 17 tons of guarea from Nigeria. There is also a reconstitution of the installation of her bronzes at the Rietveld pavilion at the Kroller-Müller museum in Otterlo. Accompanied by facsimiles of the magazines Abstraction Création or Axis, this is the first exhibition in 50 years to retrace her itinerary. This should help give her the place she deserves next to the giant Moore, who monopolized all the publics adoration.
Barbara Hepworth, Sculpture for a Modern World at the Tate Britain, from 24 June to 25 October 2015.

PARIS  The figures make our heads turn: Jacques-Henri Lartigue (1894-1986) left behind 135 volumes of photographed journals that cover 84 years of activity, from 1902 to 1986, i.e. 14 423 pages. Out of his nearly 200 000 images surveyed, colored photographs represent 40% of the total. Yet this part of his work was put aside and the public at large identifies Lartigues work with black & white photography. This exhibition  the result of some very tedious work - corrects that error: all the photos shown are made today from negatives that were patiently restored. Starting with his first camera in 1902, Lartigue made some elegant autochromes from 1912 to the Roaring 20s, and did not come back to color photography until after he turned 50 years old. So here we have some bucolic scenes with such socialites as the Empain or the Kennedys. Lartigue was then totally unknown, and was only revealed to the general public in the major exhibition at the MoMA in New York in 1963. There are photographs of travels to Cuba or at Piozzo in Italy. In 1977, when he was over 80 years old, he made real fashion images in a saturated chromaticism in a Guy Bourdin style (Marie Bailey in the pool at Eden Roc for example). The announcement is not meant to fool us, as this exhibition is a real discovery.
 Lartigue, la vie en couleurs at the Maison européenne de la photographie, from 24 June to 23 August 2015.

Naples in the 17th century

MONTPELLIER  Caravaggio, who spent two short periods here, and Ribera symbolize the greatness of Napolitan painting in the XVIIth century. Behind these great giants hide other painters who are just as powerful and surprising, though not as well known far from Pausilippe As an example: Caracciolo and Flemish artist Louis Finson, of pure Caravaggio influence, Giordano or Recco, a specialist of fish and seashells he would draw daily down at the market and on the port.
 Lâge dor de la peinture à Naples at the musée Fabre, from 20 June to 11 October 2015.

The beginning of her career coincided with a trip to London in 1975, in which the provisional would become permanent. It was indeed during this stay that war broke out in her country, Lebanon, and Mona Hatoum (born in 1952) decided to study art in London. The distance as well as the violence affected by the absurdity of it all would give her the theme of her first performances, like the one in which for seven hours she managed to stand in a box covered with clay (Under Siege). Or when she is wrapped up like a mummy and lies on a hospital bed while submitted to constant bombing of news from the world over with details of the Lebanese inferno. The retrospective at the Centre Pompidou definitely gives the impression of a fragile world  symbolized by the huge geography map made of glass marbles covering the floor -, covered with hot points (materialized by a red, neon flashing planet in Hot Spot). War, being locked up, surveillance: Mona Hatoum deciphers the fears which will not be disappearing very soon.
 Mona Hatoum is the subject of a retrospective at the Centre Pompidou, from 24 June to 28 September 2015.

The photographic production of an important artist (born 1942) of the contemporary French scene.

Ever since it was forged by Dubuffet in 1945, the term art brut has had remarkable success. But what does it cover exactly and how does it distingue itself from concepts that came after it such as singular art - born in 1978 with the exhibition of the Singuliers de lart-? What place does the art of the crazy occupy, that form studied by the pioneer alienists such as Hans Prinzhorn? In the context of an exhibition at Mons in 2015, and through short and comprehensive essays, this bilingual volume touches on these questions of definition, underlines the role of a few major collections and mentions great figures, all of which are not from a far-away past: next to Aloïse, Chaissac or Augustin Lesage, we have indeed Robillard and his wooden rifles, Michel Nedjar and his dolls, Jacques Trovic and his embroideries. Each work with its theme is an opportunity for rediscoveries, like that of Marco Decorpeliada, the inventor of the schizometer. To calibrate this original instrument that measures mental disturbance, the author noticed that the three figure codes of the American Psychiatric Association that describe pathologies had a systematic equivalent in Picard frozen foods.
 Outsider art in question, directed by Carine Fol, CFC éditions, 2015, 224 p., 39.

PARIS  The Canson drawing prize for 2015 was awarded on 22 June 2015 to Argentine artist Adrián Villar Rojas.

VILNIUS  The modern and contemporary art fair - Art Vilnius - will be held from 25 to 28 June 2015, and Ukraine is the guest country.