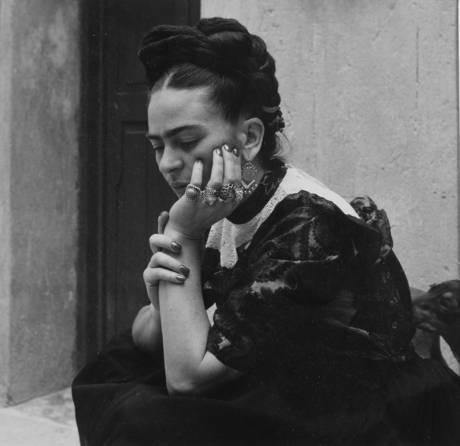 PARIS  Her family name is famous, her surname not so. Lola Alvarez-Bravo (1903-1993) was a photographer like her husband Manuel, who really was well known. They separated early on in their lives, right after their son was born, and as she had started her career with that name she decided to keep it. She inherited Tina Modottis camera when the latter was forced to flee Mexico, and she used it to create a social fresco of her country: street vendors, ordinary women, fishermen, mill workers or prostitutes, but without ever fantasizing or dipping into Surrealism  except through collages. She was a friend of Cartier-Bresson, of Rivera, of María Izquierdo - Antonin Artauds mistress- as well as of the poet Xavier Villaurutia, and she made many portraits of them and others, including her best friend of course, Frida Kahlo. In an interview on Mexican television station Televisa she unveiled other talents. Indeed she was the one who organized in 1953 the first retrospective of Frida in her own gallery in Mexico. The artist was exhausted by her suffering and by a recent bone marrow transplant. Yet the one who was to become a world icon went to it any way. She was probably the only artist to come to her own exhibition on a stretcher. This sensitivity, this empathy with her subjects make Alvarez-Bravo a very touching photographer and a perfect representative of the humanist school.
 Lola Alvarez-Bravo at the Maison de lAmérique latine, from 23 September to 12 December 2015.

Tzara, beyond the dada movement

STRASBOURG  In the dictionary, his name has a synonym: dada. This surely favoured his notoriety but at the same time limited it. Very few people know that Tristan Tzara (1895-1963) had a life after 1915 and the Cabaret Voltaire in Zurich. He was a friend of Soupault, of Hans Arp, of Picabia, to the point of moving into the latters home in Paris in 1919. He took part in the Surrealist adventure, wrote poems and plays, among them La Fuite and LHomme approximatif (the Approximative man, which gave its name to this retrospective). He was politically committed and supported the Spanish Republicans, became a member of the French Communist Party and then opposed the Soviet intervention in Budapest and the war in Algeria. Tzara befriended the culture icons of his time, had architect Adolf Loos design his house on avenue Junot and was a great collector. The exhibition insists on his perceptiveness, showing that he was interested in tribal arts as some objects from his personal collection are, today, at the muse du quai Branly -, in young painters like Camille Bryen or Francis Gruber as well as in his buddies Miró, Delaunay and Masson.
 Tristan Tzara, lhomme approximatif at the musée dArt moderne et contemporain in Strasburg, from 24 September 2015 to 17 January 2016.

The beauty of what is sacred

FLORENCE  When it was taken to the USA at the end of the XIXth century, Millets Angélus was followed like a prophet by hundreds of thousands of worshippers. Today it exceptionally leaves France, but there should be much less a reason for confusion. The painting is at the heart of Bellezza Divina, which at the Palazzo Strozzi examines the relations between painting and sacred art, from Van Gogh to Matisse and Guttuso. From 24 October 2015 to 26 January 2016.

LILLE  With current events from Syria to Hungary being so depressing, the show at the Palais des Beaux Arts offers an antidote with Joie de vivre. It brings together artists from all times who found in worldly pleasures a vital driving force of life: Brueghel and Renoir, of course, but Chardin, Rodin and Roy Lichtenstein as well. From 26 September to 17 January 2016.

PARIS  In parallel to the Musées royaux des beaux-arts in Brussels, the Louvre is also delving into futurology. In Brève histoire de lavenir (A brief history of the future) it wonders with a squadron of artists what our universe could be like in 2050. From 24 September 2015 to 4 January 2016.

Patrick Neu, fascinated by what is ephemeral

Those who saw Patrick Neus most recent retrospective at the Palais de Tokyo were undoubtedly fascinated by a series of glasses with a stem. The artist had reproduced on the latter with a very thin paintbrush, on a background blackened by smoke, large western paintings, from Rubens to Douanier Rousseau. We would have liked for the movie to tell more about this extraordinary tour de force that brings to mind the masterpieces done by journeymen or the strange objects from a Renaissance kunstkammer. On the other hand it talks more of the making of of the exhibition, with parts that go on and dialogues that are somewhat artificial. But it does bring to life the untypical figure of this artist, an enemy of the mundane, who created in a chosen isolation at the heart of the Vosges mountains, surprising works in glass, wax, smoke and bees wings.
 Le Complexe de la salamandre, by Stéphane Manchematin and Serge Steyer, produced by Mille et Une Films et Bix Films. DVD on sale since September at 15.

It is high time to turn Fragonard into a deep painter, Philippe Sollers wrote back in 1987 in an essay that accompanied the retrospective dedicated to the painter at the Grand Palais. Some thirty years later, when the painter comes back to the same venue, with paintings that are even more romantic, it is not a bad idea to publish this essay once again. Sollers juggles brilliantly between Diderot, Sade, the abbot de Saint-Non, light actresses such as Vestris or Guimard (who were the painters main admirers), the Grimm brothers or artist David, sprinkling his sentences with spicy words: I will paint with my rear-end is one of the only quotes unanimously attributed to Fragonard. We discover a painter who was quick, who went rarely to the court where Madame de Pompadour and Marie-Antoinette ignored him, who was in love with Italy, and who, unexpectedly is put in parallel with Manet and Picasso rather than with Watteau. A free man whose last joke played on others was his own death at the age of 74 when in the middle of the month of August he ate an ice cream and got a cold.
 Les surprises de Fragonard, par Philippe Sollers, Gallimard, 144 p., 25.

A tribute to Jean-Christophe Averty, who shook French TV by his humour and innovations (Photo Hamilton/Byrne)

LONDON  The Tate Modern has announced the opening of its new, ten-story tall building, designed by Herzog & de Meuron on 17 June 2016.

PARIS  La Semaine des cultures étrangères (The week of foreign cultures) will be held in the foreign cultural centres from Algeria to Vietnam, from 25 September to 4 October 2015.