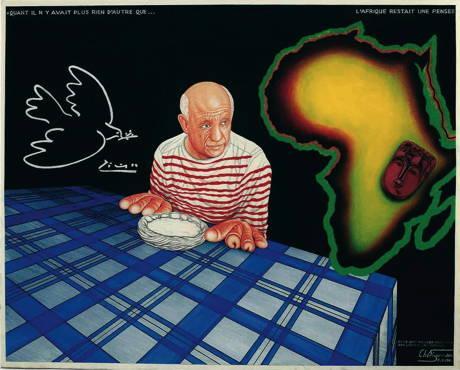 Talk to me about Picasso

PARIS - Without a doubt he is the most famous artist of the XXth century. The Demoiselles dAvignon, Guernica are world icons. His life wrought with excitement, his love affairs, his extraordinary productivity (nearly one work per day, so they say, for 80 years), his political commitment. One can not like Picasso (1881-1973) but one is necessarily defined according to Picasso. The artist's extraordinary popularity has nourished copies, reprints, pastiches, satires. The exhibition presents this "universe" of Picasso", in which creators as different as David Hockney, Emir Kusturica, Jean-Michel Basquiat or Chéri Samba hang side by side. From Pop Art to Bad Painting, from erotic painting to the political manifesto, there is not a field in which his influence is not present. Picasso went from being a simple mortal to a tutelary deity
 Picasso.mania at the Grand Palais, from 7 October 2015 to 29 February 2016.

In the darkest depths of the soul

LONDON  In his painting Caprichos he painted human turpitudes. Even in his mundane portraits, deprived of any satirical dimension, Goya (1746-1828) also proved to be a merciless psychologist, shedding light on the coquetishness of the duchess of Alba, his mistress, the médiocrité of king Ferdinand VII, the rich inner life of his writer friend Jovellanos or his own evolution over a half century, his self-portraits from 1773 to 1820. Surprisingly, no exhibition had ever been dedicated to this side of his work. This is therefore a very unique exhibition organized by the National Gallery with close to half of its one hundred and fifty portraits listed  oil paintings on canvas or brass, chalks or pencil on paper. Some of them crossed the Atlantic for the first time in a long time, such as the Countess of dAltamira (Metropolitan Museum). Others, usually hung in private collections, are shown for the first time to the public, some are rediscovered - such as Don Valentín Bellvis de Moncada y Pizarro - while others are contested, likeDoña Isabel de Porcel, from the National Gallery. And there is also the painter's will, painted when he was deaf and somber: his grandson Mariano, his very last portrait, painted on the eve of his demise.
 Goya : The Portraits at the National Gallery, from 7 October 2015 to 10 January 2016.

THE HAGUE  The sub-title is pleasant and well-found: these "selfies" from the Golden century correspond to countless selfportraits produced by Dutch painters in the XVIIth century. They did it to give themselves a public image and at the same time to prove their virtuosity We find Rembrandt, Jan Steen and Gerrit Dou as well as a woman Judith Leyster, very ugh in demand at the time. Please note that the museum which is usually very easy going as far as photographs are taken, has forbidden the use of selfie sticks
 Dutch Self Portraits  Selfies of the Golden Age at the Mauritshuis, from 8 October 2015 to 3 January 2016.

LYON  The luddites, angered artisans, destroyed their work tools that did their work for them. Artists on their part, while sometimes portrayed negatively (like in Metropolis by Fritz Lang), most often were fascinated. The exhibition covers more than two centuries -starting with a camera obscura from 1800- , proves this by bringing together Claude Monet (an adept of locomotives), Cubist artist Léger or Futurist artist Russolo (both fascinated by metal and speed), as well as the ironic Duchamp (and his bicycle wheel) and the representatives of art brut. The gigantic Méta-Maxi by Tinguely (12 metres long), come from the Daimler Art Collection in Stuttgart and will be put into motion for this occasion.
 Lart et la machine at the musée des Confluences, from 13 October 2015 to 24 January 2016.

PARIS - The Shadows fill up a whole room. It is easily understood as we have here all of the 102 paintings! This late work of Andy Warhol's is the main piece of this exhibition dedicated to his taste for series and multiples. Of course we will see his Jackies and his Maos as well as less known ensembles, such as his Screen Tests, portraits filmed in the sixties.
 Warhol Unlimited at the musée dArt moderne de la Ville de Paris, from 2 October 2015 to 7 February 2016.

No one expected Michel Charzat, known as a politician, to be the author of an artistic biography. Yet, he had already shown his tasse for the period between the two wars, in La jeune peinture française 1910-1940. Now he has plunged into the life of a giant (1880-1954), a lover of women and beautiful cars, who at a time was included among the giants of the avant-garde, with Matisse, Braque and Picasso. After being a pioneer of Fauvism and of Cubism, as well as the leading discoverer of African art, Derain never managed to lift himself up from his unfortunate trip to Germany in October 1941 with Vlaminck, Despiau and Van Dongen. The former soldier, the friend of Apollinaire, of haute couture icon Paul Poiret, of Erik Satie, Jean Renoir (he played a small part in La Fille de leau), became someone to be avoided like the plague. It is maybe his own experience of ostracism (Charzat was excluded from the Socialist Party in 2008) that gives the author his empathy with his subject. This cruel parable of the apotheosis and the decline is quite convincing and certain periods of his life are well explained: his life in Montmartre, the description of the workshop at N° 13, rue Bonaparte, or the relationship with his art dealer Paul Guillaume.
 André Derain, le titan foudroyé, by Michel Charzat, Hazan, 384 p., 39.

BOLOGNA  Foto/Industria, the photography biennial dedicated to industrial photo, will be held from 3 October to 1st November 2015.

BRUSSELS  The biennale of Art nouveau (guided visits of emblematic locations) will be held from 3 to 25 October 2015.

CHRISTCHURCH (New-Zealand)  The 8th Scape biennial (art in public areas) will be held from 3 October to 15 November 2015.

CURITIBA (Brazil)  The biennial of contemporary art, on the theme of light, will be held from 3 October to 6 December 2015.