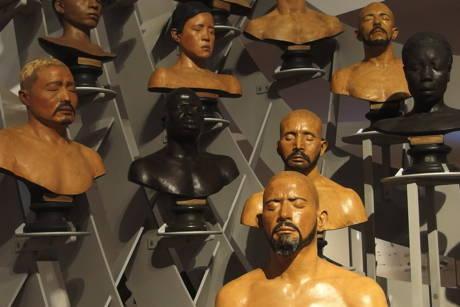 Neanderthal, Cro-Magnon and us

PARIS  We have waited six years for this moment, the reopening of the Musée de lHomme. From up high on its hill at Chaillot, the mythical location created by Paul Rivet and Georges Henri Rivière, where Picasso and Derain sought their inspiration, had to find itself a new identify after it was stripped at the beginning of the XXIst century of its famous ethnographic collections which enriched the musée du quai Branly and the MUCEM in Marseille. Rather than be nostalgic the museum decided to walk a different path by putting man at the centre of three fundamental questions: who is he? Where does he come from? And the most difficult one  where is he going? The institution centered around its treasures  the skulls of the man from La Ferrassie (Neanderthal) and the old Cro-Magnon as well as the Venus of Lespugue and the sculpted plate of the Madeleine which taught us the unthinkable when discovered in 1868, i.e., that we lived at the same time as mammoths. The museum of Chaillot sets itself as a museum-laboratory. It is indeed both a research centre with more than one hundred scientists attached to it, and a centre for studies and encounters with its Balcon des sciences  and welcomed 20 000 visitors during its first three days, free of charge.
 The Musée de lHomme reopened to the public on 17 October 2015.

Lyon, a small version of Florence

LYON  It was the capital of Gaule and the birthplace of Roman emperors Claudius and Caracalla. During the reign of François I it was the location for various fairs and the gateway for Italian merchants, and was the commercial lung of France. Yet, aside from one or two painters - like Corneille de Lyon  we know little about the local artistic production during the Renaissance, when the Italian community played a leading role and when François I made the town one of its bases to conquer the peninsula. The exhibition brings together some 300 works to try to bridge this gap. It includes illuminations and enamels as well as engravings, drawings, paintings, tapestries and stained glass windows, and even scientific instruments such as the Jean Nazes astrolabes.
 Lyon Renaissance at the musée des Beaux-Arts, from 23 October 2015 to 25 January 2016.

PARIS The Centre Pompidou has programmed a large Anselm Kiefer retrospective exhibition in December. But the Bnf has stolen the show with a retrospective on the German artists relation to books. According to the statistics presented, 60% of his production is concentrated in books, each one unique. These books may be either in paper and cardboard, including photos and varied objects such as oil, salt, branches, hair, sand, as well as books in lead  the artists favourite material, and weighing up to 200 kg - not to be set on your grandmothers coffee table! Kiefer is a great reader who pays tribute to the main influences he has had, from English esoteric philosopher Robert Fludd to Michelet and Celan, and recently he has come back to more traditional shapes. After a long period of questioning on Germanys feeling of guilt and then on Jewish mystique, his latest productions unveil a sort of appeasement, with flowers and erotic drawings.
 Kiefer at the Bibliothèque nationale de France, from 20 October 2015 to 7 February 2016.

Top of the Bill

MADRID  He lived a full life but is ill-known. Max Bill (1908-1994), a Swiss from Winterthur, was a student at the Bauhaus during its prime time -at the end of the twenties  founded in 1951 the school of Ulm called the new Bauhaus (where the elders Gropius, Albers and Itten intervened), animated concrete art and was a talented designer we owe him an ageless clock, the mural clock at the Junghans-. The exhibition gives us a glance into all of his production, with some preference for his abstract and geometric paintings, which he also reproduced in installations and sculptures (in particular at Zurich).
 Max Bill at the Fundación March, from 16 October 2015 to 17 January 2016.

PARIS  Like its alter egos  Frieze for example  the FIAC (International Contemporary Art Fair) has become a galaxy to itself with an in and an off (the new Officielle, at Cité de la Mode et du Design), has links with galleries and museums (among them the Louvre and the Petit Palais), and has an out-of-the-walls programme at the Tuileries and the Jardin des Plantes, including a sound itinerary on the banks of the Seine. The latter is becoming as over-dimensioned as the Nuit blanche. It is practically impossible to cover the whole event which this year celebrates its 42nd edition and which in its beginnings- held itself prudently to the Grand Palais. The large building of the 1900 World Exhibit remains nevertheless the heart and point of reference for the galleries. 175 of them- from Galerie 1900-2000 to David Zwirner - will present a mere 1733 artists.
 FIAC from 22 to 25 October 2015.

Dismas, the one on the other crucifix

Christ was crucified next to two other men, the good and the bad thief. The first, long ago forgotten, was quite famous in his time, used in particular as the last resource in the execution of criminals, as a viaricum towards the "good death" and redemption. This book is an in-depth study on Dismas' posterity and his iconography, it reviews not only the position of the different crucifixes, the shape of the cross and the nails, the work of the medieval brotherhoods, but the catalogue of the tortures (impalement, evisceration, or the vertical division of the body at the scimitar) as well. Was Dismas represented young or old, nude or dressed, good looking or ugly? Does he look at Jesus or not? Does he suffer? Is the angel always represented on his shoulder? From Antonello da Messina to Cranach, from Gaudenzio Ferrari to Rubens, the greatest painters studied his case. During the XVIth century, during the Reformation, Dismas was very much in vogue, he even accompanied Christ to limbo and became a just. It is high time we rediscovered this famous stranger.
 Le voleur de paradis by Christiane Klapisch-Zuber, published by Alma, 2015, 384 p., 29.

PARIS  The contemporary art fair Slick is being held at pont Alexandre III from 21 to 25 October 2015.

PARIS  The 5th edition of the YIA Art Fair will bring together 65 galleries at the Carreau du Temple as well as an "out of the walls" itinerary, from 22 to 25 October 2015.

RIVESALTES  The Mémorial du camp de Rivesaltes, in a building designed by architct Rudy Ricciotti, opened to the public on 21 October 2015.

TORONTO The modern and contemporary art fair, Art Toronto, will be held from 23 to 26 October 2015.

Through a case study, the importance of bricks in contemporary architecture