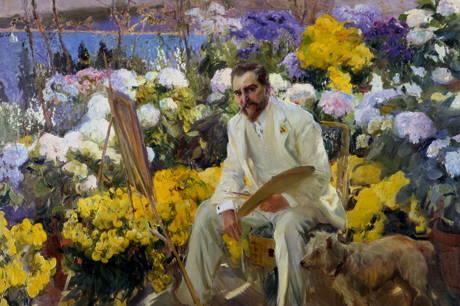 Painters in the garden

The invention of the tube of paint in the XIXth century was revolutionary: it freed artists from the tyranny of their studio and scattered them all over the countryside and beaches. How could Impressionism and even Fauvism have come to be without that freedom? Landscapes that until then had been sketched with a pencil and then perfected indoors, now acquired an unknown authenticity. Some grains of sand have even been found on certain paintings of Monets. Once artists got used to that they spent much more time in their gardens, sketching the change of seasons, the effects of the snow, the budding of the flowers. The exhibition shows how, from Renoir to Klee, painters almost became horticulturists, ranging from the Flemish and Spanish still lives to a vibrant and lively representation of Nature. Nearly 120 works of art, some of which of major importance, others less known (by Nolde and Sorolla among others), have been brought together to convince us that not only have seasons lost their wits, but that spring is permanent.
 Painting the Modern Garden: Monet to Matisse at the Royal Academy of Arts, from 30 January to 20 April 2016.

Moreau-Rouault, reflexions in a mirror

PARIS  In one corner we have Gustave Moreau (1826-1898), a Symbolist whose works look like chiseled cameos; in the other, Georges Rouault (1871-1958), who reached an amazing simplification of forms, to a thick touch that resembled sculpture. Strangely enough, there is a very close link between the two artists! Moreau was the adored master of Rouault - as well as that of Camoin, Marquet and Matisse  at the school of Beaux-Arts, and Rouault was the guardian of the temple, the curator of the moving home-museum of Gustave Moreau for thirty years. So there was more than enough reason to bring these tow men together. Their parallel paths follow the great themes of landscapes, woman and the sacred. It offers some discoveries such as certain works by Rouault from private collections like this Head of Saint John the Baptist and some surprising analogies, in particular in the last part in which sketches by Moreau answer the quasi abstractions by Rouault.
 Gustave Moreau, Georges Rouault, souvenirs datelier at the musée Gustave Moreau, from 27 January to 25 April 2016. Catalogue Somogy (with an interesting selection of letters).

BASEL  The gigantic Coucou Bazar, shown at the museum of Arts décoratifs in Paris in 2013, this swarming accumulation of characters, is the star of this retrospective of Jean Dubuffet (1901-1985). It is not strictly thematic but it does give particular importance to the relations of the artist with the landscape, which he  a lover of poor materials - rendered with sand, sponges, pebbles, string and cob, among others.
 Jean Dubuffet - Métamorphoses du paysage at the Fondation Beyeler, from 31 January to 8 May 2016.

LAUSANNE  He died on the same year and the same month as Robert Capa (May 1954), and like Capa he too was a member of Magnum, the photography agency. But posterity has been less generous with the humanist photographer than Werner Bischof was. After photographing Germany destroyed in 1945, the high plains of Peru, rural Cambodia and the American suburbs, he died as his car fell into a ravine in the Andes. But he left very personal and sensitive photographs of a world in accelerated mutation. Catalogue Helvetica.
 Werner Bischof at the musée de lElysée, from 27 January to 1 May 2016

A life after the Shoah

PARIS  How can one reintegrate, how can one pick up ones life again after having been in an extermination camp and having seen the death of ones loved ones? Should one pick up ones cobblers shop or go far, to Palestine, Australia or Canada? The exhibition looks into the itineraries of the Jewish survivors of the Shoah in Poland, France, Germany or Ukraine and reminds the public of something that is ill-known: some of them spent an extra two years in the camps, like that of Bergen-Belsen, which was re-arranged, before they could take a new departure.
 Après la Shoah at the Mémorial de la Shoah, from 27 January to 30 October 2016.

PARIS  Contemporary Chinese artists monopolize the podium of the most bankable. But who are they, where do they come from, what do they paint? While the Western public mispronounces their name and only remembers a handful of them, they are a huge crowd. The Fondation LVMH brings together some ten artists, from 52-year old Liu Xiaodong to 28-year old Tao Hui, under the name of Bentu, which means native land.
 Bentu at the Fondation LVMH, from 27 January to 2 May 2016.

Memories of the house of the dead

I tried, with the little power I have, to give an image of incarceration that seems as trying as it really is. Danny Lyon made this bet when he brought out this pioneer book in 1971. He had had the rare privilege to photograph, freely, for 14 months, six Texas penitentiaries. The cells, the daily life, the refectories, showers and legends that sounded like manifests Forty five years, armed robbery, or Life sentence, theft. It is not difficult with the three strikes law in Texas (or the big bitch as the prisoners call it). If one commits three crimes, even without killing someone, one is automatically sentenced to life in prison. The book includes photographs, fac-similes of sentences, letters and drawings by some emblematic prisoners such as Billy McCune (1928-2007), condemned to death penalty in 1950 for rape and the case was never really proven. This book is a real plea against State violence. The book made history, it helped commute McCunes sentence, but did not reverse the tendency. At the time the USA had 250 000 prisoners. Today there are over two million.
 Conversations With The Dead, by Danny Lyon, Phaidon, 2015, £45

Buy from the Phaidon store

ANGOULÊME  The 43th international festival of cartoons (Festival International de la bande dessinée) will be held from 28 to 31 January 2016.

BERKELEY - The Berkeley Art Museum and Pacific Film Archive will inaugurate on 31 January 2016 its new administrative building, a building from 1939 (the former printing house of the University of California) transformed by Diller Scofidio & Renfro.

BOLOGNA  The modern and contemporary art fair Arte Fiera will hold its 40th edition from 29 January to 1 February 2016.

GENEVA  The modern and contemporary art fair artgenève will be held from 28 to 31 January 2016.

INNSBRUCK  The modern and contemporary art fair Art Innsbruck will be held from 28 to 31 January 2016.

As a photographer working for the Ministry of Reconstruction, Henri Salesse (1914-2006) left a vivid portrait of postwar France.