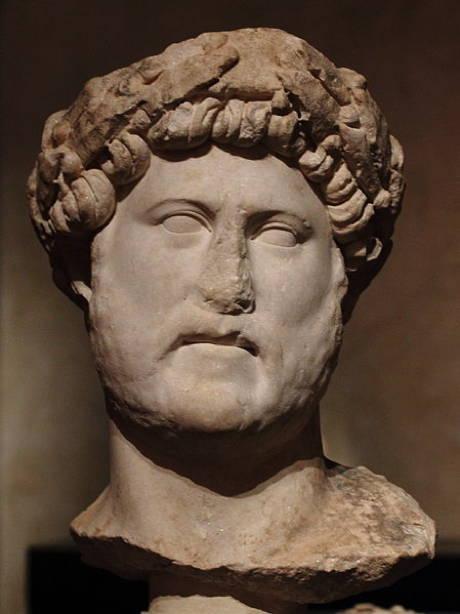 BAVAY (département du Nord) - Millions of copies of Mémoires dHadrien (Memoirs of Hadrian) have been sold throughout the world, translated into forty languages, listed among the best sellers of the century. It is definitely the most famous book written by Marguerite Yourcenar (1903-1987). The Forum antique de Bavay had the good idea of investigating the long genesis of this work. As of 1913, young Marguerite admired the famous bust of the Emperor at the British Museum. In 1924, near Rome, she was dazzled by Hadrian's Villa. But it was only after her exile to the USA in 1939, the war, then the chance rediscovery of a trunk with her first manuscripts on the subject that she again took up the adventure that would be crowned with success when her book appeared in 1951. Why Bavay? Here we are very near Marguerite Yourcenar's roots, and the site, completely unknown, still maintains the remnants of one of the largest forums of the Roman world. While Hadrian, who governed from 117 to 138, probably never came through here (contrary to Tiberius), the objects gathered here present the person, his era, his universe, his travels, his politics, his love life. From the marble bust in the Louvre to the hook from Amiens (a tourist souvenir two million years old from Hadrian's wall in Scotland), the medallions of the ephebe Antinous to Marguerite Yourcenar's scrapbooks (kept in her house in Maine), the surprising power of seduction of the Antiquity works at various scales.
 Marguerite Yourcenar et lempereur Hadrien, une réécriture de lAntiquité (Marguerite Yourcenar and emperor Hadrian, a rewriting of Antiquity) at the Forum antique de Bavay, from 4 February to 30 August 2016.

 Reminder: The Villa départementale Marguerite-Yourcenar, a writers' residence at Saint-Jans-Cappel (59270), will schedule conferences on the theme.

Hermann Göring (1893-1946) was a brilliant aviator during World War I and he became one of Hitlers closest lieutenants. As head of the Luftwaffe, and the authorizing officer of the four-year plan, he loved pomp and honours. He accumulated a phenomenal wealth, built himself a sumptuous house in the country, Carinhall, which he furnished with the most beautiful European works of art. He did this sometimes by purchasing the goods, now and then by exchanging, and most of the time by confiscating large Jewish collections. Once Germany had occupied France he was an attentive visitor of the Jeu de paume where the most beautiful trophies were presented to him, like in a gallery. An extraordinary document summarises the bulimia of the obese potentate, the hand written catalogue in which all 1 376 works of his collection were recorded. Among them we read some 50 Cranach, 40 Van Goyen, 30 Boucher, as well as works by Botticelli, Georges de la Tour, Courbet, Renoir or Picasso. Rose Valland (1898-1980), one of the heroines of the movie Monuments Men and the deputy curator at the Jeu de paume found this catalogue and her precise repertoires allowed for many stolen works to be found. Her work was sitting patiently in the boxes of the Diplomatic Archives at La Courneuve. It has finally been published in a truly scientific way. The photographs that accompanied the notes have been restored and are reproduced. We would love to know what happened to the works  whether they were returned to their owner, lost, waiting  but that would have demanded much more research and pagination. In the case of number 13 for example, the Judgement of Pâris by Cranach the Elder, confiscated in 1936 in exchange for the right to emigrate to Switzerland, was it ever returned in 1954 to its owner, Robert van Hirsch, who donated it to the Kunstmuseum in Basel in 1977. Each painting could push the reader to carry out his or her own investigation.
 Le catalogue Goering (in French) by the Archives diplomatiques and Jean-Marc Dreyfus, Flammarion, 2015, 608 p., 29.

He is a major figure of XIXth century Italian painting, but his reputation hardly went beyond his countrys borders. From beyond the grave he can find consolation in the fact that his Kiss is better known than he is and inspired, they say, the Baiser de lHôtel de Ville by photographer Doisneau. Francesco Hayez (1791-1882) received a very classical training, was inspired by Canova and became the incarnation of Romanticism and a great interpreter of historical painting. He alternated with penetrating portraits, large mural compositions, biblical paintings and even flower bouquets. This book, which accompanies a large retrospective at the Gallerie dItalia in Milan until 21 February 2016, reviews all this surprising diversity. We could add that his career was as long as that of his compatriot Titian  they were both native from Venice  as he lived to the age of 71! One of his first known paintings (1807) shows him with his family, at age 16. One of the last, from 1878, is a Selfportrait at 88. The only thing missing in this book are the erotic drawings that were shown in London in 1997, by a man who was also a great seducer.
 Francesco Hayez (in Italian), directed by Fernando Mazzocca, Silvana Editoriale, 2015, 384 p., 34.

It is quite daring to present the great mystics under the appearance of beautiful women in ecstasy (even if it often the truth  it would suffice to read again Therese of Avila or Jeanne de la Croix  their emotion has deeply erotic accents). It is not sure after all that these brides of God, scantly dressed here, could have such irreproachable beauty. Pignon-Ernests impeccable drawings and the writing of André Velter embrace two thousand years of extreme religious passion, from Marie-Madeleine to Madame Guyon, including Angèle de Foligno and Louise du Néant (1639-1694), who was placed in the hospital of la Salpêtrière and willingly declined drastically as she licked crumbs off the floor or her neighbors wounds, and drank out of a skull.
 Pour lamour de lamour, (in French), Ernest Pignon-Ernest, texts by André Velter, Gallimard, 2015, 176 p., 35.

McCurry, a certain idea of India

In his introduction, William Dalrymple reminds the reader that India is a land of contrasts: on one side huge, shiny malls, on the other, barefoot peasants with their hoes and their hand-pulled cart; on one side, 55 billionaires (twice the number ten years ago), on the other, 72% of the population living with less than two dollars a day. The India which Steve McCurry (born in 1950), a great reporter at Magnum, has traveled far and wide for the last thirty years, is at a crossroads between thousand year old traditions and pitiless globalization. Bicycles pedaling in the puddles due to the monsoon, women in the fields, children in the streets, slums in the middle of rusty pipes, a deluge of colors in Rajasthan, and so much more. There are strong images everywhere, both in the wild nature of Ladakh as well as in overpopulated cities, the Hindu singing under the shadow of the Banyan tree as well as the old steam engines. And always, in the middle of all this, the human beings who have this changing and colorful decor for their every day surroundings.
 India (in English) by Steve McCurry, Phaidon, 2015, 208 p., £39.95.

Buy that book from the Phaidon store

Strolling through the Louvre

From Apollos gallery to Milo of Croton, from Georges de La Tour to Delacroix, a poetic and ironic stroll through the major Parisian museum through small watercolor paintings which remind us inevitably of the universe of Sempé.
 Le Louvre de Clara Baum (in French), Somogy, 2015, 112 p., 19.

Who's who in painting

Great names of the history of art looked at through brief biographies. We have Degas but not Renoir, Delacroix but not Courbet. Can we cover Michel-Angelo as quickly as Banksy?
 50 artistes incontournables (in French), by Valérie Mettais and Louisa Alberti, published by éditions Palette, 2015, 192 p., 29.50.

From Alechinsky to Warhol, 54 biographies help define art from the postwar period to our day. All the artists started to produce in the period between the two wars, except for Fernand Léger (born in 1881), the unexpected troublemaker of the XIXth century while neither Picasso nor Matisse or even Duchamp were chosen. After abstract art with Pollock and Soulages and pop art, with Warhol and Erró, the key values seem to be work on the human body, with Orlan, gigantic installations with Christo or Serra, graffiti with Haring or JonOne and what else?- speculation with Hirst, Koons and Murakami.
 Lart contemporain (in French), by Eloi Rousseau, Larousse, 2015, 240 p., 25 9782035923547

The beauty of industry

Industrial photography has been a noble discipline for some time now, represented by great names such as Moholy-Nagy and François Kollar. Since 2013, the MAST foundation in Bologna organises a specific biennale. The present book gives a richly illustrated report of the first edition of 2013-2014.
 Masterworks of Industrial Photography (in English and Italian), Electa publishing house, 2015, 704 p., 100.

A focus on Korean emerging art