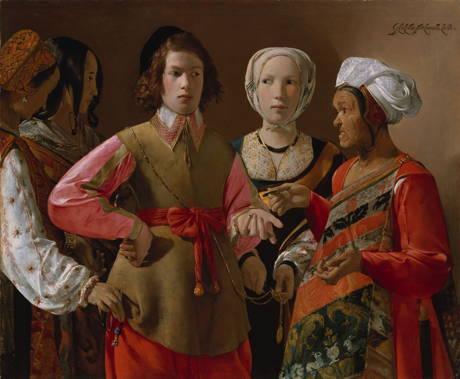 MADRID - There are of course many paintings that come from France. From the Louvre first of all, but from Nantes, Dijon, Grenoble and Epinal as well. But that is no reason to deprive oneself from the rare pleasure of seeing such an accumulation of de La Tour works. Out of the nearly forty paintings unanimously attributed to him, the organisers managed to bring together thirty one. The Getty ad the Kimbell Museums lent their works, as did less obvious ones such as the Queen of England, private collectors or the national museum of Lviv in Ukraine (At the Moneylender's). The Prado is very proud of its two paintings, among them Saint Jerome, discovered in 2005 in the basement of the Labor Ministry. This Lorraine born master of shadows and candlelight died during an epidemic in 1652, and was forgotten until the beginning of the XXth century before experiencing a surprising resurrection through the exhibition Les maîtres de la réalité at the Orangerie in 1934. Only two of his paintings are dated, Saint Peters tears from 1645 at the Cleveland museum, and Saint Peters denial from 1650 at the museum in Nantes. Needless to say specialists have their work carved out, and exhibitions of course contribute to it.
 Georges de La Tour at the Prado museum, from 23 February to 12 June 2016.

FFRANKFURT  Even though the word Mannierism remains, few know exactly what art movement it refers to. It has even contaminated everydayFrench as now to be affected (maniera) is not a quality. Historically, the term concerns a movement at the end of the XVIth century, centred in Florence. The artists, tired of the dictatorship of academic rules turned their backs on them. Necks got longer, models took uncomfortable poses, arms and legs were twisted in a sophisticated manner, they were dressed in rags and strange clothing and the characters were bathed in bright or metallic colours - a specialty of Bronzino. Florence was nostalgic of its golden Quattrocento period and Pontormo, Rosso and Salviati offered it a glorious decadence. The works shown come from the Uffizi and the Galleria Palatina as well as from the Getty Museum and the Louvre, and allow us to discover the works of unknown artists such as Perino del Vega and to remind us that before being a biography writer Vasari was also a well-appreciated gifted artist.
 Maniera, Pontormo, Bronzino and Medici Florence at the Städel Museum, from 24 February to 5 June 2016.

Modigliani, a tribute to Dutilleul

VILLENEUVE-DASCQ  Modigliani, who died at the age of 35 in 1920, is one of the meteorites of modern art. His paintings today are worth millions of dollars and only museums or very wealthy amateurs can afford them. In his time though they were hardly worth anything and one had to be a passionate collector to accumulate them. That is precisely what Roger Dutilleul (1872-1956), a company director who did not have unlimited means, did over the space of thirty years (1918-1946). Indeed he bought some thirty paintings and numerous drawings. His descendants bequeathed the rest of his collection -six paintings and eight drawings  that are the corner stone on which this retrospective was built. There are some one hundred paintings by Modigliani, among which a beautiful series of portraits, put into perspective with works by some of his contemporaries such as Picasso or Zadkine.
 Modigliani, lil intérieur at the LaM, from 27 February to 5 June 2016.

Van Doesburg in all fields

BRUSSELS  During his short life, Theo Van Doesburg (1883-1931) founded the group De Stijl with Mondrian, fought with the Dadaist artists and travelled greatly. A typograph, poet and interior architect, his riche personality is well covered in this retrospective at Bozar, which called in his friends El Lissitzky, Picabia, Kurt Schwitters or the Arp spouses, with whom he founded the Aubette movie-dancing in Strasbourg. From 26 February to 29 May 2016.

Miró against the wall

FRANKFURT  Through some fifty paintings, some of large dimensions, and over a fifty year period (from La Ferme from 1922 to Deux Oiseaux de proie from 1973), the Schirn Museum explores the fascination Miró (1893-1983) had for motives and the texture of walls. From 26 February to 12 June 2016.

Toorop, Art Nouveau and beyond

THE HAGUE  Give me a synonym of Art nouveau in Dutch: Salad oil from Delft. Thats the fault of Jan Toorop (1858-1928), a multiform artist who created posters for products back in 1895. The painter, equally active at the borders of Symbolism and Pointillism, is celebrated at the Gemeentemuseum with 200 of his works. Maybe he will finally receive international recognition? From 26 February to 29 May 2016.

LONDON  The retrospective organised by the National Gallery shows the seminal role Delacroix had on al art of the XIXth and XXth centuries, influencing the Impressionists as well as the pioneers of Abstract art. From 17 February to 22 May 2016.

NANCY  During the period between the two wars, Etienne Cournault painted on everything he could, painting under glass and on mirrors, painting with sand, frescoes, graffiti. This great bourgeois of Nancy followed a very original course, marked by useless objects. He was well-thought of by many great designers and decorators, such as Jacques Doucet, Pierre Legrain and Rose Adler. Yet he was forgotten. The musée des Beaux-Arts tries to correct that fault by organizing this exhibition. From 26 February to 23 May 2016.

Hausmann, from Vienna to Limoges

ROCHECHOUART  Viennese artist Raoul Hausmann, one of the founders of the Dada movement, a pioneer of photomontage and a European nomad, found refuge in the Limousin region and died there in 1971. The musée départemental dart contemporain brings him back to our memory during the celebration of the 100th anniversary of the Dada movement, based on the rich local funds. From 27 February to 12 June 2016.

Balthus, unique in his genre

VIENNA  This retrospective the Kunstforum dedicated to Balthus comes from Rome and shows the influences on his work from the Italian Quattrocento to Oriental art, from Sade to Emily Brontë. From 24 February to 19 June 2016.

MADRID  Born in 1936, Antonio López was never distracted from his original credo, to scrupulously detail the world around him. He is such a perfectionist that we come to a point in which what is ordinary becomes unexpected and a simple shaving brush placed on a bathroom shelf, becomes an extraordinary object. Antonio Lopez was the leader of a group of Realist artists in Madrid who mingle together since the fifties. He is accompanied in the retrospective at the Thyssen-Bornemisza museum, by six colleagues among which his own wife, María Moreno. Lavabo y espejo (Washbasin and mirror) is an example of his focus on objects of everyday life, but he is also knwon for wide cityscapes of the boulevards in Madrid.
 Antonio López is one of the seven artists exhibited in the retrospective Realistas de Madrid at the Thyssen-Bornemisza, from 9 February to 15 May 2016.

Photography at the Beaux-Arts, a rediscovery

During the XIXth century the relations between photography and the arts were not simple. It was seen as an disloyal competitor to service laziness, or else as a wonderful instrument for documentation, as Eugène Disdéri said. As it opened its library in 1864, the Ecole nationale des Beaux-Arts saw this young media enter with panache. It allowed for portfolios of Roman monuments to be made, as well as of ornaments and genre scenes; it immortalised the works of awarded students. Sixty thousand snapshots, often glued on the back of cardboard, soon started to pile up on the shelves: Notre-Dame during its restoration (without the spier), the destruction of the war in 1870, the head of the Statue of Liberty at the Universal exposition in 1878, the Parisian facades as taken by Atget, the ruins in Syria and Lebanon or the happy-go-lucky life celebrations at the Ecole des Beaux Arts. This photography heritage had been forgotten until it was rediscovered in the 70s, a century after its birth. This large book presents a selection organised according to the theme, and includes through the pages some contemporary creations.
 La photographie avec les arts, by Anne-Marie Garcia, Beaux-Arts de Paris, 2015, 400 p., 39.

MARRAKECH - The 6th Biennale of contemporary art will be held from 24 to 28 February 2016.

PARIS - The art abordable art fair will be held at the Belleviloise from 26 to 28 February 2016.

The artist releases strange creatures, that seem to come from a natural history museum