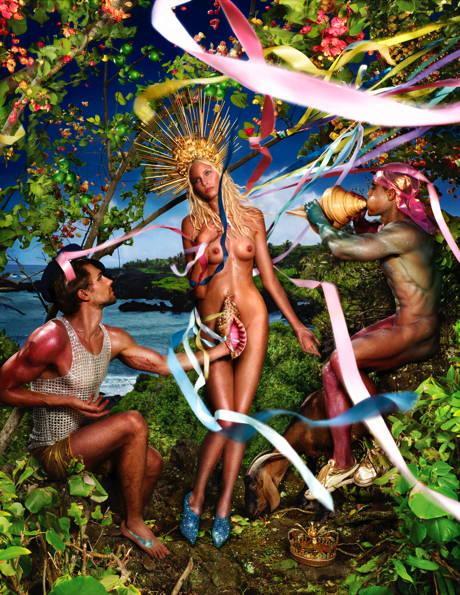 Welcome to the Botticelli club

LONDON  He is one of the heavy weights of universal artists and his Venus appears on the front of the Italian 10 cent of a Euro coin. Sandro Botticelli (1445-1510) is a superstar. But two centuries ago no one would have suspected it. He had been lost in the meanders of time as a painter with a funny destiny, who had shifted from antique nudes to a blind support for the monk Savonarola, going as far as disowning the works of his youth. It took the intervention of the English Pre-Raphaelite painters who revered al that preceded Raphael  to drag him out of his purgatory. Rossetti and Millais could almost ask for copyrights, as their protégé has become a true market value. This exhibition  shown at the Gemäldegalerie in Berlin last autumn- explores that precise phenomenon. Next to a few masterpieces by the Florentine artist it shows all he inspired, from Degas paintings as well as those by Cabanel and Walter Crane. But not only. Schiaparellis fashion, lithographs by Warhol and photos by Pierre & Gilles, as well as the objects that borrowed his name  car rims, womens shoes, perfumes and even fountain pens were also influenced. Something like the synonym of an ethereal, evanescent timeless beauty.
 Botticelli Reimagined at the Victoria & Albert Museum, 5 March to 3 July 2016.

LONDON  Her complicated name, the similarity with Klimt somewhat complicate things. Hilma af Klint (1862-1944) was a Swedish artist who was a forgotten pioneer of abstract art. She had written down on her final will that various decades had to go by before her works were made public. Consequently it was not until 1986 that the world discovered her work, at the LACMA in Los Angeles. Her public success has continuously grown. Some of her works are being shown at Cosa mentale, open until 28 March at the Centre Pompidou Metz, which underlines her relationship anthroposophist Rudolf Steiner. The retrospective in London is organised around her Paintings for the Temple, a group of 193 canvases covered with cabalistic signs and conceived as a dialogue with the spirits. It was created between 1906 and 1915, while the Surrealists had not yet begun their exercises in automatic writing.
 Hilma af Klint at the Serpentine Gallery, from March to 15 May 2016.

The Wyeths, an American dynasty

MADRID  Andrew Wyeth (1917-2009) bestowed an icon of American XXth century painting, Christinas World, with the young woman hiding in the tall grass of the American plains. It entered the MoMA in 1949, and became one of its most famous works, together with the Demoiselles dAvignon. His son Jamie (born in 1946), also a painter, specialised in portraits such as Kennedy, Warhol or Noureev and images of rural America, followed the same path. Here the two artists re put parallel to one another. They had someone to take after, since grandfather N.C. Wyeth (1882-1945) was a famous illustrator of sagas, legends and adventure novels.
 Wyeth : Andrew y Jamie en el estudio at the museo Thyssen-Bornemisza, from 1st March to 19 June 2016.

A taste for cultural shocks

PARIS  How should we hang our paintings? Should it be by chronological order, by artist or by style? The question will never be completely solved and this exhibition organised by Jean-Hubert Martin (he is responsible for the Magiciens de la Terre at Beaubourg in 1989) adds to the confusion Indeed it groups together works from all periods and artists according to largely subjective, elective affinities. A shrews sarcophagus faces a small statuette by Giacometti, reliefs of meals by Spoerri face the emblem of an African tribe: the curator who claims he wants to upset neurons uses all possible rapprochement. This is the spirit of Lautréamont, of the Cadavres Exquis of the Surrealists, Malrauxs ideal museum, songs such as Chapeau de paille. It also brings to mind the Baudelaire of his Correspondances, a rich enough vein that surely deserves to be looked into.
 Carambolages at the Grand Palais. From 2 March to 4 July 2016.

Death on the Nile

CAMBRIDGE  The Fitzwilliam Museum, founded in 1816, launches the celebrations of its bicentennial with an exhibition on Egyptian sarcophaguses, with an obvious title, Death on the Nile. A touch of Agatha Christie! One wonders how they were made, painted, covered with gold and hieroglyphs? The investigation starts with the coffin of Nes-Amun which entered the collections as early as 1822 and has been reinforced by loans from the British Museum and the Louvre. From 23 February to 22 May 2016.

Dubuffet and his collection

LAUSANNE  Jean Dubuffet (1901-1985) created numerous works but he also defended outsider or self-taught artists, which he also collected in great numbers. To celebrate the fourty years since the act of donation that triggered off its birth in 1976, the Collection de lart brut presents once again an unusual ensemble: the 150 works presented in 1949 at the pioneer exhibition at the galerie René Drouin in Paris. From 5 March to 28 August 2016.

Sorolla, a light from Spain

MUNICH  The artist from Valencia is usually put in the category of Spanish impressionists. But actually Joaquín Sorolla (1863-1923) is more from the generation of Signac and the post-impressionists. His palette is charged with light, with a tendency for seascapes, as can be seen in the 120 works presented at the Kunsthalle. From 4 March to 3 July 2016.

One Napoleon or the other

FONTAINEBLEAU  The name brings to mind the classification of the biggest fortunes in the world. But the Forbes family, and Christopher in particular, one of the sons of magnate Malcolm Forbes who died in 1990, have other passions. Walking in his fathers footsteps, he too accumulated a collection of Napoleon memorabilia considered one of the riches in the world. What is strange is the fact it is dedicated to Napoléon III and not to his uncle. Though it does include a few relics from the First Empire, such as an autograph from cardinal Fesch, estimated at 30 000, or a leaf under glass that comes from the tree that sheds shade over the Emperor(s tomb, at 100, it pays tribute in particular to Louis-Napoléon. Letters with Mérimée, among others, photographs, paintings, busts, candy jars or drawings by his own hand (such as the Paysage napolitain, estimate 600) are accompanied by a lovely series of caricatures: with Louis-Philippe, Napoleon III was one of the French leaders to be the most ridiculed by political satire.
Vente Forbes, 5 and 6 March 2016 at Fontainebleau (Osenat).

Prost, lessons from an architect

The conferences at Chaillot have become a sort of tradition. In this training department of the Cité de larchitecture et du patrimoine, renowned architects have already taken the floor, such as Jean Nouvel and Pierre-Louis Faloci. For its 11th edition, in 2015, the honour was bestowed for the first time on a former student: Philippe Prost, born in 1959. He develops the concept of creation being associated to memory, by drawing from his own rich personal experience. The Mémorial international de Notre-Dame de Lorette, with its 600 000 names of soldiers who died during the war, is his most recent creation (2014). But his interventions on the Monnaie de Paris, at the Briqueterie de Gournay or on Parisian joint development zones (ZAC) had already initiated him to work on the strata of time. It sometimes takes the intervention of destiny to launch a career: Philippe Prost had just graduated when he was contracted to restore the citadel of Belle-Ile-en-Mer, a major site of military architecture, a work by Vauban. He definitely took a liking at that moment for heritage, the passion for archives and questions, and creation that is aware of the presence of the past.
 Philippe Prost, leçon inaugurale de lécole de Chaillot, 128 p., 2016, 19

GENEVA  The project to extend the musée dArt et dHistoire designed by Jean Nouvel was rejected during a popular vote on 28 February 2016.

The article in the Tribune de Genève

THE HAGUE  The first trial for the destruction of cultural heritage opened on 1st March 2016 at the International Criminal Court against Ahmad al-Faqi al-Mahdi, a Malian djihadist suspected of having ordered the destruction of Muslim mausoleums at TImbuktu.

How does ceramics fare in contemporary art? (Photo: Thomas Schütte)