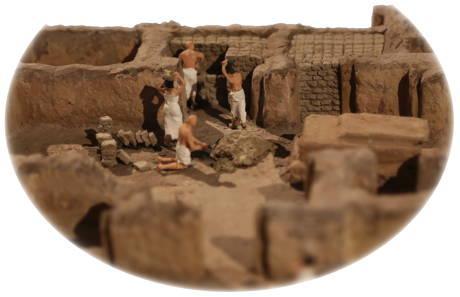 What we know about the Tower of Babel

STRASBOURG  An exhibition with a mysterious title (Ana ziqquratim, which in Akkadian means Towards the ziggurat) tries to bring together all our knowledge of an Oriental myth. While the tower of Babel has acquired an enviable reputation through Biblical marketing it is mentioned negatively as we know in Genesis, as a symbol of mans vanity-, the architectural form under which it has been made popular (in particular through engravings of the Renaissance or in the paintings by Bruegel) partly corresponds to reality. The tower of Babel was the last avatar of the ziggurat, a stepped pyramid with a temple on its last floor. At the beginning (Vth millennium B.C.), it was simply an elevated modest building. Under the neo-Babylonian period (VII and VI centuries B.C.), it reached its most completed form, and became a gigantic edifice dedicated to the god Marduk. The Hebrews, exiled in Babylon, looked upon it with fear and admiration and identified it with the decadent and cosmopolitan civilisation that persecuted them. The drama of the archeologists is that those raw brick structures do not withstand the passage of time as the Egyptians stone pyramids did. In the dry and scorching weather conditions they crumbled down to dust. The exhibition presents various models that bring them back to life, from Eridu to Mari, from Ur to Uruk, all the way to Babylonia-Babel, which won its own place in our imaginations till the end of time.
 Ana Ziquratim, at the Bibliothèque nationale et universitaire of Strasbourg, from 27 April to 21 June 2016.

NEW YORK  Just like in the case of Babylon, located some one hundred kilometres South of Bagdad, it is not easy for our contemporaries to place Pergamon on a map. Yet the city, close to todays Smyrna in Turkey, embodied for over half a millennium (since the IIIrd century B.C.) the sumptuous Hellenistic civilisation that irradiated over a territory of various million square kilometres. At the beginning of our era, this faithful ally of Rome was visited by a number of Emperors, such as Hadrian and Marc Aurelius. It was a cultural center, had a gigantic library, and when papyrus came to lack due to the embargo by the jealous people of Alexandria, they perfected parchment (the Latin word pergamena derives from Pergamon). The Metropolitan Museum has drawn from the immense collection of the Pergamon Museum in Berlin, as well as from other lenders, and has brought together nearly 300 objects to represent what was a Golden age with mosaics, gold work, bronze statues, cameo of which the famous Vienna cameo, and much more.
 Pergamon and the Hellenistic Kingdoms of the Ancient World at the Metropolitan Museum, from 18 April to 17 July 2016.

MARSEILLE - Picasso a movie director? That is one talent we did not know of. And yet it is proven in a surprising animation movie, shot by ceramist Robert Picault (1919-2000). It is actually a tour de force of Picassos who recreated the characters of a corrida, staged in a 6-minute sequence. It is one of the jewels of this exhibition that proves the unfathomable reservoir the artist found in folk arts and traditions. Bullfights, music or clothing (the Catalan barretina, a cap that became the symbol of the resistance to fascism), the circus, childrens toys: everything filters into his creation. Picassos creations paintings, sculptures, ceramics, cut sheet metal - are put into perspective by the objects of the MuCEMs collection. Some of the former are rare, like the Petit Picador from 1889, his first known painting (he was then 8 years old!), his four ceramic squares signed together with Derain in 1914, the projects for earrings with François Hugo. We feel this superstar of modern art had a familiarity with daily objects and poor materials that justifies the remark by Michel Leiris, used as the title for this exhibition.
 Picasso, un génie sans piédestal (Picasso, a genius without a pedestal) at the MuCEM, from 27 April to 29 August 2016.

Sawada, a look behind the looking glass

Sawada Mitsuharu (born in 1947), represents a generation of artists who are astride two continents. An adolescent in the poorer suburbs of Osaka where one had to know how to use ones fists, graduated from the University of Kyoto and then from the Royal academy of Fine Arts in Brussels, he first built his reputation on a flawless hyperrealism. Paul Delvaux took note of his talent while he assimilated the technique of the old Flemish masters whom he reproduced in his figurative compositions women at their windows or perfect flowers. A personal cross to bear  an illness that almost paralysed him and his cure through martial arts (of which today he is a well-respected master) pushed him to look behind the attractive appearance of things. His recent production seems to be the exact opposite of his first period: large monochrome paintings, dotted with minute accidents, small reliefs, unnoticed shadows. A sort of symphony on matter, on illusion, on the plenty and the void: this is almost an exercise of philosophy.
 Sawada is presented at the galerie Nichido (61, Faubourg Saint-Honoré, 75008), from 21 April to 28 May 2016.

40 years of the gallery

Markus Raetz, Joel Fisher (photo), François Boisrond are among the artists put forward for this celebration

To explore Babylon, Pergamon, or the cities of the antique Orient was no easy task at the time of the pioneers. Nor today for that matter. What was the hidden side of those missions, how were they organized, financed or prepared? How were the discoveries or the memory of the expeditions transmitted? This catalogue that accompanies an exhibition until 19 September delved into the treasure of the Archives nationales to unveil the secrets of great voyageurs between 1800 and 1960. Every day adventures and misadventures included illnesses (list of those who suffered from scurvy on the Géographe during the Baudin expedition in 1801 to the island of Mauritius), material problems (photos of the Faidherbe, the portable steam boat which the Marchand Congo-Nil expedition in 1896-99 placed on each water way) and more serious dangers (note from the ministry of Foreign Affairs on the murder of Dutreuil de Rhins in Tibet in 1894). A few very moving lots give a more contemporary aspect to the whole: the letter from candidate Paul Emile Victor to board the Pourquoi pas ? of commander Charcot in 1933 or, forty years earlier, the one from Gauguin who wished to be entrusted with an artistic mission to Tahiti.
 Des voyageurs à lépreuve du terrain, Archives nationales, 2016, 200 p., 25.

ALLIGNY-EN-MORVAN - The musée des Nourrices, which is part of the Ecomusée of the Morvan region, will be inaugurated on 29 April 2016.

CAUDEBEC-EN-CAUX  Muséoseine, dedicated to the Normandy part of the Seine, will open on 30 April 2016.

DAKAR  The 12th Biennale of African contemporary art (Biennale de lart contemporain africain) will be held from 3 May to 2 June 2016.

MONTPELLIER  The Boutographies, the photographic encounters of Montpellier, will be held from 30 April to 22 May 2016.

MONTROUGE  The 61st salon dart contemporain de Montrouge (contemporary art fair) will be held from 4 to 31 May 2016.

PARIS - François Pinault announced together with Paris Mayor, Anne Hidalgo, that as of 2018 and following a transformation by architect Tadao Ando, the Bourse de Commerce (commodity echange) will welcome his collection for a 50 year concession period.

THE MAYA LANGUAGE OF BEAUTY

BERLIN - This exhibition at the Martin-Gropius-Bau shows the magnificent artistic forms of expression of the Mayas. With a collection of around 300 works of art, including many Mexican national treasures, it displays the fundamental aspects of pre-Hispanic art: the body and the physique are central to this exhibition.