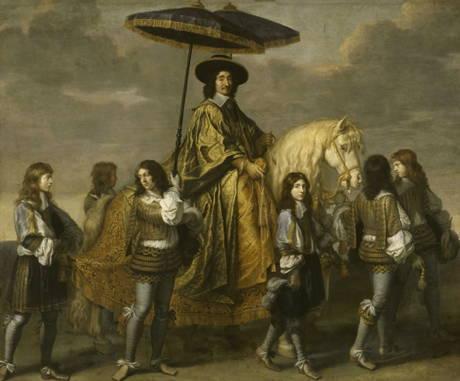 A new perspective on Le Brun

LENS  In his time he was uniquely famous: he was the founder of the Académie de peinture, Fouquets favorite  he decorated Vaux-le-Vicomte for him -, he then became Court painter for Louis XIV, for whom he coordinated the cycles of the Grands Appartements and the Hall of Mirrors at Versailles. Louis Le Brun (1619-1690) was also the director of the tapestry workshops of the Gobelins for nearly thirty years. When he died he left a fortune estimated at 550 000 pounds, a colossal amount for a painter. Nevertheless, the man who shaped art during the Grand Siècle (XVIIth century) is almost forgotten today, less known than Poussin, with whom he traveled to Italy, less known than Georges de la Tour, Lorrain, or even Simon Vouet. The Louvre Lens intends to make up for this outrage by showing he was more spontaneous, human and sensitive than what we think. His restored works unveil warm colours and the paintings of his later years show that as he fell into a semi-disgrace in the Kings eyes, he finished his life doing small moving paintings for him. Fifty years have passed since the last retrospective (1963), and the time has come to appreciate the champion of the academy in another manner.
 Charles Le Brun, le peintre du Roi-Soleil at the Louvre Lens, from 18 May to 29 August 2016.

VENICE  If we were to translate his family name, Selvatico, we would have Savage. Yet there is nothing savage in the art of this worldly painter from the Italian Belle Epoque, with his perfectly Venetian blond hair. He died as a true lover of progress, in a motorcycle accident in 1924, at age 52. He left behind, in the likes of Boccioni or, in France, of Braïtou-Sala (shown at the Piscine de Roubaix), portraits of beautiful muses. Actresses like Irma Grammatica, or countesses like Annina Morosini, who paraded in beautiful clothes, accompanied by a greyhound, a cat or a large flower bouquet. He was used to rubbing elbows with the aristocracy - as his father was mayor of Venice from 1890 to 1895 and was one of the promoters of the first Biennale, launched in 1895  but also signed a few sensual portraits. He had been forgotten since his retrospective in 1926, but now comes out of oblivion, partly due to loans from his descendants.
 Lino Selvatico, une seconda Belle Epoque at Ca Pesaro, from 14 May to 31 July 2016.

PARIS  The least we can say is that the fact of having had famous disciples (Bazille, Sisley, Renoir, Monet) did not help his own renown. Charles Gleyre (1806-1874) was very appreciated in Paris salons. But the city of Lausanne, in his native country, bought the painters workshop at the beginning of the XXth century. And this great admiration prevented works of his from being shown elsewhere! Fortunately, renovation works at the museum of the canton of Lausanne have allowed some of the painter's works to travel and be shown elsewhere, so all may admire the palette of this remarkable artist. He was a Romantic deep inside, but contained his young impulses to paint darkness and violence (Les Brigands romains, a scene of a disguised rape that caused a scandal in 1831) and mythological scenes (Le Soir, 1843), often of silky-smooth eroticism. Like his contemporaries, he also left beautiful watercolours of the Orient that exhausted him and almost blinded him during a four-year trip (1834-38).
 Charles Gleyre, le romantique repenti at the Musée dOrsay, from 10 May to 11 September 2016.

BONN - Hermann Pückler-Muskau (1785-1871), a Prusiian count, had a very adventurous life. He volunteered in the Prussian army at the time of the Napoleonic wars, after that was governor of Bruges. But he is known above all for being a landscaper. The garden on his property of Bad Muskau, near Dresden, on the current border with Poland, is on the list of the world heritage classified by Unesco. He introduced the English-style gardens, was a non-conformist, brought an Egyptian companion back from his travels to the Middle East, and is the author of Aperçus sur lart du jardin paysager, an instruction book that is still valid today. The exhibition sums up his beliefs with drawings, first editions and photographs of his creations, in Babelsberg and Branitz.
 Parkomania, The Landscaped Gardens of Prince Pückler at the Bundeskunsthalle, from 14 May to 18 September 2016.

PARIS - Jean-Jacques Henner (1829-1905) is what we call a mandarin of painting. He was awarded the Grand Prix de Rome, was a member of the Institut, was regularly honoured at the Salon, and swanky clients rushed to his workshop on place Pigalle, hungry for his mundane portraits (he did almost 400 of them). He was also a landscape and history painter, and was one of the pompous pompiers artists of his time who were quickly swept aside by History. Luckily his memory lives on thanks to his niece who bought in 1923, in the heart of the Monceau area, the former home of painter Guillaume Dubufe, which she converted into a museum to the glory of her uncle. The house was renovated, a pleasant winter garden was added, and today it presents nearly 300 works among which the very political LAlsace. Elle attend, (Alsace is waiting), painted after the region was taken over by Germany, or lighter nude nymphs on a grass carpet.
 The Musée national Jean-Jacques Henner will reopen on 21 May 2016.

A tribute to Honoré

He was part of the team at Charlie Hebdo, all murdered during the attack on 7 January 2015. While he was not as famous as his colleagues Cabu or Wolinski, Philippe Honoré (1941-2015) was since 1992 one of the pillars of the magazine where he developed a very personal style, referring to linocuts and engravings on wood, with their dark blacks, their wide lines and a stencil-styled signature. He combined his technique with a wide culture and a very caustic sense of humour. As an example, regarding an oil spill in the Galapagos, where we can see Darwin with his hands in the oil, the legend says, Well, here is the origin of the end of species  Honoré unwillingly disappeared with a very prophetic drawing in which we see Al-Baghdadi, the leader of the Islamic State, wishing everyone a Happy New Year and adding And good health!! We would have liked to learn more about the character and his itinerary, including his training as an industrial drawer.
 Petite anthologie du dessin politique, Honoré, éditions de La Martinière, 2016, 288 p., 25.

"We wanted to put literature outside", the authors wrote. But in the good sense of the word: plaster it on walls, on the sidewalks, on streets, on cement blocs, in prison, etc. Karelle Ménine and Ruedi Baur carried out the project "The Sentence". It was one of the major moments of Mons 2015 (the cultural capital of Europe). These 10 km of poetry, of philosophy and of revolt, were taken from Verlaine, Lacan, and even from the poet Fernand Dumont, who died in 1945 in Bergen-Belsen. They started in the train station and arrived there, like a letter train, and they scattered all over the town. As in the case of Desnos' 18-meter long ant, others will think later this was fiction. Fortunately this book exists, describing the procedure, the administrative difficulties and the participation of unexpected characters such as Patti Smith.
 La Phrase, une expérience de poésie urbaine, by Karelle Ménine and Ruedi Baur, éditions Alternatives, 320 p., 19.

The artist (born in 1978) studies concepts of memory and remembrance

CHARTRES - The Compa museum, dedicated to agriculture, will reopen on 21 May 2016 after two years of renovation works.

EUROPE - The European Musem Night will be held on 21 May at night.

PARIS - The Netherlands college at the Cité International (the International university Campus in the XIVth arrondissement), the only building in France by modernist architect Dudok (in 1927) was entirely renovated and inaugurated on 17 May 2016.

ZURICH - Videoex, the experimental video and movie festival, will be held from 24 to 29 May 2016.