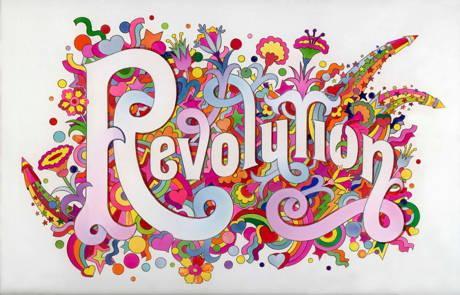 According to Oxfam, which presents these figures every year at the convention of the powerful in Davos, in 2010 388 persons owned as much wealth as the poorest half of humanity. In 2013, the club shrank down to 153 persons, and in 2015 to 62 persons. The wealthiest 1% of the worlds population owns as much as the remaining 99%. Doesnt this type of statistic push you to drive a revolution? Or at least a small revolt? Or does it simply incite you to dream of another world? When it means facing strong sentiment, artists are good guides, especially in face of this type of dilemma.

LONDON - For those who lived those years, they were not always rosy-posy: with the tension of the cold war, the bloody fight for civil rights in the US (the murder of Martin Luther King in 1968), apartheid in South Africa, etc. Yet, in retrospective, the Sixties as sung by Gainsbourg and Birkin, by the Beatles (Hey Jude) or Simon & Garfunkel enchanted us! It took the Victoria & Albert Museum to choose a short five-year period, from 1966 to 1970, in order to bring back to mind the feeling of revolt and freedom that existed then. Demonstrations against the Vietnam War, political and moral freedom (Woodstock), creative freedom (music, painting, installations), freedom of movement, all the way to the Moon (a stone belonging to the NASA is shown). The exhibition is shown to the rhythm of Sam Cooke and Jimi Hendrix, it combines psychedelic posters, old vinyl records, photos and films. It is a surprising pot-pourri, including a shopping list drawn up behind the barricades in May 68 in Paris that mentions the returnable bottles. Definitely other times, other ways!
 You Say You Want a Revolution ? Records and Rebels, 1966-70 at the Victoria & Albert Museum, 10 September 2016 to 27 February 2017.

Provoke, to revolt, the Japanese way

PARIS - Over the abebooks website, the three first issues are on sale for 11 911.88. Issue N° 4 is not offered. For a good reason, it never existed. Provoke only put out three issues, hence no doubt its mythical status. The Japanese photography magazine was ignored when it came out in 1968, but it played a major role for new tendencies and triggered off Arakis career. The photographers of Provoke, among them Daido Moriyama, documented a society that was undergoing a crisis with its violence, its revolts (against US military bases as well as against the construction of the airport of Narita, a conflict that was intense though we have forgotten it) with raw, unpolished, rough images, with close-ups, dim lighting and blinding contrasts.
 Provoke, entre contestation et performance, la photographie au Japon, 1960-1975, at BAL, 14 September to 11 December 2017.http://www.le-bal.fr/

MARSEILLE - Walk softly, you are walking on my dreams, Irish poet Yeats wrote once. Many who build castles in the air could make that expression their own. What is a dream after all? An idea we harbour? An imagination without any foundation? An hallucination produced by a morbid state? Or something completely different, which the Larousse of the XIXth century made a list of? The musée Cantini invited a group of artists who we know practice this, Surrealists of course (Toyen, Ernst, Brauner), as well as Goya or Symbolists like Odilon Redon and Kubin, up to Philippe Ramette  to give a 180° idea of this highly human activity. And when we realise that we really dont know the origin of the word. It may come from Gaelic rabhd, drivel? From the Latin repuerare, to fall back into childhood? From ancient French desver, to wander? Dreams are also imagination, nightmares, and even the state of being awake: the exhibition looks into these different themes and leaves the door open. The word accepts no definition
 Le Rêve at musée Cantini, 17 September to 22 January 2017.

OTHER EXHIBITIONS THAT OPEN

BONN - The Rhine river, that unites or separates, has been interpreted by painters, sung by poets. The exhibition writes its biography in images, to the rhythm of Goethe and Victor Hugo (Illustration: Johann Adolf Lasinsky, The Rhine near Koblenze, 1828, © LVR-LandesMuseum Bonn. Photo: Jürgen Vogel.) At the Bundeskunsthalle, 9 September 2016 to 22 January 2017.

LYON - A cubist artist, therefore an iconoclast, who becomes a believer and the apostle of a type of religious painting, practiced in an isolated community? This not very ordinary individual is Albert Gleizes, who founded his utopic site Moly-Sabata, near the Rhône river in 1926. At the religious museum of Fourvière, from 15 September 2016 to 15 January 2017.

PARIS - He made self-portraits constantly, seeking humanity in his inner self and also in others. Drawings and engravings played a major role in his quest as the Rembrandt intimereminds us. At the musée Jacquemart-André, from 16 September 2016 to 23 January 2017

PARIS - A journey through Soviet and Russian art from 1950 to 2000: that is what theKollektsia collection, given by the Vladimir Potanin Foundation offers the viewer. At Centre Pompidou, 14 September 2016 to 27 March 2017.

The Beat Generation, or the need to get away from it all

What other cover than the endless road to represent them? To get away! There is one single car further away to give an idea of the scale of this photograph. This image by Robert Frank synthetises the Beat Generation, " of a generation of crazy, illuminated hipsters suddenly rising and roaming America, serious, bumming and hitchhiking everywhere, ragged, beatific, beautiful in an ugly graceful new way ()" as Kerouac wrote in an article published in Esquire in 1953. These divine beatniks, whose matrix was formed at the university of Columbia in 1943, who followed a pilgrimage between Paris, Tangers and Mexico, represent a type of freedom that reminds us of Rimbaud, with holes in his pockets and his nerveless rivers. The catalogue of the exhibition (open at the Centre Pompidou until 3 October 2016) includes collages, cut-ups, visual poems, performances, hallucinations under the influence of ganja or LSD. The Beat Generation goes beyond limits and leaves the future generations a type of total freeedom that is exalting and makes their heads turn and sometimes destroys them.
 Beat Generation New York San Francisco Paris, directed by Philippe Alain Michaud, 2016, 304 p., Centre Pompidou, 44.90

OSLO - The Triannual Architecture Event will take place from 8 to 27 November 2016.

THE WORLD IS WANTING A THOUGHT

The state of the world seen through the eyes of the artists (picture: Barthélemy Toguo)

Our selection of new exhibitions in galleries