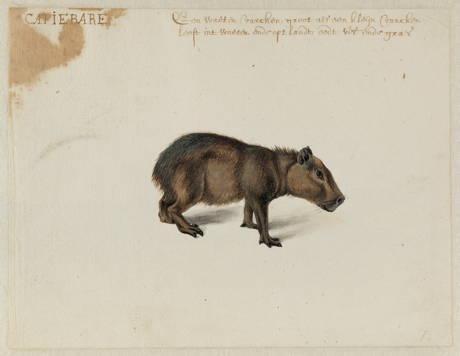 Brazilian wonders hidden in a box

AMSTERDAM  Who remembers the Netherlands colonised Brazil? Indeed, during a quarter of a century, as of 1630, a part of the Brazilian Nordeste belonged to them. The governor, John Maurice of Nassau, an enlightened man who only governed for seven years, opened a museum, a library and had artists come to describe the beauty of the tropics. The best known were Frans Post and Albert Eckhout, who left coloured canvases, full of luxuriant trees and strange animals, such as the six-banded armadillo. Since Frans Post (1612-1680) painted most of his works once he was back in the Netherlands, it was always thought he had worked based on drawings. But he was not known for any of the flora or the fauna. The curator of the archives of Haarlem (Noord-Hollands Archief) has just found the missing link as he was drawing up his inventory. He found 34 drawings of animals and plants from the New World with an identical matching series on the canvases. One clue convinced the art investigators: the capybara, a rodent, has a perfectly shining fur in the painting kept at the Louvre. In one of the corresponding drawings though, he is undressed since we can clearly see the traces of his collar. And this proves it was a simple observation sheet.
 Frans Post, Animals in Brazil at the Rijksmuseum, from 7 October 2016 to 8 January 2017.

Fra Bartolommeo, a man of the high Renaissance

ROTTERDAM - Here too we discover things through a traveling suitcase. Another exhibition in the Netherlands shows us the accidents of History. The Boijmans van Beuningen museum owns one of the most beautiful collections in the world of drawings by Fra Bartolommeo, the star of the high Renaissance period in Florence. It owes this to the free travels of three portfolios. His drawings had been forgotten in the convent of Saint-Catherine following the demise of the Dominican monk (in 1517), and were gathered in the middle of the XVIIth century by a clever merchant, Niccolò Gaburri. They then started their European wanderings that knew none of the borders men always wish to reinforce. One part of the drawings was scattered in 1957 but the other the most important -, was already in Rotterdam and tightly held by the museum and its founder, ship-owner van Beuningen. Before him it had belonged, among others, to king William II (1840-1849). This retrospective rests on drawings from other collections and gives a good space to religious altarpieces that had never before left Lucca in Tuscany.
 Fra Bartolommeo, The Divine Renaissance at the Boijmans van Beuningen museum, from 15 October 2016 to 15 January 2017.

AMSTERDAM - Hercules Segers (circa 1589-circa 1640) is a painter-engraver the public at large does not know well. But others worshipped him. In particular Rembrandt, who owned a number of his works. In a mysterious half-light, rhythmed by John Malkovichs voice, the visitor discovers the fantastic landscapes this visionary imagined, full of moss, leaves, crevices and invading cliffs. This native of the flat lands dreamt of mountains! A genius of engravings, Seghers was capable of producing surprising states by working on the plate or the print with very personal techniques. You get your moneys worth in this exhibition, regarding the paintings. The research to prepare the exhibition made his production go from 12 to 18: a 50% leap!
 Hercule Segers at the Rijksmuseum, from 6 October 2016 to 7 January 2017.

LONDON - Adriaen van de Velde is a painter who has been slightly forgotten. He died young (1636-1672), was a virtuoso of Dutch landscape painting as well as a delicate figure drawer. Seascapes, Arcadian scenes, farms and idealised peasants: the retrospective is the first of such a scope to be dedicated to him.
 Adriaen van de Velde at the Dulwich Picture Gallery, from 12 October 2016 to 15 January 2017.

CASSEL (France)  The Flemish artists from the Golden Century were remarkable nature artists. With their paint brushes they could reach impressive levels of reality in painting furs and feathers. Savery, Snijders, de Vos are grouped together here with an unlimited menagerie: mice, night butterflies, guinea fowl as well as doe, peacocks and leopards.
 LOdyssée des animaux at the musée de Cassel, from 8 October 2016 to 22 January 2017.

Claudy Jongstra, an artist in weaving

She experienced a true fairytale when, in 1999, after simply sending in a letter to the production, she was chosen to make some of the costumes in Star Wars Episode 1, and in particular the felt toga for Liam Neeson. Since then, Claudy Jongstra (born in 1963) has made a name for herself in her discipline, work on wool and other fibres, from the dyeing to the weaving, or not. After the great success of her large textile wall for the reopening of the San Francisco Museum of Modern Art, or her variation on onions, the symbol of infinity, its skin in a colour that is brighter than gold; she plays an active role in setting up Leeuwarden as the European cultural capital in 2018. She showed her last installation in the brand new museum of the capital of the region of Frise where she has settled -, Metaphoric Indigo, a rotonda that plays with the idea of blue and light. Another performance is plastered on the museum walls: the nearly 70 pages of the long interview of the artist by Louwrien Wijers, that lasted three days.  Claudy Jongstra is exhibited at the Fries Museum until 8 January 2017.

How the capital of Lebanon suffered and reinvented itself: a photographic portrait

We dont have to be in favour of the title - Colleen McCullough-like - that doesnt reveal anything about the content, unless it is under the form of an enigma. Because this book is less interested in nature than it is in the destiny of one of its great interpreters, Van Gogh. At his time some people had already questioned the theory of the suicide. It is not easy to shoot into ones left side, using your left hand. The novel develops this thesis: Van Gogh had nothing in common with a person suicided by society, he wanted to live, he was in good shape and had the high fever of creativity. So how did he die then? He was the victim of a passionate, his relationship with the daughter of Dr. Gachet, who loved him dearly. But things turned badly. There was an altercation, followed by threats, a weapon badly pointed, the shot went off  That credible version allows the author to describe the artists last days when in the hot summer in Auvers-sur-Oise, in July 1890, he rowed a boat, visited the Ravoux inn, wandered in the countryside and produced a painting per day. One person is not very nice as described by the author, Dr. Gachet. He is described as a family tyrant, stingy and embittered, so very different and even to the opposite of the placid rural doctor painted by Van Gogh. So who is right, the author or the painter?
 La valse des arbres et du ciel, by Jean-Michel Guenassia, Albin Michel, 2016, 304 p., 19.50.

COGNAC - The Martell Foundation was inaugurated on 13 October 2016 with an exhibition dedicated to Vincent Lamouroux.

GAND - After four years of renovation, the lateral panels of the altarpiece of the Mystic Lamb by Jan van Eyck are again visible in the cathedral of Saint-Bavon.

PRATO - The Pecci Center for contemporary art will open once again on 16 October 2016 with the addition of a building by architect Maurice Nio.