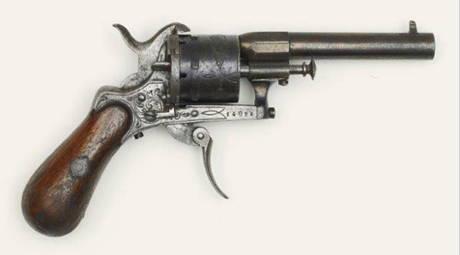 The revolver that almost killed Rimbaud

PARIS  Since you are leaving, take this! And the shot echoed through the hotel room. The bullet hit a first target and then dug into the floor. A second bullet was shot, immediately followed by a a scream. The bullet had hit the victims arm! This sounds like a rather ordinary affair. Except that in this given case the shooter was Paul Verlaine and the victim Arthur Rimbaud. It is 10 July 1873, it is very warm in Brussels and the absinthe has flowed, contributing to the local tension. Indeed, young Rimbaud has just announced to his lover that he is leaving him and going to London. This gunshot had major consequences on French literature. Verlaine, thrown into prison for 555 days in Mons, wrote some of his most beautiful poems, among them the collection Recently and Formerly. Rimbaud took refuge in his mothers house and produced A Season in Hell. With this type of consequence, one could almost request more skirmishes. The event comes back to us through an auction, since the pistol, Lefaucheux, which Verlaine bought that same morning for F23 at the shop of Montigny, at galerie de la Reine, still exists. Following the incident the pistol had been returned to the gunsmith who in turn had kept it until his business closed nearly a century later, in 1981. The owner and liquidator then safely kept it in a drawer. Todays nearly 70,000 estimate of the most literary of all guns -together with the one that went through Pushkin in his dual on 29 January 1837 against Georges dAnthès- is peanuts. Rather than see the object sit in the safe of some golden boy, it would be quite appreciated if the generous buyer were to donate it to the musée Rimbaud in Charleville. It would age there very nicely.
 The Exceptional Sale at Christies, 30 November 2016.

MADRID  We was referred to, derogatively, as The Little Spaniard (lo Spagnoletto) at the time he dazzled his sponsors in Naples where he lived for over thirty years. This did not prevent Ribera (1591-1652) from being great given his qualities in composition and dramatic tension  as seen in his Martyrdom of Saint Bartholomew, kept at the National Art Museum of Catalonia, in which the poor apostle is skinned alive. His drawings are less familiar to the general public. They are marked by a lighter touch, far from the influence of Caravaggio who made no preparatory drawing-, as he knew how to take advantage of the whiteness of paper. The catalogue raisonné lists 157 drawings of which a third has been brought together here, on loan from all over the world: London, Haarlem, New York, Bloomington, Providence or Mdina in Malta. Next to more recent discoveries, we find his favourite martyrs that gave him the reputation in the XVIIIth century of being a sadistic painter! But there are also figures of mythology and a surprising series of heads.
 Ribera, maestro del dibujo at the Prado, from 22 November 2016 to 19 February 2017.

NAPLES - Fabio Mauri (1926-2009) was an important artist at the end of World War II in Italy, who was interested in the mechanisms of totalitarism and in the use of it by ideologists of mass communication. He was from a great family of publishers, knew his subject well and explored it through the bias of installations, performances, projections. The Museo Madre dedicates an ambitious retrospective to this interesting artist. From 26 November 2016 to 6 March 2017.

MONTBÉLIARD - Under a poetic title, "The island of the happy ones", which refers to expressions used by pope Paul VI and chancellor Kreisky, the Musée des ducs de Wurtemberg explores two centuries of Austrian art, and the role of diversified cultural communities inside borders in constant movement. From 19 November 2016 to 5 March 2017.

Care for another piece of the Tuileries?

PARIS  Paris connoisseurs know the last stones from the Bastille are included in the construction of the Concorde bridge as well as in the castle of Vizille in Isère, in the windows of the hôtel de Ville that survived the fire in 1871(in the passage Gantelet), the shell of the Tuileries (a beautiful archway brought up in 2012 to the cour Marly at the Louvre and a god number of stones incorporated in the castle of la Punta near Ajaccio. Now they are given the opportunity to acquire equally important archaeological remains: two columns that belonged to the palace of the Tuileries, built by Philibert de lOrme for Catherine de Médicis during the third quarter of the XVIth century, and burnt during the period of the Commune. These limestone columns, bought by entrepreneur and demolition expert Achille Picart in 1882, like the rest of the ruins of the palace, were kept in the manor des Gandines, at Essarts-le-Roi. The buyer, after paying close to 250,000 (lower estimate), will not be allowed to cut them down into rings, since the two columns are on the list of historical monuments since 1989.
 Dessins anciens, tableaux anciens, mobilier at Drouot on 26 November 2016 (Auction Art Rémy Le Fur & Associés).

Without causing such extreme reactions as the caricatures of Muhommad, the iconoclastic works by Maurizio Cattelan (born in 1960) shocked a number of persons, and two in particular: pope John-Paul II overcome by a falling meteorite and Adolf Hitler on his knees at his First Communion, praying in his tweed suit. Cattelan, who had promised not to exhibit again after his definite retrospective at the Guggenheim in 2011, follows in the footsteps of Messi and other famous football players who swallow their words and put an end to their international retirement. In the XIXth century decors of la Monnaie de Paris, reinforced by red velvets, he presents all his periods, except his un-showable performances (such as his Oblomov foundation, which financed artists who accepted to never produce). Next to the provocative aspect, the autobiographic dimension is clear: whether hanging from a cornice, or sticking his head out of a cellar or lying on a bed, Cattelan is present everywhere. His selfies have the virtue of being perfect wax reproductions and not mediocre fuzzy images. The title of the exhibition is enigmatic but supposes that the lack of love does not help our world.
 Maurizio Cattelan, Not Afraid of Love at la Monnaie de Paris, until 8 January 2017.

From Hans Bellmer to Picasso, different visions of woman

As her spiritual envelope becomes increasingly frail  she is now 93 years old -, her interior light shines increasingly towards those who surround her. These words written by her son  Buddhist monk Matthieu Ricard  can also apply to her painting. Yahne Le Toumelin, in her non-figurative style which we could call lyrical abstraction, proceeds like the painters of icons, taking paint off in order to reach a certain balance. Her storms, her gusts of wind, her rain, her aurora borealis, her mineral surfaces  which each person may freely interpret  joins the art of her friends Mathieu, Soulages and Zao Wou-Ki. But as this book reminds the reader, she also had a Surrealist period under the wing of André Breton (who exhibited her work in 1957) after learning her art from André Lhote. Her life had a major influence on her work: she was the daughter of Britton sailors, was the first wife of Jean-François Revel, was very influenced by her trips to Mexico, Tlemcen, Darjeeling and Bhutan, she merged classical techniques with Buddhist illumination. And she continues to do just that in her tenth decade.
 Lumière, rire du ciel, Yahne Le Toumelin, by Matthieu Ricard, published by La Martinière, 2016, 144 p., 50

PARIS - The 2016 LEquerre dargent architecture prize was given to the agency Muoto, for their Lieu de vie at Gif-sur-Yvette and Rudy Ricciotti for the memorial of Rivesaltes.