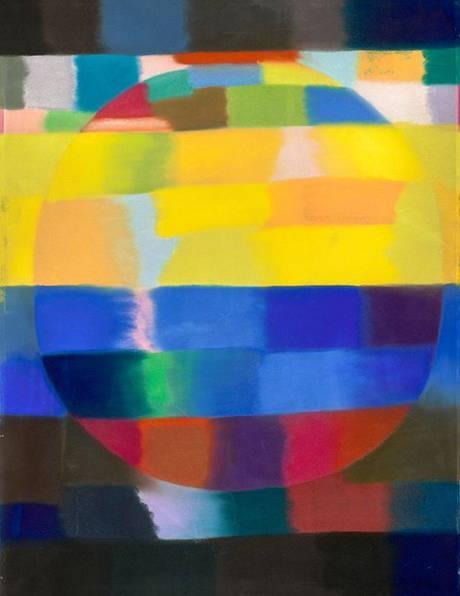 Freundlich, a martyr of the Third Reich

COLOGNE  The artist had not enjoyed a true retrospective in forty years. The Ludwig museum decided to correct that blunder and focuses on the case of Otto Freundlich (1878-1943). Contrary to other persecuted artists, this lover of abstract art, as well as a fervent Communist activist did not survive the Nazi hell. After living for a long time in France, he was deported as a Jew and died in the camp of Majdanek while a great part of his work wasdestroyed. One of his sculptures, a primitive head, had actually been used for the cover of the brochure that accompanied in 1938 the exhibition on degenerate art and came to be the symbol of the production of these banished artists. This apostle of applied arts used painting and sculpture, as well as stained glass or tapestry to express himself. Aside from the loans from the museum of Pontoise that kept the contents of the artists workshop, one of the major pieces of the exhibition is the mosaic of the theatre of Kohln (Naissance de lhomme, 1919), which survived the war by sheer miracle.
 Otto Freundlich, Cosmic Communism at the Ludwig museum, from 18 February to 14 May 2017.

From Moscow with love

LONDON - Lenin, Stalin, Trotsky and Zinoviev, of course. As well as Chagall, Malevich and Kustodiev. This fall the one hundred years of the Russian Revolution, a real artistic melting pot, will be celebrated. From Rodchenkos photographs to Tatlins constructions, including the tireless activity of the poster artists, this exhibition offers us a wide choice. Among the many surprises, there is Lenins coffin, painted by Petrov-Vodkin in 1924, a work that was almost disturbing at the time, as Lenin was thought to be eternal, and today it would be considered out of date  as the Orthodox religion once again fills in the needs of faith-. Consequently the Tretyakov gallery rarely shows it.
 Revolution. Russian Art 1917-1932 at the Royal Academy of Arts, from 11 February to 17 April 2017.

Lotar, not only a Surrealist

PARIS  A friend of the Surrealists and the companion of Germaine Krull, Eli Lotar (1905-1969) is mostly known for his surprising images of the slaughterhouses of la Villette. But his diverse talent goes way beyond that talent. From Rumanian origin, he settled in Paris, was the assistant of Buñuel in an unforgettable documentary (Tierra sin pan), a columnist on technical breakthroughs (locomotives and polders in the Netherlands), a friend and collaborator of Antonin Artaud for whom he produced photomontages for the stage, and even an observer of social misery in his remarkable movie dedicated to Aubervilliers in 1945.
 Eli Lotar at the Jeu de paume, from 14 February to 28 May 2017

Malta, the daughter of the sea

BRUSSELS  The title of the exhibition is in English  Land of Sea- as it doesnt sound as definite in French. But as it shows, the subject is the relationship of the island between Europe and Africa, with the Mediterranean. Of course the knights are present, but before them the megalithic culture and after them Napoleon, Nelson and the heroic defense under the bombs of World War II.
 Malta, Land of Sea at Bozar, from 17 February to 28 May 2017.

FRANKFURT  How can we represent the third dimension on a flat surface? This question has intrigued artists since the beginning of time but those in the XXth century gave new answers through abstract art. A selection of thirteen artists, from El Lissitzky to Sol LeWitt, shows the variety of paths the artists explored.
 Into the Third Dimension at the Städel Museum, from 15 February to 14 May 2017.

LONDON  He is one of the popes of English Pop Art. In spite of his name of Roman origin, Eduardo Paolozzi (1924-2005) represented Great Britain a number of times at the Biennale in Venice. Here are some 250 works, including bronzes, collages and posters in exuberant colors.
 Eduardo Paolozzi at the Whitechapel Gallery, from 16 February to 14 May 2017.

Bosch on the lagoon

VENICE  One year after the celebration of the 500th anniversary of the death of Hieronymus Bosch, Venice is showing off its treasures by the Flemish painter that have just been renovated: the polyptych and the two triptychs kept at the Gallerie dellAccademia.
 Bosch e Venezia at the Palazzo Ducale, from 18 February to 4 June 2017.

We all remember his monumental monograph of Matisse, which he refused to have published in a paperback edition in order to protect the illustrations. But Pierre Schneider (1925-2013) had a double doctorate from the Sorbonne (in art history) and from Harvard (in Romance languages), was an erudite, specialized in Baudelaire and the translator of de Quincey. He was interested in Byzantine art as well as in the graffiti in the New York subway. The new publication of his columns that appeared for over thirty years in the LExpress (1960-1992) show a clear way of writing and a sharp mind. In one of the articles he cries his rage against the waste of les Halles in Paris, in another one he is full of enthusiasm (in three articles of a length we dont see anymore!) on the renovation of the hospital if Santa Maria della Scala in Sienna. Though it was just the beginning, he had already foreseen the dictatorship of temporary exhibitions at the expense of permanent collections in the major museums, showing explicitly their generalized wish to go from the status of Kunstmuseum to that of Kunsthalle. And he would conclude with a pessimistic phrase: Today quality no longer guarantees success; tomorrow, quantity will suffice.
 Le droit à la beauté, chroniques de LExpress (1960-1992), by Pierre Schneider, Hazan, 2017, 288 p., 25.

KARSLRUHE - The contemporary art fair Art Karlsruhe is being held from 16 to 19 February 2017.

PARIS - The Salon des artistes français is being held from 15 to 19 February 2017 at the Grand Palais.