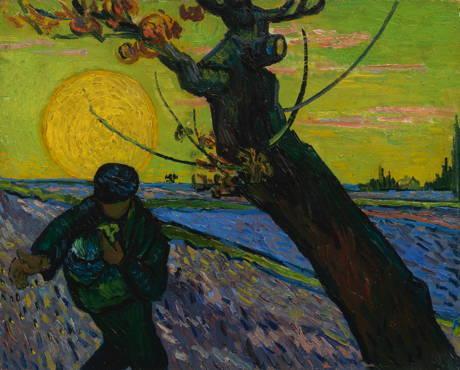 PARIS  The current director of the musée dOrsay, Guy Cogeval has just stepped down. For his last production, this music lover and amateur of synesthesia, delves into the theme of landscapes. It is not the concrete and realistic landscape as much as the mental, ideal and symbolic one. The type painters sometimes created practically in a trance. From the Nabis with their big red trees to Georgia OKeeffe and her beloved New Mexico reduced to its essence, from Van Gogh and his Starry Night to the Franciscan visions by Dulac, and last but not least, the tortured landscapes by Paul Nash or Vallotton, this initiatory journey holds a number of discoveries. There are vigorous images of the North with the Canadian artists from the Group of Seven or Danish artist Willumsen and his amazing sculpted painting, as well as from the South, with the strong lights of Italian artists Morbelli, Casorati and Pellizza da Volpedo. The grand finale carries us to the sound of music towards the cosmos, where the spirits of the dead spin indefinitely.
 Au-delà des étoiles, le paysage mystique at the musée dOrsay, from 14 March to 25 June 2017.

LONDON  Which Sebastiano are we referring to? Not the saint who died in the gutter after surviving a deluge of arrows. Here our interest is focused on the delicate Venetian painter the English, who adore him, continue to refer to by his first name. Sebastiano del Piombo (1485-1547) was a great friend of Michelangelos and worked with him on many projects. The list is summarized here. One of them has been among the masterpieces of the National Gallery since 1824, The Raising of Lazarus. The future pope Clement VII, a Médicis, commissioned it for the cathedral of Narbonne where he was archbishop. In 1722 it was given to the Regent, Philippe dOrléans, when he financed works in the cathedral. When the collection ended up in London during the revolutionary turmoil in France, a powerful collector born in Saint-Petersburg, John Julius Angerstein, one of the bosses at Lloyds, bought it. The history of art crosses the road of History since and here like elsewhere it follows the summary of the upheavals in Europe.
 Michelangelo & Sebastiano at the National Gallery, from 15 March to 25 June 2017.

Recipe for a golem

PARIS  Take a bit of earth, model it and give it the name of God. It will then start to move and will obey you blindly. Such is the recipe for a golem, a being already mentioned more than two thousand years ago in the Old Testament and made fashionable once again by writers such as Gustav Meyrink, who accustomed it one hundred years ago to Jewish part of Prague, which was such fertile territory for esoteric mysteries. The exhibition traces the adventure of the prehistoric robot, which continues to inspire creators of set or mobile images  among them some of our contemporaries such as Garouste or Amos Gitaï who feminizes the golem by giving it the traits of Annie Lennox. Among the worthy heirs of the Expressionist essays by Paul Wegener, the British troop 1927 has produced a jewel of a play  soberly called Golem, with remarkable graphic work.
 Golem ! Avatars dune légende dargile at the musée dart et dhistoire du Judaïsme, from 8 March to 16 July 2017.

OBJECT OF THE WEEK

PARIS  Spring is the season for flowers. Because of that, it is also the perfect season for bucolic events. The Grand Palais presents « Jardins »(Gardens) in which it traces the representation of nature from Durers remarkable clumps of grass up to Lionel Estèves happy watercolors. Paintings, herbaria, maps of French-style gardens and installations -among them a lovely Grotta Azzurra by Othoniel - stand next to surprising objects. The most outstanding are maybe the pair of flowers by the Blashka father and son. These craftsmen from Dresden - Leopold (1822-1895) and Rudolf (1857-1939)  had magical fingers and blew wonders that could justify the saying according to which Nature imitates art! Even when we stick our eye to the glass pane that protects it, we cant believe that this Rudbeckia hirta (Black-eyed Susan) is made of glass. The first director of the Harvard University museum, George Goodale, showed brilliant foresight when, in 1886, he commissioned the Blashka duet to produce a colossal series of plants, algae and mushrooms to be used for teaching. When it was completed in 1936, the collection included 4300 different models! Lucky visitors can admire the 780 different species at Harvard in their elegant, waxed wood display cases, which were just restored in 2016. Other visitors can get an afore-taste in this exhibition.
 Jardins at the Grand Palais, from 15 March to 24 July 2017.

PARIS  Our hand and its opposable thumb is one of the secrets of our control over the universe that surrounds us. It truly deserves that we develop a passion for it, just like Régis Lisfranc did professionally as a surgeon. He is one of the founders of the Institut français de chirurgie de la main. His interest continued during his time of leisure and the doctor accumulated over a 35 year period a collection of hands: drawn, painted, sculpted in wood or wax, originating from Egyptian sarcophagi or Roman statues. There is a remarkable pair of tongs for toast in fruitwood, a hand for reading the Torah, an ink painting by Léopold Survage, a pencil drawing by Bellmer called Caresse intime(Intimate caress), a self-portrait of Topor with deformed hands and even more surprising, the X-ray of a hand with a ring. It is that of the wife of Dr. Röntgen, the inventor of the X-ray, as she was the only person who dared place her beautiful hand on the plate.
 Collection du Dr Lisfranc at Drouot-Richelieu (Binoche & Giquello) on 20 March 2017.

PARIS  It can be very tempting to bring together two artists, regardless of their time or their genre, just to see the sound box that can result from this. We all remember the particularly convincing Van Gogh-Artaud. As the centennial of Rodins death approaches, it is Anselm Kiefer, one of the most important artists of contemporary art, who was asked to measure himself to the one he himself calls the stroller between worlds. While the exhibition has left most viewers with a tepid impression due to the fact that the works of each artist were not put face to face, but were simply shown in different spaces, the catalogue, on the other hand, really works like an echo, like a sound box. When Kiefer takes a hold of a theme as nationalistic as the cathedrals in France and decides to marry it to any architecture, an erotic one  that of a woman in a form that is familiar to him, on huge books in plaster. The workshop is very important to both artists and it is equally dealt with here with impressive images of the spaces in Croissy and Bajarc that represent for Kiefer the same role of a laboratory as it had for Rodin. At a time when primary tensions on identity, in a continent -Europe - that seems to have a suicidal wish to disintegrate, the essays deserve to be read. In a dialogue, Kiefer has a brilliant phrase that deserves to be meditated: It was in France that I became German. The exhibition is presented at the Musée Rodin until 22 October 2017. It will then travel to the Barnes Foundation in Philadelphia.
 Kiefer Rodin, Gallimard, 2017, 288 p., 35.

A painting that seems to stem from deep coral reefs