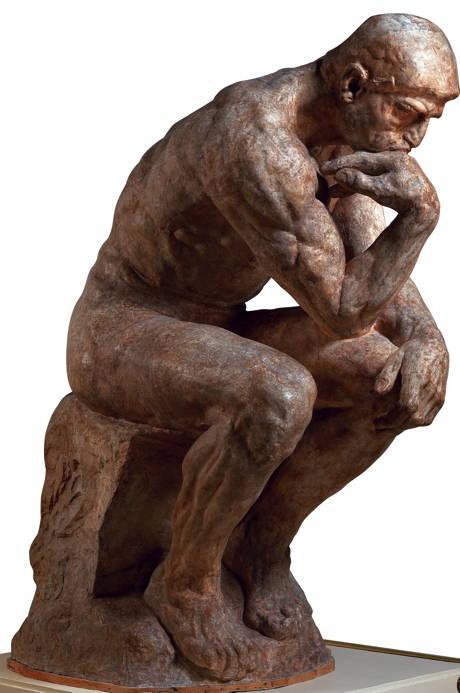 Rodin, the centennial of a giant

PARIS - In 1902, when Rodin was 62 years old, he was invited to Prague and was welcomed like a superstar: in the Manès gallery, 88 of his sculptures and 75 of his drawings attracted the crowds. The decade had started with his large exhibition at the pavillon de lAlma, in 1900, which he mounted all alone at the time of the Universal Exhibition. He was considered a European value more than solely French. His secretary was Austrian poet Rilke and a great number of his most passionate students came from other horizons, like Scottish Ottilie McLaren or Croatian Ivan Mestrovic. This can only encourage those of this old continent who will discreetly celebrate on 25 March the 70th anniversary of a fragile union. Rodin did not care much about frontiers, neither the ones between countries but even less those between forms of art. The retrospective for the centennial shows his obsession to explore new fields until the end of his life, in volume, in drawing or in photography. At the age of 70 he produced surprising collages or ready-made, by setting up for example a plaster sculpture in an antique vase, or by playing with the concept of the unfinished and forgetting a hand or an arm. The influence of Rodin, seen in a whole generation -Bourdelle, Maillol, Lehmbruck-, petered out when the avant-gardes of Abstract Expressionism and Pop Art appeared. His influence appeared again in the 60s, with Dodeigne or Beuys, until today when Marcheschi, Lüpertz and Baselitz gladly refer to him.
 Rodin, lexposition du centenaire at the Grand Palais, from 22 March to 31 July 2017. Catalogue RMN Grand Palais, 400 p., 49 .

PARIS  We all know her as being Picassos first wife. Certainly not his first companion as the artist from Andalusia was rather precocious in that field. The Spanish painter met the dancer from the Ballets russes, Olga Kokhlova (1889-1955), in the winter of 1917 in Rome. He had gone with Cocteau to work on the decors of a ballet, Parade, which was to be presented by Diaghilev a few months later in Paris. The love story was very brief  a few years at the most. As of 1921, set up in a bourgeois comfort of rue La Boétie, the father of a small boy, Picasso suffocated near this woman who was uprooted and whose family, back in Russia, was caught in the horrors of the Revolution. She had abandoned dance for him. The exhibition shows how the muse of the beginning, who inspired an Ingres-like vein and then a neo-classic one, slowly transformed into a frightening, castrating companion  his portraits of her are reduced to a ferocious face with sharp teeth. Picasso delved in other relations, first with Dora Maar, then with Marie-Thérèse, with whom he had another child, born in 1931, and definitely left her in 1935. Olga was crushed by this marital failure and slipped into deep nostalgia, wrote Picasso almost every day of her life, and slowly died over a twenty-year period.
 Olga Picasso at the Musée Picasso, from 21 March to 3 September 2017. Catalogue Gallimard, 312 p, 39 .

BREMEN  He was one of the representatives of German expressionism, next to Otto Dix, later of New Objectivity, before evolving towards magical realism. Even though the Nazis considered him one of the degenerate painters, Franz Radziwill (1895-1983) was considered by others as the representative of Nationalist art (Carl Hofer nicknamed him Naziwill!). The heart of the exhibition is his attachment to Bremen, where he was born and studied. We see urban emblems, pipelines and water towers. This is an opportunity to rediscover an artist who has been widely forgotten outside of Germany.
 Franz Radziwill and Bremen at the Kunsthalle Bremen, from 22 March to 9 July 2017.

LONDON  It was not foreseen that this exhibition of his portraits would be considered as a posthumous tribute. Howard Hodgkin (1932-2017), one of the most valued British artists of the post-war period, with a dazzling palette, died a few days before the opening, on 9 March. He is considered mostly an abstract artist, but he also produced portraits, of which a selection is gathered here.
 Howard Hodgkin, Absent Friends, at the National Portrait Gallery, from 23 March to 18 June 2017.

PARMA  He experienced the Futurist period and then gave free rein to his obsession for a total art, combining furniture, tapestry and advertising. With that aim, Fortunato Depero (1892-1960) created a true Casa darte (art home) in Rovereto and even an antenna in New York, the Depero Futurist House, between 1928 and 1930.
 Depero il mago at Villa Magnani Rocca, from 18 March to 2 July 2017.

Ballen and Lemmen: the return of the cadavre exquis

PARIS  The favourite game of the Surrealist artists was to write poems or draw drawings consecutively among a number of participants, each one continuing the creation without knowing what the previous one had traced or written. South African photographer Roger Ballen and Dutch drawer Hans Lemmen have invented their own version. They demonstrate perfect iconoclasm at a time when intellectual property has become sacred and freely cut, reframe, glue and copy the others work to integrate it into theirs. This surprising score, including compositions of classic formats as well as an entirely painted room-grotto, gives disquieting results in which human and animal, normal and abnormal merge into one unique genre.
 Roger Ballen et Hans Lemmen, Unleashed at the Musée de la Chasse et de la Nature, from 7 March to 4 June 2017. The exhibition will be shown at the Bonnefantenmuseum in Maastricht in 2018. Catalogue Kerber, 144 p., 38  (in French and English).

Raoul Dufy had two moments of glory: his Fauvist period from 1905-1906 next to Matisse and Derain, and the 1937 International Exhibition in Paris with his monumental, Fée Electricité. Between the two, during a third of a century, the Normand painter (1887-1953) led a rather discreet career in comparison to many of his colleagues as far as easel painting is concerned. To live he worked on applied arts and for over 15 ears  from 1912 to 1928- he produced a countless number of motifs for silk manufacturer Bianchini-Férier. That activity did not exhaust his happy and colourful inventiveness. He also choreographed certain ballet scenes with Cocteau, designed panels for the famous houseboat of couturier Paul Poiret at the Exhibition of 1925, made frescoes for the homes of wealthy sponsors (like the one for doctor Viard, on boulevard Péreire in Paris), or decorations for steamers. Together with pottery artist Artigas, they produced gardens for living rooms, small, very naive ceramic compositions in which one could place plants or cut flowers, or even tapestries. The catalogue of the exhibition at the Palais Lumière in Evian  open until 5 June 2017 - shows this festival of colour in all fields which in the long run weighed on his reputation, giving him an aura of dilettante which Picasso, who was just as bulimic, never had to face.
 Dufy, le bonheur de vivre, directed by Olivier Le Bihan, Snoeck, 2017, 192 p., 35.

A tribute to the creator of the Smurfs

KATHMANDU - The contemporary art Triennale is being held from 24 March to 9 April 2017.