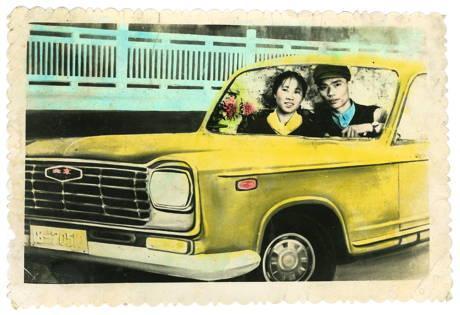 The automobile, a sweet song

PARIS  We are well aware that cars pollute, waste rare resources, de-structure old urban centres, and ruin the landscape. But we must also admit that they have a certain beauty and that they have always stimulated artists creativity. This is the aspect this catalogue (and the exhibition at the Fondation Cartier, until 27 Septembre 2017) has chosen to explore. We expect to see Lartigue shooting the races at the Automobile Club de France, or a few remarkable American models from the sixties or even Rossellini and Delon driving a Ferrari and thus illustrating the organic link between movie stars and cars. There is all of that, and a lot more. Doisneau shot some very original ads for Simca  after having worked for Renault. Fifty years later, Sugimoto and Valérie Belin took photographs of spare parts washed up on a beach in New Zealand, or immaculate motors, as if they were true objects of contemplation. The car can be seen from under  as done by Michalak and Völker -, from the side  the stroboscopic views by Andrew Bush. We can study its deathly itineraries, as in the series Karambolage by Arnold Odermatt on accidents in Switzerland, or even make it slip out of the frame. Cars have left so many scars - or tattoos if you prefer - on our planet. We have the parking lots seen from the sky and their geometric compositions as shown by Ed Ruscha, the roads launched like shears through the horizon of the Wild West, as displayed by Alex Mac Lean, or the monstrous interchanges Sue Barr captures in Naples that ridicule an Art deco palace by making it look like a childs toy in the shadow of the concrete monster. Matteo Pérez Correa increases that difference in his own way by taking close-ups of sheet metal that is crashed, rusty or faded. We then see surprising imaginary landscapes, close to kin with the Tuscan stones Roger Caillois examined.
 Autophoto (in English), under the direction of Xavier Barral and Philippe Séclier, Fondation Cartier pour lart contemporain/Editions Xavier Barral, 464 p., 49 .

As the authors remind us, Milano has been labelled since the 16th century as the ugly duckling regarding cities. How can this be the case for a city that is one of the world capitals of design? This apparent paradox encouraged author Karl Kolbitz, a native Berliner, to show that the actual beauty of Milano is hidden, more in tune with its introvert personality if compared to Rome or Florence. One just needs to peek into certain private homes built after the big boom of the beginning of the 20th century, between 1880 and 1910, when the population doubled in an atmosphere of economic euphoria, to gauge the care given to the decoration of hallways, staircases, and elevator shafts. From Ca Brütta by Giovanni Muzio (1919-23) to Casa del Cedro by Giulio Minoletti (1951-52), marble, crystal and bronze were common building material. The photographs are sober, taken from the front, and of course respect the parallel character of the vertical lines. But the main interest of the book lies in the deciphering of all the decorative elements. Carrara marble or peach flower marble? Bianco Montorfano granite, or the red version from Baveno? Macchavecchia limestone breccia, Tivoli travertine or Trani limestone? All these precious details allow the viewer to nurture the feeling of beauty. Here we see an interphone which is a sculpture by Adolfo Wildt, over there chandeliers by Vico Magistretti or ceramic tiles by Giò Ponti, and further on a handrail designed by Ceramica San Paolo from Venice. Who said Milano is ugly?
 Entryways of Milan (in English and Italian), by Karl Kolbitz, Taschen, 2017, 384 p., 49.99.

Magnum is undoubtedly the most famous photography agency in the world. This coop founded in 1947 by three C - Capa, Chim, Cartier-Bresson -, and an R (George Rodger) made a name for itself in every field, with important reports for Life, Paris Match or Stern. Its members also published books of which we find here the first complete list. From Death in the Making by Robert Capa on the Spanish Civil War (1938) to Libyan Sugar (2016), the report by Michael Christopher Brown on the fall of Kadhafi, one leafs through a mostly macabre world, one in which wars succeed one another  be it Korea, Vietnam with Philip Jones Griffiths, and the Gulf war, etc.; followed by genocides, such as the ones in Cambodia, in Guatemala, and in Rwanda; revolutions, the one in Nicaragua with Susan Meiselas or the Arab spring; and environmental catastrophes like Minamata with Eugene W. Smith. We also look at prisons with Danny Lyon, poverty, famine, and draught. But we also discover very personal impressions on the Mennonite community with Larry Towell, on kitsch with Martin Parr, that of a mythical town like Valparaiso with Sergio Larrain or President Kennedys last trip: 8 hours in one of the 22 train cars that transported his coffin, with Paul Fusco.
 Magnum Photobook (in English), by Fred Ritchin and Carole Naggar, Phaidon, 272 p., 69.95.

His admirers keep fond memories of the catalogue of the first retrospective by photographer Eli Lotar (1905-1969) at the Centre Pompidou in 1993-1994. The 112 small format pages have now been replaced by a new edition in a larger format, with 224 pages, exactly the double. This is because over the last twenty years the Centre Pompidou received a new donation from collector Jean-Pierre Marchand, and a thesis by Damarice Amao let us better understand certain aspects of the photographers work. Therefore the new catalogue is very useful to complete what we knew well: the slaughter houses in la Villette, the Surrealist images, with complete chapters on his relationship with documentaries, such as the one with Joris Ivens on the polders in the Netherlands and with Buñuel in the Extremadura region in Terre sans pain) and on his portraits (Artaud, Bataille, Georges-Henri Rivière, etc.). The little kid from Bucharest, born in Paris from two Rumanian intellectuals but educated by his grand-mother and back in France only in 1924, without any luggage takes up his original position in the avant-gardes of the period between the two World Wars. His later years were not as productive, except for his relationship with Giacometti (exhibition at the Jeu de paume in Paris until 28 May 2017).
 Eli Lotar (in French and English), by Damarice Amao, Clément Chéroux, Michel Frizot, Cédric de Veigy, Pia Viewing, Jeu de Paume/éditions du Centre Pompidou/Photosynthèses, 2017, 225 p. 39.

Our world is nothing else but appearances and replicas, standard, silicone, global sites and beauties. Our world is also obsessed with amusement, and we are all constrained to more leisure activities due to our additional free time. Stefano Cerio merges the two themes by studying the backstage of these venues. Theme parks have flourished all over the USA with mountains in plastic and resin, but not only. He also found them in France, in Italy, and in China. Cerio explores them out of season, at night, and delivers images that reflect deadly, solitary, and decaying atmospheres. Artificial trucks, artificial planes, artificial sky-scrapers at Gardaland in Verona, Coney Island, Cinecittà Park in Rome: in the era of virtual reality and of 3D printers, these venues have in spite of themselves a certain charm that is difficult to define or date. In comparison to the laser, cardboard has a poetic side all to itself.
 Night Games (in English and Italian), photo Stefano Cerio, texts by Gabriel Bauret and Angela Madesani, Hatje Cantz, 2017, 128 p., 35.