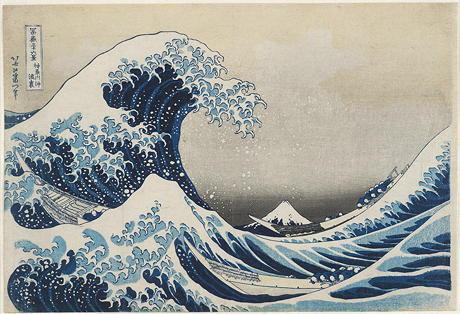 Hokusai, Under the wave off Kanagawa (The Great Wave) from Thirty-six views of Mt Fuji. Colour woodblock, 1831. Acquisition supported by the Art Fund. © The Trustees of the British Museum.

Hokusai, the Japan that never dies

LONDON  Give the name of a universal Japanese artist. Murakami? Kurosawa? Or rather Hokusai (1760-1849)? The 19th century painter continues to have an international aura. Each of his retrospectives is a success and two of his works have become true icons: his famous Wave and his Mount Fuji, taken from an album with 36 views. In spite of their formal beauty and the lack of means that fascinated both Van Gogh and Toulouse-Lautrec, the force of Hokusai resides in his biography more than in his prints. Like Michelangelo, like Titian, he embodies the eternal unsatisfied artist, who worked until his last breath. The exhibition focuses on this destiny by concentrating on his last three decades. At the age of 60, Hokusai was in the pits, impoverished by a prodigal grandson and mourning after his wifes demise. He devours his sheets of paper, producing flowers, landscapes and portraits. He was over 70 when he created the Wave and Mount Fuji, after the age of 80 that he painted his most beautiful dragons, which he continued until the age of 90, as he felt he was still making progress. He actually signed his last works with a specific seal so they would be identified as his best works. Hokusai aimed for immortality and reached it in his own way by refusing to give in to the logic of age. Retirement at 60? Forget it!
 Hokusai: Beyond the Great Wave at the British Museum, from 25 May to 13 August 2017. The exhibition will be closed from 3 to August to ensure the rotation of the pieces shown.

GRIGNAN  Here is an exhibition that allows us to quench our distaste for certain present things without paying too much: Madame de Sévigné! This lady, who was born in Paris at place Royale (which later would become place des Vosges) in 1626 under the reign of Charles XIII and died at Grignan in Provence in 1696, survives three centuries later through the sole grace of her letters. She wrote over one thousand, mainly to her daughter by unveiling her heart of a loving mother full of good thoughts. After most of us sit bent over our keyboards day and night, producing thousands of e-mails, who will take the time to read us 350 years from now, and to savour our expressions, our wording, and our passions? We can only hope someone will keep the hard disks. The exhibition is held at her son-in laws castle, where she herself passed away. It shows some of her letters, her amazing writing utensils including drying powder, pen sharpener, scissors for parchment, as well as paintings, engravings and objets dart, wrapping up all the myth born around this correspondence of which nothing was published during her life.
 Sévigné, épistolière du Grand Siècle at the château de Grignan, from 25 May to 22 October 2017.

LE HAVRE  One doesnt celebrate ones 500th birthday every year. Is this fever that surrounds birthdays a means to remember our own history? In the case of Le Havre, the number one port in France with its 175 000 residents, it allows us to remember that the port was the wish of François I. In 1517, two years after reaching the throne, the young king had sea ambitions that looked towards America. This celebration today takes on a particularly eventful aspect as the mayor of Le Havre, Edouard Philippe, has just been named Prime Minister by Emmanuel Macron. Dozens of installations, themed itineraries such as les Bassins, les Escaliers, le Port and, of course, the city of Auguste Perret, corresponding to the reconstruction following WW II, exhibitions (Pierre et Gilles, the archives of the French Lines, etc.) are all included in the program of this festive year. Foreigners, even those who do not know the city, have without knowing it a representation in their minds, the vision of Monet in Impression, soleil levant, the painting that founded the Impressionist movement.
 Un été au Havre, from 27 May to 8 October 2017.

In this newsletter we often criticize museums that get cold feet and show major artists  or well known in any case  rather than run the risk of choosing more audacious ones. The latest exhibit at the musée des Beaux-Arts in Lyon proves us wrong. It is completely dedicated to a nearly forgotten artist, Edouard Pignon (1905-1993), a friend of Picasso, and furthermore is focused on a given period of his work. These are seascapes of Ostende, the Belgian port he felt in love with after World War II and which he painted numerous times between 1946 and 1953, with the wind-whipped colored sails. Indeed, it was a donation by Pignons son that triggered off the event . But it remains worthy of praise just the same. For the museum sought out paintings from private collections in Belgium or Switzerland, from museums in New York, Luxembourg or Issoudun. The catalogue describes the genesis of this series. We learn Pignon left Collioure in the middle of the winter and left to Ostende, a real U-turn, replaces the artist back in the context of his time, with his commitments and his friends. A beautiful series of photographs by Agnès Varda in a workshop pushed him to go of on this pilgrimage: it was at number 23, rue du Moulin-Vert, in the 14th arrondissement in Paris, that Pignon dreamt of Ostende, in an apartment lent by Jean Cassou. There is no plate on the wall but the window on the 3rd floor is well there, the one that opened to the Northern light.
 Édouard Pignon, Ostende (1946-1953), under the direction of Philippe Bouchet, Hazan, 2017, 168 p., 30.