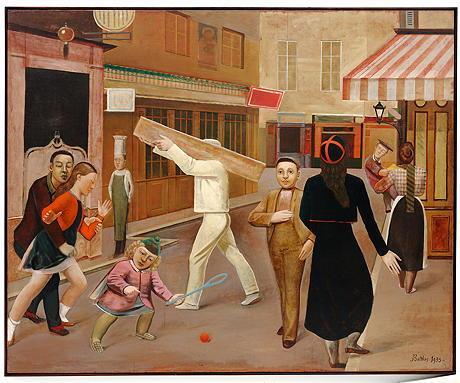 PARIS  Three revered giants if ever there was one. The oldest never really managed to ignore the aspersion his trip to Germany in 1941 cast on him, nor the belief of his critics that all of his creativity had dried by 1914. The second, a superman in the world of sculpture, lived for forty years in a modest Parisian workshop. The third and youngest, brought up in an impoverished but cosmopolitan family  his mother was Rilkes mistress -, shocked the public with his glazed erotic paintings before becoming the director of Villa Médicis, the French Academy in Rome. Derain (1880-1954), Giacometti (1901-1966), Balthus (1908-2001). For the novice, the former Fauvist hidden in Chambourcy has nothing in common with the tortured artist bound to Montparnasse and the great socialite from Rome. In spite of this they were friends for more than two decades and nourished the others works. This link went beyond their deaths, since twenty years after his friends demises Balthus dedicated a retrospective to each of them at Villa Médicis. Crossed portraits are not easy to create as they suppose a great control of cultural and biographic knowledge. Fortunately one easily sees how the forms and themes nudes, still lives- echo one another. Furthermore, shared networks such as Pierre Matisse, Antonin Artaud, and muse and mistress Isabel Rawsthorne give a human and at times fictional dimension to their friendship.
 Derain, Balthus, Giacometti. Une amitié artistique at the musée dArt moderne de la Ville de Paris, from 2 June to 29 October 2017.

Raphael, a life through drawings

OXFORD  Without a doubt this is a once-in-a-lifetime exhibition, as say the press release. Needless to add that the opportunity to see as many drawings by Raphael (1483-1520) brought together will not be repeated very soon. The Ashmolean had a head start since it owns the most important collection  formerly owned by painter Thomas Lawrence  in the world. But in order to up the ante and present two and a half times more works than the 50 existing ones, the museum had to turn to the Albertina in Vienna and its own 25 works, as well as to a great number of public and private collections. The ensemble allows the viewer to confirm the great artists versatility in using different techniques, the way he experimented with drawings, to admire his self-portrait believed to be from 1500, and his last creations in the hands and heads of apostles from 1520.
 Raphael. The Drawings at the Ashmolean Museum, from 1 June to 3 September 2017.

Requiem for a slide

LAUSANNE  Slide show evenings are memories of painfully putting the carrousel into place, hearing the noise of the ventilator, the clicking of the slides going through one after another, and the living room wall on which family vacations were projected. All of this has a sour taste of the past. One goes much faster now by sharing an unlimited number of photos over a smartphone or over the social media. Slides, in their white cardboard frame have existed since the end of the 19th century but they played their most important role in the decades following World War II. Today they are almost extinct and seen as objects to be studied. The aim of this exhibition is to show how photographers, designers and architects used them, from Lewis Hine to Fischli & Weiss, including Le Corbusier and the conceptual artists of the 70s.
 Slides. The History of Projected Photography at the musée de lElysée, from 1 June to 24 September 2017.

Peter Saul: ugliness as a weapon of massive destruction

FRANCFORT  He has something of Pop Art, as well as of Bad Painting, and of the Californian counter-culture  as a participant in the legendary exhibition Funk in 1967 at the Museum of the University of Berkeley. But Peter Saul, born in 1934, never received the recognition poured over Warhol and his likes. By nature he was definitely closer to the underground movement. His paintings of trashy drawings in bright colors are an acerbic interpretation of the consumer society and its values, of planetary idols such as Superman, of US imperialism as seen in the Vietnam War or the jail of Abu Ghraib, of social inequalities and urban violence. This is the first retrospective of such dimensions in Europe and shows a strange version of the American Dream.
 Peter Saul at the Schirn Kunsthalle, from June to 3 September 2017.

A Russian painter at war

A few months ago we discovered the surprising war drawings by Ossip Zadkine, presented in his museum. Here is another interpretation of the same Champagne front between 1914 and 1917, by a Russian compatriot. Zinoview, his espionage name for the Okhrana, the Czars police, worked in ambulances, lived in trenches, went through the mutinies of 1917, and left behind a true report on the numerous Russian troops. He used drawings, photographs, gouaches on paper, pigments and even wax on wood as materials were rare, to depict a heartbreaking and mortal reality, very different to the sparkling Belle Epoque he knew in Paris. He shows the injured, the dead and the mutilated, vigils and bombings, nightmares and fantasies. Once he returned to his life as a civilian, Zinoview toured the US with the Foreign Legion, and then changed life styles. He befriended Rivera and Picasso, took part in art salons, worked for music-halls where he designed costumes for Mistinguett, and died at the age of 89 in 1977, having survived more than half a century after the horrors of a war he never forgot.
 Alexandre Zinoview, un peintre russe sur le front français, directed by Cécile Pichon-Bonin and Alexandre Sumpf, Alternatives publishing house, 2017, 128 p., 24.

One of the most dynamic new photofestivals in France (photo: Sylvie Meunier) goes intimate

FONTAINEBLEAU - The 7th Festival of Art History (7e Festival de l'Histoire de l'Art) will be held from 2 to 4 June. With two main themes, Nature and the U.S.A.

GACILLY (Morbihan) - The 14th photography festival will be held from 3 June to 30 September 2017. This year it will pay tribute to Sub Saharan African photography.