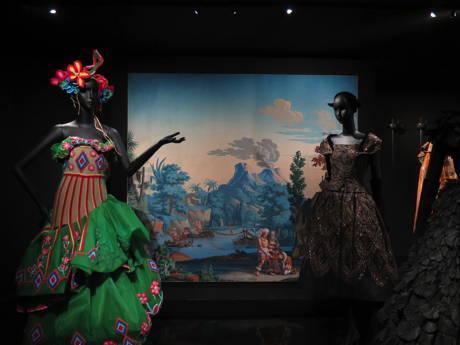 PARIS  In the photos taken in 1957, Christian Dior looks tired, worn out. It can easily be understood. He rose professionally like a rocket. He played an immense role in the world of fashion and in the countrys economy in the middle of the 50s, since he represented half of French exports in his sector, he employed one thousand persons, and was on the cover of Time magazine. His body did not resist such tension, and he died shortly after those photos were taken, in 1957, at the age of 52, from a heart attack in the thermal baths of Montecatini, in Italy. The 70 years covered in the exhibition were calculated from the opening of his house and his first, mythical, collection in February 1947 that was presented at 30, avenue Montaigne. It was immediately baptized New Look, and sent ripples all across the world. This retrospective describes this remarkable decade. It also opens up to what came after with the seven designers who followed him, from Yves Saint Laurent to Maria Grazia Chiuri, and also what came before. The scenography is very appealing, playing with the lights, the darkness, reflections, theatrical compositions, rapprochements  like the ones with an Arlequin by Derain or an allegory by Romaine Brooks. There is an abundance of dresses, suits, hats, shoes and accessories. But we also discover other lesser-known aspects, as for example Christian Diors career as a gallery owner. Indeed, in the mid-twenties, and together with his friend Pierre Colle, they were among the first to exhibit works by Balthus, Giacometti or Dalí in their space on rue Cambacérès. Given the wealth of the exhibition and the quantity of angles  enough to make you dizzy  visitors may be encouraged to behave differently, as the former amateurs of the Louvre or of the National Gallery did, and that would be to come back a number of times
 Christian Dior, couturier du rêve at the Arts décoratifs, from 5 July 2017 to 7 January 2018.

BILBAO  Bill Viola can surely be considered as a go-between: indeed he contributed to have video be seen as an art form in its own right. From his first experiments in the seventies full of a poetry that was exacerbated by the technical limits- up to his most recent works in which he uses the most sophisticated arsenal. The native of Queens in New York, born in 1951, went through every phase of this new medium. The immensity of the rooms of the Guggenheim give all the theatricality needed for this bulk of his work which often has a mystic dimension, in particular when fire turns into water, as in Fire Woman, or when the performer practices a real Christ-like ascension under the deluge, as in Tristans Ascension. The artist went through Florence when he was in his twenties, and he has reinterpreted, in his own way, the art of the old masters, as can be seen in a vibrant Annunciation (The Greeting) or in his series Catherines Room, a true, digital, altar step. An exhibition of Bill Viola is also a true ordeal, undoubtedly intentionally, for any visitor who is in a rush. Indeed the videos need to be looked at carefully for they follow a staged logic, or evolve in an almost imperceptible manner. We calculate that the whole projections represent more than 6 hours. The good news is that after such a marathon the bravest among the visitors will have a perfect excuse to enjoy a meal in one of the excellent restaurants of the museum or a tasty dish of pinchos in the old town!
 Bill Viola at the Guggenheim Bilbao, from 30 June to 1 November 2017.

Van Gogh in the woods

AMSTERDAM - Fontainebleau, his castle, his school (Primaticcio and Rosso), his forest. The latter, with its moss-covered undergrowth, its rocks, mushrooms, and ferns all attracted the painters of the 19th century, the pioneers of outdoor painting. Van Gogh followed that same schooling and also worked directly from the motive, as Corot, Théodore Rousseau, and Jules Dupré did before him. The exhibition explores this link by presenting some paintings from the museum, or interesting loans, such as the Pollard Birch, from the Van Lanschot collection.
 Van Gogh, Rousseau, Corot: in the Forest at the Van Gogh museum, from 7 July to 10 September 2017.

MADRID  Why is Sonia Delaunay celebrated in the Spanish capital in 2017? Well, because exactly 100 years ago this great traveler  born in Ukraine, died in Paris, lived in Saint-Petersburg, in Finland, in Switzerland, in Karlsruhe, and in Portugal  settled there with her husband Robert until 1921. The exhibition puts forward the afore-mentioned period, in which Sonia mingled with the high society and created a boutique, Casa Sonia, where she presented above all her textile creations.
 Sonia Delaunay at the Museo Thyssen-Bornemisza, from 4 July to 15 October 2017.

SAINT-PAUL-DE-VENCE - The sub-title In line with traditions has a rather ironic dimension since Arroyo, a Spanish painter born in 1937, in the midst of the Civil War, focused more on destroying them with his pungent portraits, or on reinterpreting them in his own way, like the altar piece of the Mystic Lamb by the Van Eyck brothers in Ghent. But his work does indeed have the traditional figurative dimension, which renders it very appealing to the public.
 Eduardo Arroyo. Dans le respect des traditions at the Fondation Maeght, from 1July to 19 November 2017.

Schiele from A to Z

He died at the age of 28 from the Spanish flu, which carried him without a doubt to the pantheon of the cursed artists. What would he have produced, had he lived longer? The work of Egon Schiele (1890-1918) is so abundant and, most of all, so audacious, that one wonders if he had not already said it all. Whether we consider his surprising landscapes that resemble colorful inlays, or his portraits that perfectly grasp the models psychology, or even intimate scenes with no cover-up (including masturbation and various embraces), one is surprised by the very mature look this twenty year old man had. One needs to be strong to leaf through this large, 7 kg book, a true catalogue raisonné covering the years 1909 to 1918 (with 221 paintings studied in detail). But it allows us to enter the intricacies of this creation and to study his evolution from work to work, from his beginnings under the influence of Klimt  whom he drew in black stone on his death bed in February 1918  up to the war years and his encounter with Edith Krams, the essential model and briefly his wife, who died three days before him, pregnant, on 28 October 1918.
 Egon Schiele. The Complete Paintings 1909-1918, directed by Tobias G. Natter, Taschen, 2017, 612 p., 150.