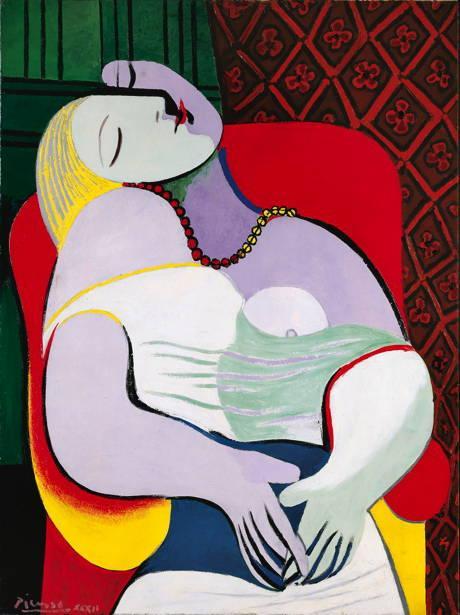 PARIS - Serge Gainsbourg had chosen another vintage year. But according to the curators of the current exhibition at this Parisian museum, 1932 was the erotic year par excellence for Picasso. They have enough arguments to demonstrate it. The masters production, which on that year had just gone over the 50-year milestone  and felt young and vigorous!  hides numerous, subliminal images, such as the phallus that appears over the smooth face of Marie-Thérèse (the Dream). His young muse, met in 1927, inspired in him sensual works. But the year 1932 was also a turning point for many other reasons. Though Picasso had already put his imprint on the world of art since the 1900s, it was indeed in 1932 that he truly reached the status of the master no one could ignore. It was then that Christian Zervos started the publication of his monumental catalogue raisonné and that Picasso  the greater symbolic consecration  appeared in the highly respected Petit Larousse dictionary. Two highly regarded institutions, the galeries Georges Petit in Paris (as of 16 June 1932) and the Kunsthaus in Zurich (as of 11 September), dedicated a retrospective to the Spanish artist with nearly 200 of his works. Even today, statistics show that two of Picassos four most expensive paintings were also from 1932: the year of The Dream as well as a long series of Crucifixions. The way in which the paintings are hung, one month after another helps the viewer follow Picassos life, in which he combined concerts by Poulenc, movie projections (Les Cyclades by Vitrac), boxing galas (on 29 February!), visits to the Automobile Fair, or night in Swiss palaces.
 Picasso 1932. Année érotique at the musée Picasso, from 10 October 2017 to 11 February 2018.

PARIS  Like connected vases, Picassos love for Marie-Thérèse grew while that for his wife Olga diminished drastically. It led to the birth, on 5 September 1935, of María de la Concepción, nicknamed Maya since the little girl could not pronounce her name. Among his four children, it was probably with her that the artist created the strongest and most lasting bond. The exhibition shows the numerous drawings the lively little girl inspired to her father during her childhood. As she slowly developed into a teenager the fascination waned, and another form of complicity settled in. Maya accompanied her father to the bullfights and in his ravels (for example to Perpignan), and she also played a pacifying role in the tensions with his companion Françoise Gilot, the mother of two of his other children. Her role went beyond the family circle as she was actually her fathers assistant during the grueling shooting of Mystère Picasso by Clouzot, at the Studios de la Victorine in Nice, during the summer of 1955. She also managed the comings and goings of photographer Edward Quinn, who left some of the most beautiful images of the painter. It seems to run in the blood, since Diana Widmaier-Picasso, the daughter of Maya and granddaughter of Picasso, was the curator of this exhibition. Though she never met her grandfather, who died a year before her birth, she obviously drew her knowledge from the best sources.
 Picasso et Maya, at the galerie Gagosian, from 19 October 2017 to 22 December 2017.

MADRID  When Picasso arrived in Paris, in October 1900, he was fascinated by Toulouse-Lautrec, who only had a year left of his short life  he died at 37, while Picasso survived him 72 years. He two men were neighbors in Montmartre, but they never met. Yet the influence of the champion of the Moulin-Rouge lived for a long time in the portraits, nudes, and scenes of prostitution by Picasso. The nearly one hundred works in this exhibition show that the number of interests the painters shared was not limited to a few themes, but rather had much deeper roots. We can see it in their obsession for drawing, their empathy for the underworld, in the construction of a few archetypes  the drinking woman, the acrobat, or Harlequin. The exhibition is lit by interesting duals that show how their work answered one another in an interval of a few months, such as in In a Private Dining Room (At the Rat Mort) by Toulouse-Lautrec (1899) and The Wait (Margot) by Picasso (1901), two portraits of free women.
 Picasso-Lautrec at the Museo Thyssen-Bornemisza, from 17 October 2017 to 21 January 2018.

In 1889, a road-show attracted crowds in the USA. In each town it went to tens of thousands of persons followed the convoy. Was it Buffalo Bill? Or a star from the music hall? The last Indian Chief or the winner of the Civil War? None of those. It was a simple painting, one single painting, the most famous of the times: the Angelus by Millet, which a group of American amateurs had just brought from France for the fabulous amount of 553 000 francs. A few years later, Chauchard, the owner of the Louvre department store, bought it back for 800 000 francs, the equivalent of various millions of our euros today. The purchase was then saluted as a patriotic gesture. Today, Jean-François Millet (1814-1875) is greatly ignored, and his last, wide retrospective in France dates back to 1973. This painting alone has remained an icon. But a new exhibition in Lille (at the Palais des Beaux-Arts, until 22 January 2018) intends to peal off the veil of neglect to remind the public of the extraordinary approach the painter had of the peasant life. The task is bestowed to an original catalogue, in a square shape, made up of two volumes glued to one another, under one same cover. The first volume runs through the painters life  a native of the Cotentin region on the Western part of Normandy - his self-portraits, his rare nudes, but especially his Winnowers, his Sawyers, his Shepherdesses, his Gardeuses doies and his Gleaners, scattered throughout the world, from Cincinnati to Cardiff, from Tokyo to Williamstown. The second volume reminiscences his surprising posterity in the USA, which has never waned, his influence on painting (Edward Hopper), on documentary photography (Lewis Hine, Dorothea Lange, Walker Evans) and, above all, on movies: Roman Polanski, Gus van San and Terence Malick are great amateurs of his art which openly inspires them. A French artist, a contemporary of Millet, Jules Breton, gave a brilliant explanation of his aura: He can take a rough field in which lies a cart, a field sparsely covered with thistle, and with two or three tones and a careless and wooly technique, he can move you to the deepest depths of your soul and sing the infinity. Although the founding event of 1889 is barely mentioned, it is a useful companion for lovers of Millet.
 Millet, Réunion des musées nationaux, 2017, 256 p., 35.

BRUSSELS and Belgium - The Europalia festival, dedicated to Indonesia, is being held from 10 October 2017 to 21 January 2018.

The museum is celebrating the 60th birthdray of the Friends of S.M.A.K. (Piano by Andreas Slominski, photo Dirk Pauwels)