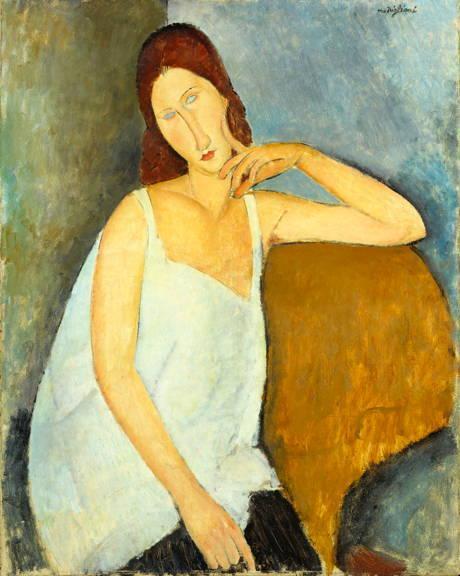 LONDON  Any museum or gallery that exhibits Modigliani (1884-1920) today, is sure of having a full house. Indeed, the character, due to his cursed and novel-like life, is a favorite of all large museums. He would surely be very surprised, given that at the age of 33, in 1917, during an exhibition in the galerie Berthe Weill in Paris, where he had settled, he only sold a handful of works and was furthermore accused by the police commissar of obscenity for painting nudes with pubic hairs. This show brings together some one hundred works, of which a fourth part are from private collections, and it includes a beautiful series of nudes. But its strength lies in the portraits: that of his agent Zborowski, his friends Cocteau, Picasso, Juan Gris, Survage, and his lovers, such as Beatrice Hastings. The main merit of this exhibition is to render visible the paradox at the base of Modiglianis art. He first painted in a style inspired by Cézanne, and he only reached the style so recognizable today  long faces, almond shaped eyes without pupils, designed eyebrows and noses -, after going through a fundamental experience, sculpture. Nine heads in limestone, done in 1911-12 and presented here on trunks, show his work of simplification, mainly influenced by African art. Modigliani transferred this directly to his painting. While the pathetic end of is life is known by all - alcohol, death due to tubercular meningitis, followed by the suicide of his companion Jeanne Hébuterne, who was pregnant-, an experience of virtual reality allows the viewer to plunge into the atmosphere of his workshop. Wearing a heavy helmet, we find ourselves propelled into the disorder of rue de la Grande-Chaumière: the uneven flooring, the smoke from the Gauloises cigarettes, the open cans of sardines, the paintbrushes dripping with oil, and the easel placed as to avoid the leaks from the ceiling
 Modigliani at the Tate Modern, from 23 November 2017 to 2 April 2018.

CHAMBÉRY  He had a very short career, barely seven years. Anselme Boix-Vives did not die young, like Schiele, Raffaello or Modigliani. No, he was 70 years old when he died in 1969. But actually, he discovered his vocation late in life, and it became an obsession, like many of those creators simply categorized as outsider brut. A native Catalan, Boix-Vives settled in the Tarentaise region, in the Alps once he retired from his job in the food industry. He suddenly started painting, assiduously, in his kitchen. He found his inspiration in the surrounding nature, in his childhood memories, or in the TV, at the time of general de Gaulle, that was on constantly. He thus produced more than 2400 surprisingly and profusely decorative works, i.e. one a day throughout his life as an artist. They include entombments, portraits of Pope Paul VI, or the skiers he saw from his window  part of his life, as his son Laurent bought the ski equipment company, Rossignol -, and what he called the very noble mountain priest, or pretty pipe smoking woman. All these motifs are drawn in his vivid and frantic palette.
 Anselme Boix-Vives at the musée de Chambéry, from 25 November 2017 to 11 March 2018. Catalogue Fage.

A lake in Finland

PARIS  As is well known, the Japanese culture had a huge influence on Van Gogh and Toulouse-Lautrec, to mention but a few. But how did that reach them? In a country that was largely closed to the rest of the world until the beginning of the Meiji period (1868), exchanges were mainly carried out through the Dutch trading posts, or through China. In 1867 Japan was present at the universal Exposition in Paris and created a great shock. Then kimonos, sabers, lacquers and other wonders started to flow into France. This exhibition traces the beginnings of this Japanese fever.
 A laube du japonisme, at the Maison de la culture du Japon, from 22 November 2017 to 20 January 2018.

An Immaculate Conception by Murillo in the cathedral in Sevilla (Photo R. Pic)

Murillo would be 400 years old

SEVILLA  Murillo was a star during the 17th century, when all the convents in the city commissioned works from him. He was then eclipsed under the enlightened Bourbon despotism, before an extraordinary period in the 19th century. The great Spanish artist (1617-1682) was then very popular among Napoleons dignitaries: marshal Soult for example practically swept up all he could get his hands on. The painter is often over identified to his major theme  the Immaculate Conception  which all wealthy parishes fought for. But his success throughout Europe was due in particular to his picaresque portraits of children off the street. The ambition of the Murillo year, in honor of his 400th centennial, is to present all the facets of his production. As the various exhibitions and events follow one another  gastronomy, concerts - for nearly 18 months, this tribute will have us discover a few of the hidden treasures, among them the Archdioceses collection.
 The Murillo year begins on 28 November 2017.

The secret garden of Marie Laforet

PARIS  In this era of stars, in order to enter their intimacy, one can leaf through reports in specialized magazines, photos  whether stolen or not -, talk shows. But in the case of an iconic figure such as Marie Laforet, the goddess with the green eyes who in her first role in Plein Soleil, with Alain Delon, made temperatures soar more than any sun, one can be quite happy to read between the lines. That is, to see the objects she collected and was fond of throughout her life. This auction is a perfect opportunity. It is her collection of works of art, auctioned by her great friend Cornette de Saint-Cyr. This is also an opportunity to remember, or to learn, that in the various occupations throughout her life she also had an art gallery, and was even an auctioneer! Here we have therefore prints from the Revolution, baroque red chalk drawings, abstract drawings from Tutundjian, as well as a letter dated in 1911 from Picasso to Max Jacob, in which he mentions collector Franck Haviland. These are the encounters of our times, as these three characters are represented in portraits in the exhibition on Modigliani in London.
 Collection Marie Laforet, 28 November 2017, at Drouot-Richelieu (Cornette de Saint-Cyr).

The list of his works is impressive. In three decades, at the end of the 18th century, Claude-Nicolas Ledoux (1734-1806) produced as much as all of todays greatest stararchitects. With one small difference: today, teams of hundreds of helpers surround each architect. As an example, he designed 54 pavilions for the wall around Paris, named the wall of the Fermiers généraux. The Revolution and the end of the tax paid at the entrance to Paris put an end to the program, but a mere 43 of these projects had already been built, all in his favorite style inspired from classical architecture, with Doric columns, frontons, arcades, friezes, etc. Prior to those constructions, Ledoux had already left a series of private homes, in particular for Madame du Barry in Louveciennes, as well as bridges, churches, troughs, and theaters, among others. Both a Stakhanovist and a utopist professional  he designed spherical buildings to which the famous camemberts by Manolo Nuñez in Marne-la-Vallée are a tribute -, a greater part of his constructions has disappeared. This book brings back a part of his lost heritage, through recent models made based on his drawings. They are exhibited at the salt mines of Arc-et-Senans, the most important of his works still standing. These models show his obsession with pure forms, with symmetry, with excesses. This is a very special mixture, which later inspired a number of prophets of Socialism  the phalansteries -, as well as architects of totalitarian systems.
 Le musée de maquettes Claude-Nicolas Ledoux, by Dominique Massounie, hartpon publishing house, 2017, 176 p., 20.