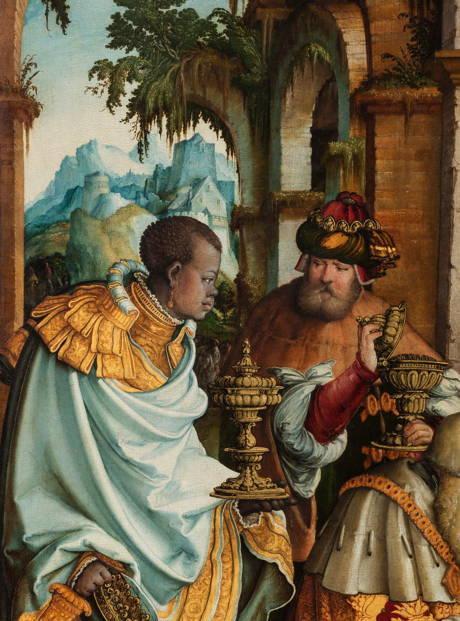 Master of Messkirch, The Adoration of the Magi, detail from the middle panel of the former high altar of St. Martin in Messkirch, around 1535/40, wood, 165.7 x 92.8 cm, Messkirch, Parish Church © Erzbischöfliches Ordinariat Freiburg i. Br., Bildarchiv, Aufnahme Michael Eckmann

The mystery of the Master of Messkirch

STUTTGART  No one knows the real name of the artist, except for his surname, the Master of Messkirch. He left us one of the most moving works of the German Counter Reformation, in the church of Saint-Martin, in Messkirch, in Baden-Württemberg. It is a true bastion of Catholicism with its dozen, extensively decorated altars. While today it is almost impossible to remain anonymous, this genius of color and physiognomy does not even have a name to go by. In order to classify him in dictionaries, he was given the name of the church he worked in. It is deemed he knew Dürers work, the prints in any case. And he may have participated in the workshop Hans Baldung Grien. He has been traced back to circa 1530-1540 at Sigmaringen, a town on the Danube where he worked for the Hohenzollern, which became famous 400 years later when it welcomed another type of celebrity, marshal Pétain and the last proxies of the French collaboration. Blue colored mountains in the background, the Three Magi richly and brightly clothed, fantastic architectures invaded by vegetation, such its the remarkable Adoration of the Magi, which has never left the collegiate church. On the other hand, a great number of elements have been scattered throughout Germany, Switzerland, and the rest of Europe  including Warsaw, Moscow, Maastricht, London-, all the way to the U.S.A. (Philadelphia, Minneapolis). Nothing reached France, Italy, nor Spain. This first retrospective can give these poor countries the unique opportunity to discover this unidentified genius.
 Der Master von Messkirch at the Staatsgalerie, from 8 December 2017 to 2 April 2018.

Iolas, a house in Athens

ACIREALE (Sicily) - Certain gallery owners in the period after the Second World War had biographies full of upheavals, the war and exile causing most of them. Leo Castelli (1907-1999) comes to mind right away, the Jew from Trieste who became emperor of Abstract Expressionism in New York after a period in Paris. There is also of course Daniel Cordier (born in 1920), who was secretary to Jean Moulin. Alexandre Iolas (1907-1987) is surely one of these personalities. A Greek from Alexandria, a dancer in the troop of the marquis de Cuevas, who switched to art dealing after a wound, was a great defender of Pop Art and of the New Realists. He was a nomad between Paris and New York, but remained attached to Athens where he had an extraordinary house built in the district of Aghia Paraskevi. In the 80s, when he decided to donate his collection to the Greek State, a press campaign accused him of dealing illegally in art works, of cheating the Greek tax system, and so forth. His collection was refused, and when he died his house was looted and fell to ruins. Could it be saved now, and complete the project imagined years back, to turn it into a center of contemporary art? The point of departure of the exhibition is the gallery of the Credito Valtellinese in Milano, where Iolas set up his last exhibition in 1987 with the Last Supper by his friend Warhol. They both died a few months apart. The aim is to mobilize energies for this utopic project, but it also means to refer to an unusual place through works of art that were exhibited there and 3-D reconstitutions, entrusted to local students.
 Call for Iolas House at the Palazzo Costa Grimaldi, from 14 December 2017 to 25 February 2018.

TURIN  We all know the word samurai, but that of ninja a little less. We usually associate it to turtles, and actually it means shadow warriors. The word bushido (the ethics of the warrior) or shuriken (the blades) are even more foreign to us. Any time we foray into the Japanese civilization we need a specific terminology, one that reflects a codified world. While we wait the major exhibition at the musée Guimet on Japanese armor, to open on 15 February, here we have an afore taste of this world of weapons, that will give birth to the first police corps, the torimono.
 Ninja e samurai at the Museo darte orientale, from 8 December 2017 to 2 April 2018.

Aristophil, the beginning of a marathon

PARIS  The insolvency of Aristophil in 2015 did not go by unnoticed. The investment fund, specialized in the purchase of letters and manuscripts, had attracted and then swindled some 18,000 investors, for an amount close to one billion euros, and had set up a luxurious museum on boulevard Saint-Germain to exhibit its most beautiful pieces. Among them were a manuscript by Einstein on relativity, and the roll of Sades Les 120 Journées de Sodome. The leaders have been accused of conspiracy to defraud, and the company is now in liquidation. The Aguttes auction house has been entrusted with this colossal task, with 130,000 works of art listed, and it will keep it busy for many years. This original sale gives us an afore taste, with precisely- Sades manuscript (lot 39, modestly estimated at 4 million , that is, a third of the amount paid by Aristophil), as well as drawings by Warhol, photos by Lartigue, and letters by Proust. Certain lots seem more accessible such as the gold book of Mme Bulteau that holds numerous writers autographs, and among them a sonnet by José Maria de Heredia (lot 48, 800). But people should be weary of the bullish effect of the enthusiasm around this sale.
 Les collections Aristophil, vente inaugurale 20 December 2017 at Drouot-Richelieu (SVV Aguttes).

A figurative artist who created the 36 painted canvases for The Lady and the Duke, a film by Rohmer

Our selection of new exhibitions in galleries

This catalogue, which accompanies the first retrospective dedicated to French tenebrist artist Nicolas Régnier (at the Musée darts in Nantes until 11 March 2018), has the virtue of offering true notices with provenance, which is something increasingly rare in most publications. In the case of this painter who enjoyed some very specific themes, such as Mary Magdalene of carnival jokes (in one of them, a lit mesh was put under the nose of a person asleep)  it is always exciting to know who owned these works over the last three centuries. Régnier had a very long life, of which he spent the largest part in Italy: first in Rome (from 1620 to 1626), then to Venice (from 1631 up to is death). Maps explain his different residences: he was mobile like an ambitious youth in Rome (five different addresses), stable as a known painter in Venice (he never left the parish of San Cassiano). He was capable of the most beautiful chiari oscuri just like his inspiration, Caravaggio (whom he never met), was a virtuoso of physiognomy, of skin textures and of looks. But Régnier has also been admired, strangely enough, for his court portraits, in particular of the Farnese family) which on the contrary are starched, static, and look like wooden puppets.
 Nicolas Régnier, lhomme libre, directed by Annick Lemoine and Adeline Collange-Perugi, Musée darts de Nantes/Liénart, 2017, 272 p., 33.

FERRARA - The MEIS (Museo Nazionale dellEbraismo Italiano e della Shoah), dedicated to the Italian Jewish community, opens its doors on 14 December 2017 in the former municipal prison on via Frangipane.

JAEN - The Museo Ibero, dedicated to the culture of the first millennium B.C. was inaugurated on 11 December 2017. As in the case of Ferrara, it is set up in the former prison.

MANNHEIM  The new building of the Kunsthalle, designed by gmp architects, si presented to the public on 18 December 2017. The inauguration with the collection will take place in June 2018.

POITIERS  The Confort moderne, which opened in 1986 in former warehouses, will reopen on 16 December 2017 after 18 months of a renovation campaign. The cultural space hosts concerts and exhibitions.